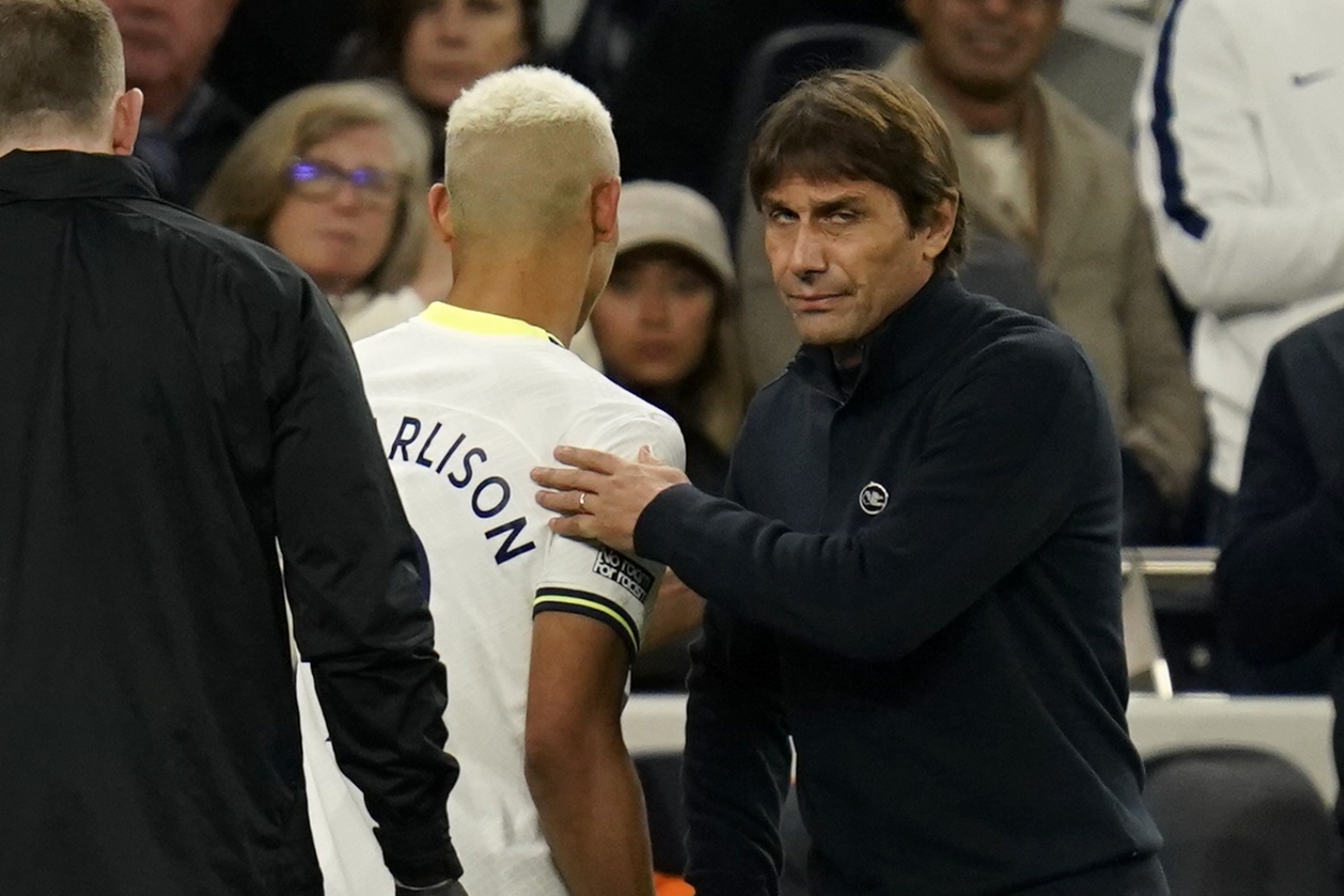 Antonio Conte is toying with the idea of sticking with Tottenham’s favoured 3-4-3 formation for the midweek trip to Manchester United despite a lack of attacking options.

Spurs will be without Richarlison (calf) for the clash at Old Trafford on Wednesday and Dejan Kulusevski is not expected to be fit enough to start after struggling during the last month with a hamstring injury.

When Richarlison was forced off in Saturday’s win over Everton, Conte switched to 3-5-2 with Yves Bissouma again impressive.

Bissouma has caught the eye in a three-man midfield in victories against Leicester and Brighton, but the Tottenham manager hinted he may stick to what he knows best.

“I have another training session to make the best decision,” Conte explained.

“You know we like to play with a 3-4-3 with the three strikers and if we can’t change, I prefer to continue to play with the 3-4-3 otherwise we find a solution.

“I think we have the possibility to continue to play with the 3-4-3.

“Lucas Moura now is recovered from his injury, also (Bryan) Gil is making big progress and then I have Ivan Perisic. He can play like a striker. He did this in the past and he can do it again on Wednesday.”

Conte had religiously stuck with his favoured system prior to Kulusevski’s injury last month but has tinkered in his absence.

The Sweden international was only expected to miss a couple of weeks but has sat out Tottenham’s last five matches.

Kulusevski was not completely ruled out of Wednesday’s fixture with United and yet Conte knows no risk can be taken with the 22-year-old.

He added: “The medical department are working to recover him, but at the same time, sometimes there are situations that you have to go a bit slowly and not to accelerate the process.

“Because sometimes if you accelerate the process, you risk only to worsen the situation. For this reason, we need to have patience.

“The player is important in this moment, in this period, to help us because his feeling is so important. We hope to have him in the squad very, very soon because you know very well, Deki is an important player for us.

“Richy is another important player for us. We need to play many games in a short period of time. We need to have the whole squad available.”

Kulusevski is one of several Spurs players who will not head out to Qatar next month for the World Cup.

Conte could have up to 13 first-teamers staying in England and while they will get a short period of holiday, he is hopeful of taking a group abroad for warm-weather training while top-flight football is paused for six weeks.

“I gave my idea to the club. For sure I think every team will go to have a bit of rest – 10 days to two weeks – and then you need to make the best solution,” he said.

“Then I would like to go to a place where the temperature is good, to stay there and have good training sessions and wait for the players to come back from the World Cup.

“At the same time you have to understand if the club can help me to do it or we have to stay in London but for sure I gave them my idea.”