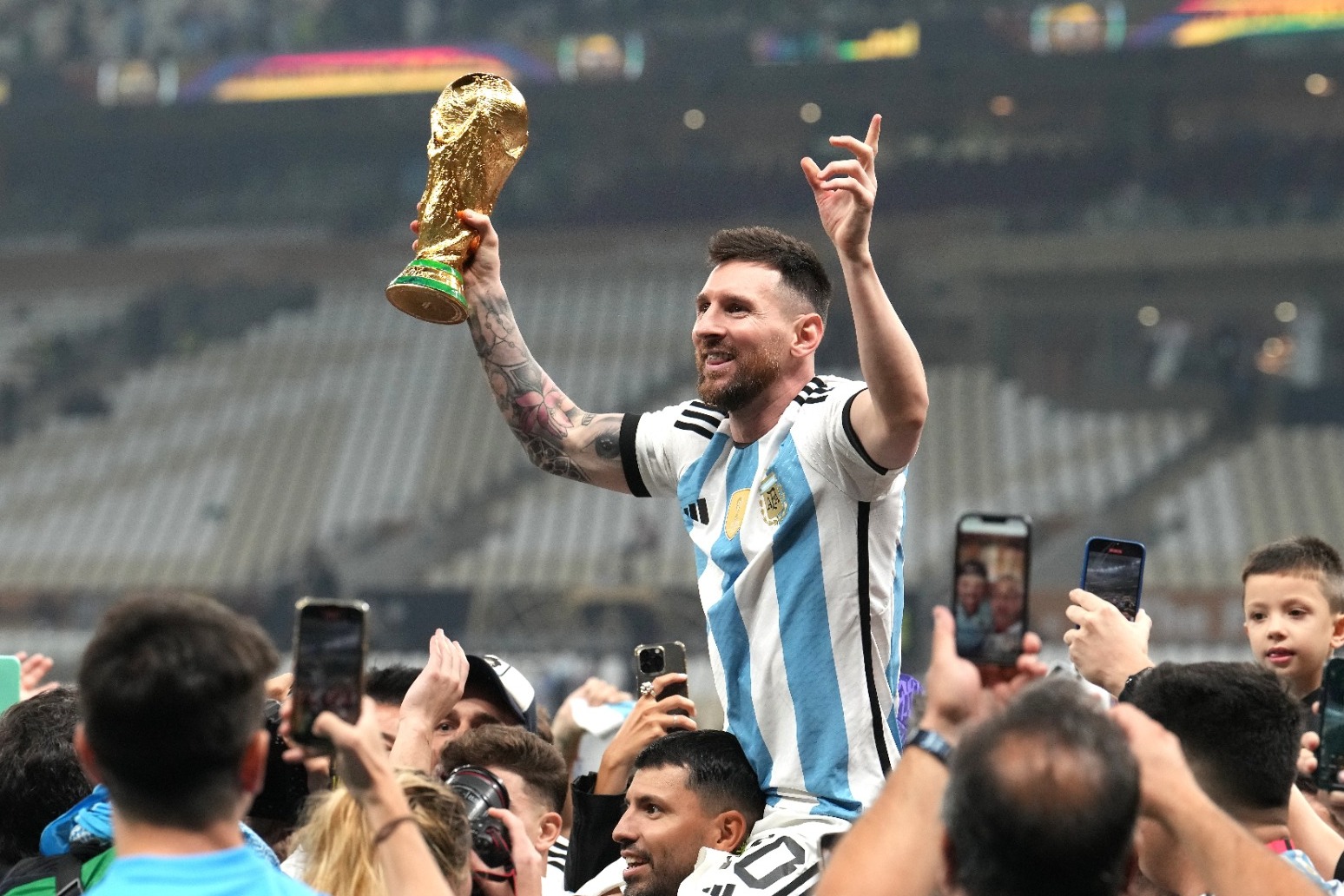 Lionel Messi is celebrating a dream, career-defining World Cup triumph as Argentina won the most dramatic final in history on penalties after Kylian Mbappe’s hat-trick had kept holders France alive.

After 63 matches and a thrilling month of action, Sunday’s breathless finale was the wildest conclusion anyone could have imagined to the first finals held in the Middle East and Arab world.

Messi came to Qatar looking to crown a glittering career by leading Argentina to a third World Cup triumph and managed just that after a staggering 3-3 draw ending in a 4-2 shootout victory against France.

Messi converted his effort in the shootout having opened the scoring on Sunday with a first-half penalty that was quickly complemented by Angel Di Maria’s fine goal against meek France, only for Mbappe to spark them to life.

The 23-year-old scored twice in 97 seconds to take match beyond 90 minutes and became the second player to score a final hat-trick when cancelling out what had looked to be an extra-time winner by Argentina’s captain.

But this was Messi’s final. This was Messi’s tournament – one that ended with him lifting the trophy aloft at the same ground where they suffered a humiliating loss to Saudi Arabia just 26 days ago.

The 35-year-old’s fifth and final appearance at this stage ended in glory as he captained them to their first World Cup triumph since the late, great Diego Maradona did so in 1986.

It was a blockbuster ending to one of the most controversial World Cups in history, with Qatar’s treatment of migrant workers and criminalisation of same-sex relationships among the key issues.

FIFA president Gianni Infantino labelled it the best ever, but Human Rights Watch’s Minky Worden says it will be remembered “as the most expensive sporting event ever – and the most deadly”.

The organisers have largely kept quiet throughout a tournament that ended with a star-studded crowd joining the Argentina fans that have turned Qatar sky blue over the last month.

Lionel Scaloni’s team flew out of the blocks in Lusail and looked up for the fight against jittery France, whose poor start was punished midway through the first half.

Di Maria brilliantly beat Ousmane Dembele and hit the deck as the France forward attempted to halt him leading referee Szymon Marciniak to point to the spot.

Messi stepped up and fired into the bottom right-hand corner as Hugo Lloris went the wrong way and things got worse for France in the 36th minute.

Alexis Mac Allister played onto Messi and darted forwards. The skipper sent a beautiful flick to Julian Alvarez, who put the Brighton midfielder through to send a low first-time cross to the far post for Di Maria to score.

Didier Deschamps responded by bringing on Marcus Thuram and Randal Kolo Muani. Dembele and a fuming Olivier Giroud made way as France failed to muster a first-half shot.

The match looked over as Argentina continued to be on top. Rodrigo De Paul saw a volleyed effort saved and Lloris denied Alvarez, with France taking until the 68th minute to register any shot.

The final appeared to be petering out, only for Nicolas Otamendi’s overzealous defending to give France a chance from the spot.

Marciniak awarded a penalty for the foul on Kolo Muani and Mbappe beat Martinez with an 80th-minute goal that sparked an astonishing turnaround.

Coman dispossessed Messi at the start of a move that ended with the 23-year-old meeting a return ball from Kolo Muani with a fizzing low strike past Martinez. An amazing hit, a remarkable moment.

Thuram was booked for a dive in the box as France sought a late winner, with Mbappe trying his best and Messi seeing a shot stopped before extra-time.

The opening period was as tight and cagey as you would expect at the end of an exhausting tournament, with Lautaro Martinez’s strike and fellow sub Montiel’s follow-up blocked towards the end of the first period.

Messi was denied when play resumed and looked determined to drag his side to victory and seemed to have done just that with 108 minutes on the clock.

The skipper turned home from close range after Martinez’s initial effort was saved, with the ball crossing the line before Jules Kounde could hack clear.

It was a stunning moment but the drama was not over.

Montiel handled Mbappe’s shot and the 23-year-old dusted himself down to send Martinez the wrong way, completing his hat-trick and taking the match to penalties.

It nearly did not get that far, though, as Mbappe’s cross just evaded Kolo Muani before the substitute was denied by goalkeeper Martinez at the death.

The France star and Messi scored the first goals in the shootout, but Coman was denied and Tchouameni missed as Argentina won a heart-stopping showpiece.