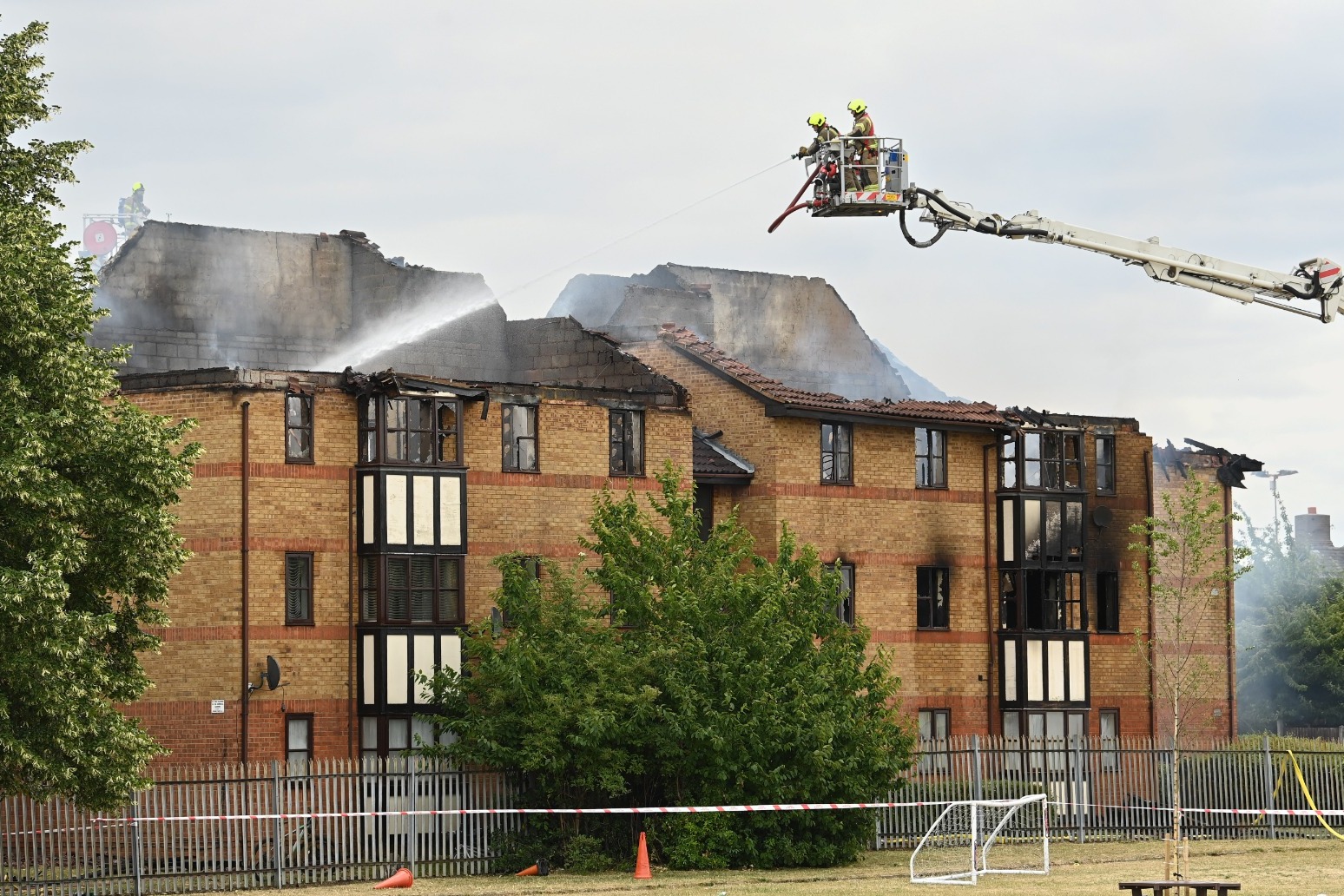 At least one person has died after a huge fire at a block of flats, with emergency services braced to discover more deaths as they search the scene.

Two casualties were taken to hospital with serious injuries and a firefighter was also admitted with smoke inhalation after a gas explosion caused what was described as an “inferno” at the building in Redwood Grove, Bedford.

Speaking on Monday afternoon, Bedfordshire Police Chief Superintendent John Murphy said it is possible more fatalities will be discovered in the coming days as emergency services work through the wreckage, with some people still unaccounted for.

“Very sadly we know that at least one person has passed away in the explosion today,” he said.

“There is a possibility that there will be more fatalities discovered in the coming days as we continue to search through the scene and a number of people, as my colleague from the fire services has identified, were injured as well today.”

Bedfordshire Fire and Rescue Service described the blaze as a “major incident”, while a local resident said they saw one person leap from a second-floor window to escape the burning building.

Bedfordshire Police at first said two people had been taken to hospital, one with serious injuries, as emergency services responded to the fire at the three-storey block of 20 flats, which caused the building’s roof to collapse.

East of England Ambulance Service (EEAS) later said there had been three hospital admissions, one of whom was airlifted to Addenbrooke’s Hospital with leg injuries.

The other two, including a firefighter, were taken to Bedford South Wing Hospital with smoke inhalation.

The firefighter has since returned home, emergency services said.

Police said the “working assumption” about what sparked the fire was gas-related but that an investigation had been launched to formally establish the cause.

Residents were urged to visit the nearby John Bunyan Centre if they needed support, as emergency crews were working to return people to their homes safely.

Adam Fisher, a 37-year-old sales worker whose office is nearby, said he heard a “huge explosion” before witnessing “an inferno” at the site and people screaming.

“A huge explosion heard – everyone went to our work car park to see what was happening,” he told the PA news agency.

“Our building is adjacent to the apartment complex – immediately an inferno (was) visible, huge smoke cloud billowing, people screaming and people frantically calling for emergency services.”

Mr Fisher shared footage on Twitter which shows plumes of flame erupting from the building as fire engines shower the blaze with water.

Another Bedford resident, who wished to remain anonymous, said they saw a person jumping from a second-floor window to escape the burning building.

“I heard the explosion from my house round the corner,” she told PA.

“I walked to town and saw the flames and also witnessed someone jump from the second-floor window while flames were blaring out.”

The fire service said in a statement: “Bedfordshire Fire and Rescue Service are currently in attendance at a major gas explosion on Redwood Grove, Bedford.

“There are currently six appliances, two water carriers, an incident command unit at the scene.

“Please avoid the area and keep windows and doors closed.”

Bedfordshire Police said police, fire and ambulance services all remained at the scene shortly after midday on Monday.

“(The fire) has engulfed the whole building and caused a large portion of the roof to collapse,” a statement said.

“An emergency assistance centre has been set up by Bedford Borough Council, at the John Bunyan Centre in Bedford, for people who have been evacuated and need support.

“An adjacent block of flats has also been evacuated and we are working as quickly as we can to get people back into their homes as quickly as possible.”

An EEAS spokesman said: “We were called at 9.33am today to a significant fire at a block of flats in Redwood Grove, Bedford.

“Three ambulances, the hazardous area response team, a tactical commander, three operations managers and the Magpas Air Ambulance were sent to the scene.

“One person was airlifted to Addenbrooke’s Hospital for treatment for leg injuries, while two people, one of whom was a firefighter, were conveyed to Bedford Hospital South Wing with smoke inhalation.”

Nearby Shackleton Primary School was evacuated as a result of the fire, with headteacher Andy George saying in a statement: “Following the fire in the Redwood Grove area of Bedford earlier today, pupils at Shackleton Primary have been sent home due to the school’s proximity to the incident.

“All children are safe and the school is working with the emergency services.

“The school expects to reopen tomorrow.”