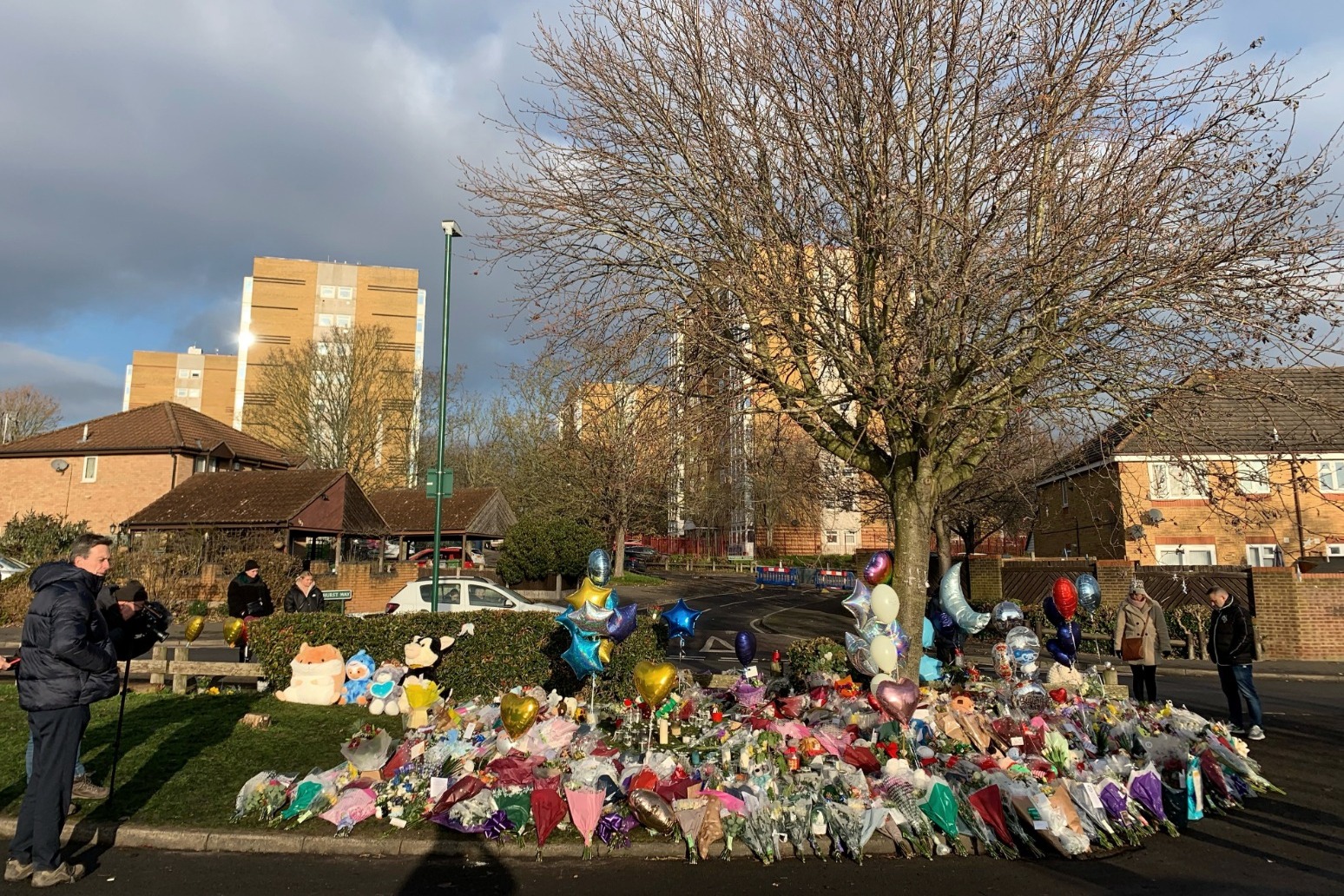 A six-year-old boy has become the fourth child to die after falling into an icy lake in Solihull.

The youngster had been fighting for his life in hospital since the incident at Babbs Mill Lake, Solihull, near Birmingham, on Sunday.

Police announced the deaths of three other boys, aged eight, 10, and 11, on Monday.

West Midlands Police said: “Our deepest sympathies are with the families and friends of those involved in this tragedy.

“We cannot comprehend the enormity of the pain they must feel and our hearts go out to them.

“Specialist officers remain in contact with the family and we will issue further information as soon as we can.

“The searches have been completed and the scene of the incident at the lake will be lifted this evening.”

The death comes as England international Tyrone Mings visited a makeshift memorial at the lake.

Mings and fellow Aston Villa player and club captain John McGinn arrived on Wednesday to look at the carpet of floral tributes to the boys.

Mings, who plays at centre-back for the Birmingham-based club and has earned 17 caps for England, said: “It was a personal decision to pay our respects.

“We felt it was important to come down on a personal level just to show that support.

“Sometimes, as we’ve seen with other things that have happened across the city, there are things more important than football.

“We felt it was important to come down here, show our respects and show we were thinking about everything that has happened and the parents that are affected by it.

“We feel that pain too.”

Mings and McGinn spent a few moments in silence looking at the hundreds of tributes, cards, bouquets, children’s toys and balloons which have been laid at the foot of a tree next to Babbs Mill Park since tragedy unfolded in the nearby waters on Sunday.

Both players have been at the club’s mid-season training camp in Dubai before returning to the UK ahead of Thursday night’s home friendly against Spanish side Villarreal.

The tragedy has united the city’s rival football clubs, Aston Villa and Birmingham City, whose head coach John Eustace on Tuesday laid a wreath at the memorial on behalf of the Blues.

McGinn said: “We were in Dubai when we heard the news and I thought of my nieces and nephews, and the players thought about their kids.

“It was certainly moving for us.

“We saw John Eustace come down yesterday and myself and Tyrone thought it would be good for us to pay our respects.

“I’m sure tomorrow night in the friendly against Villareal, the Villa family will come together and pay our respects to what is a tragic event so close to home.”

“But it just shows what a close-knit community it is.”

Mings added: “It’s a really sad situation for everybody, we wanted to pay our respects.

“It’s touched everybody and made everybody really come together.

“We try and pay our respects as a football club, but this was kind of on a personal level.

“We were also thinking of everybody involved and it seemed a small gesture for us to come down and pay our respects.

“We felt it was important to do so.”

Later on Wednesday, staff from nearby John Henry Newman Catholic College and Kingshurst Primary School both spent a few minutes looking at the flowers and reading messages on cards including heartfelt tributes to the “Babbs Mill Boys”.

Earlier this week, relatives paid tribute to one of the youngsters, 10-year-old Jack Johnson, who is reported to have been trying to save others who fell into the water, and in a social media post, thanked members of the community for their support.

Several other tributes had cards dedicated to Jack while others paid tribute to another boy by name, saying: “To Thomas, The world will not be same without you” and “Thomas, rest in peace. Love from Earl”.

Among the dozens of teddy bears was one with the message: “RIP beautiful angels.”

More details have emerged about the rescuers, who included members of the public and police officers, including a new officer who suffered mild hypothermia after trying to punch through the ice in order to get the boys out as quickly as possible.

Rich Cooke, chairman of West Midlands Police Federation, told The Telegraph the officer was a student officer in his early 20s, who had been on one of his first operational rotations.

Mr Cooke described him as “an absolute hero” who was currently on days off but would be back on shift later this week.

He said all the police who arrived at the scene had “tried to help in whatever way they could”.