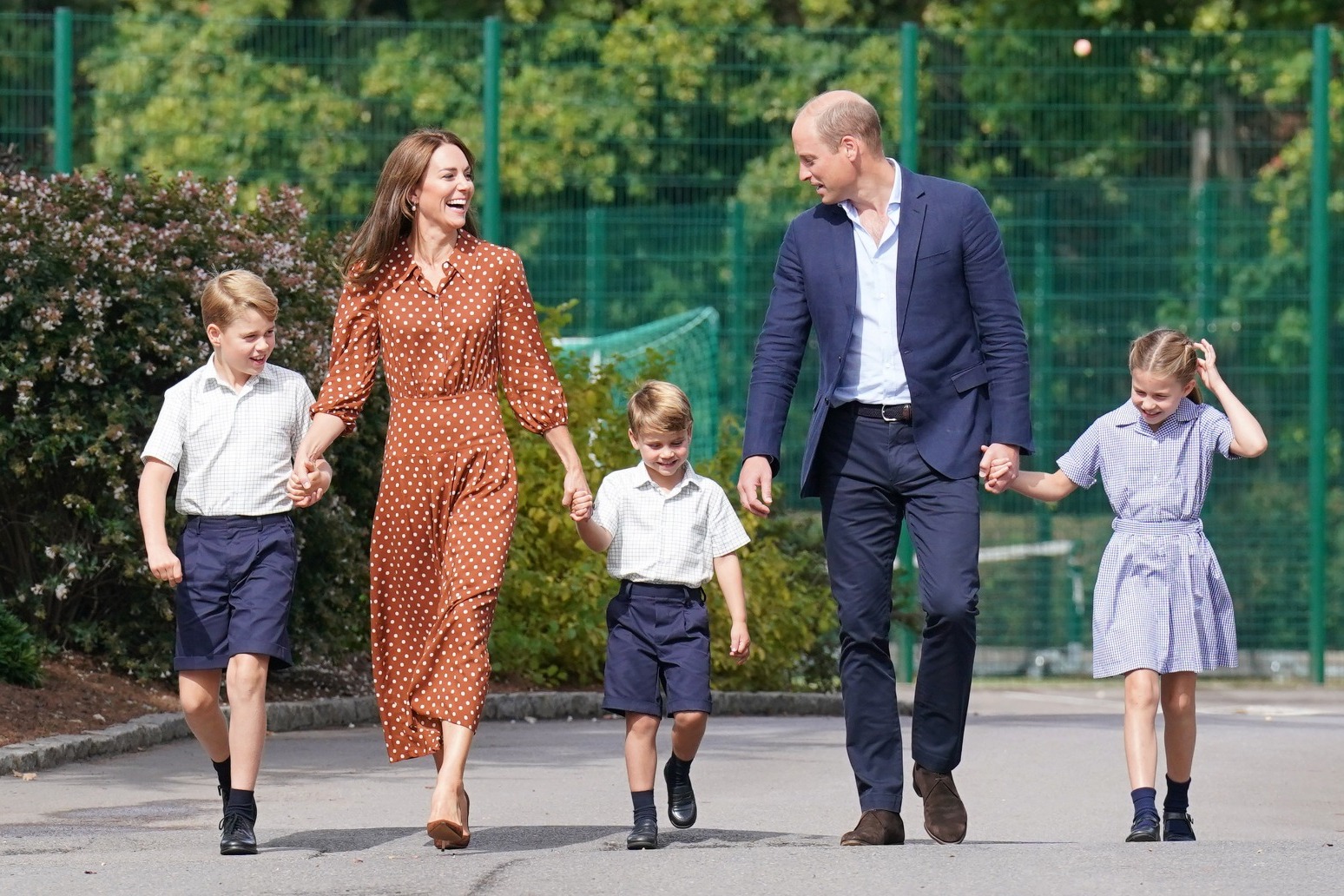 An “excited” Cambridge “gang” – Prince George, Princess Charlotte and Prince Louis – have settled into their new school, with the milestone captured in photographs on their first day.

Louis, four, is beginning full-time education and was joined by his nine-year-old brother and seven-year-old sister for his big moment at private Lambrook School near Ascot in Berkshire on Wednesday.

The Cambridge siblings looked confident and happy as they were accompanied by their parents the Duke and Duchess of Cambridge, ready for a 90-minute settling-in session for new pupils and their families.

William called his children “all the gang” as he ushered them up the steps of the large white 19th-century country mansion, and said the three of them were looking forward to starting.

The family strolled in a line, with Kate holding George and Louis’ hands and William holding Charlotte’s, to meet headmaster Jonathan Perry.

“Welcome to Lambrook,” Mr Perry told the children. “It’s lovely to have you with us. We’re very excited for the year ahead.”

Shaking them each by the hand in turn, he asked “Are you excited?” with all three chorusing “Yes”.

William remarked “We’re looking forward to it,” adding the children had “lots of questions”.

Mr Perry’s wife Jenny, who works in the pastoral team, was waiting in the doorway and greeted them with “Welcome back to Lambrook”, with William quipping “With all the gang”.

The youngsters were dressed in summer uniforms, with George and Louis in checked short-sleeved white shirts and navy shorts and Charlotte in a blue belted gingham dress.

A source said the Cambridge children were particularly excited to all be going to the same school for the first time.

“They’re really excited about starting a new school together, and I think mum and dad are too,” they said.

After parking, the family of five had managed the walk to the school during a gap in the rain, which later became torrential as other parents arrived.

Conscious of his youngest son’s very first day, William was seen stroking Louis’ hair reassuringly as they moved into sight of the entrance.

In June, high-spirited Louis stole the show during the Platinum Jubilee by letting out a howl and clapping his hands to his ears on the Buckingham Palace balcony, but he was on his best behaviour on Wednesday.

The duke and duchess could be heard talking to the children and laughing, in the final moments of preparation.

The children’s first full day is on Thursday, at the official start of term.

The Cambridges are said to have visited the exclusive prep school a number of times before choosing it, and greeted Mr and Mrs Perry warmly, with Kate remarking: “Nice to see you, Mr Perry.”

William and Kate went inside with the children for refreshments before George, Charlotte and Louis went to their new classroom to meet their teachers and other students.

There has already been a big change for the Cambridges in the past week, with the family beginning the next phase in their life by moving from Kensington Palace to their new four-bedroom home Adelaide Cottage in Windsor’s Home Park.

William and Kate made the switch in a bid to give their offspring a more normal life, with more freedom away from the goldfish bowl of the Palace in the heart of London.

Outdoorsy and nurturing prep school Lambrook, where fees are costing William and Kate more than £53,000 a year, has been described by parents as “magical”.

It boasts of giving its pupils “feathers to fly” and features 52 acres of grounds and state of the art buildings and resources.

The Good Schools Guide describes it as a “classic prep school” with a “heart of gold”, and says youngsters get to “run and run” in the vast grounds with “total freedom to explore, provided you’ve got your wellies on”.

The children will be day pupils, but Lambrook also offers weekly and occasional boarding.

William drove his family the 20-minute journey, no doubt relishing his first experience of the shorter school run after the daily trek from west to south London to George and Charlotte’s old school, Thomas’s Battersea.

Their arrival at Lambrook was captured for the history books by just three members of the media – one PA news agency photographer, one BBC cameraman and one reporter, forming the royal rota, supervised by one Kensington Palace press officer.

Those present were asked not to film on their mobile phones, to make sure the children were not faced with screens.

About half a dozen protection officers, dressed discreetly, kept carefully out of sight, with no other members of the media permitted to attend, in order to keep the afternoon calm and relaxed for the children.

The Duchess of Sussex claimed last week in an interview with The Cut that she would not be able to do the school run with her eldest child, Archie, in the UK, without a press pen of 40 people snapping pictures.

“Sorry, I have a problem with that. That doesn’t make me obsessed with privacy. That makes me a strong and good parent protecting my child,” said Meghan, who took The Cut journalist with her as she collected her son from pre-school.

The Editors’ Code of Practice, which sets out rules newspapers and magazines regulated by IPSO have agreed to follow, prevents the photographing of children at school.

Photographs of George and Charlotte’s first days at school in the past were captured by a similarly small rota, with the consent of the Cambridge family and the school, as was the case on Wednesday.

Gone are the days when William first arrived at Eton, of a three-tier scaffolding stage being erected for the scores of media outside.