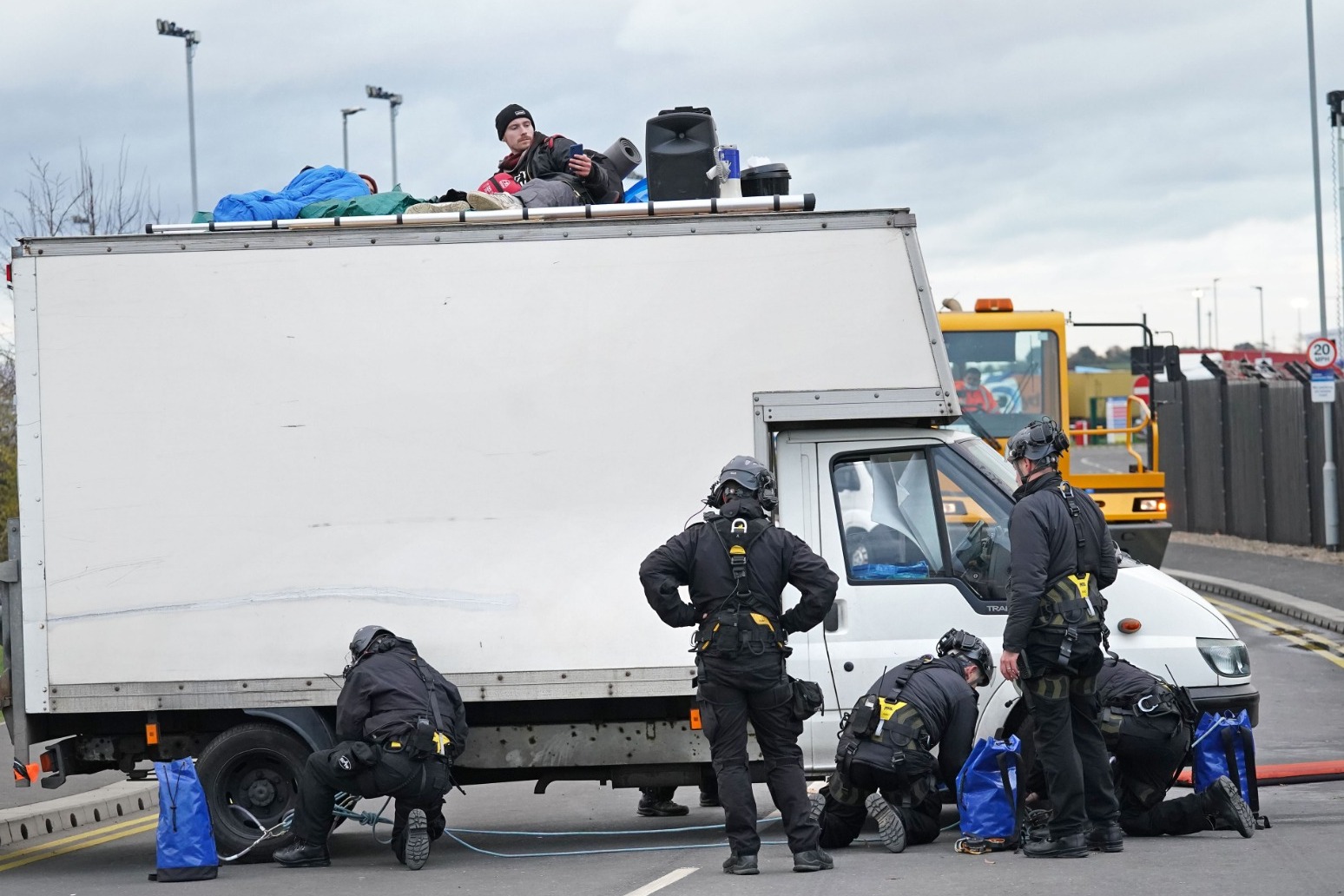 Police have arrested dozens of climate change protesters who caused blockades at Amazon warehouses across the country on Black Friday.

Activists arrived in the early hours of Friday to set up bamboo structures and “lock-ons”, and held banners urging Amazon to cut its emissions.

Some people could also be seen wearing masks of Amazon founder Jeff Bezos and setting up tents on the road as police officers began to move in.

At least 44 people have been arrested in five of the locations, police forces have confirmed.

The group, which is also drawing attention to alleged exploitation of Amazon workers, said it planned to remain at the scene for at least 48 hours.

An XR spokesperson said: “The action is intended to draw attention to Amazon’s exploitative and environmentally destructive business practices, disregard for workers’ rights in the name of company profits, as well as the wastefulness of Black Friday.

“The blockade is part of an international action by XR targeting 15 Amazon fulfilment centres in the UK, US, Germany and the Netherlands, aimed at highlighting Amazon’s ‘crimes’.

“This is happening in solidarity with activists and workers from the global Make Amazon Pay campaign, demanding better working conditions, clear environmental commitments and for Amazon to pay their fair share of tax.

“Amazon continues to lobby the US government to fight against climate legislation while telling the public they are committed to green initiatives.

“They are committing the very definition of greenwash.”

At the Dartford site, around 20 activists set up the blockade on a road at just before 5am.

Kent Police said: “Those present are situated in front of two entrances where some are locked on to concrete and wooden structures.

“Officers are in attendance and are working to end the protest whilst liaising with partner agencies, and the managers at the business, to minimise traffic disruption in the area.”

The force later arrested five people on suspicion of aggravated trespass before they were taken into custody.

The other attendees dispersed by 2.30pm.

Essex Police said 17 people were arrested on suspicion of aggravated trespass after a protest took place near to an Amazon depot in Tilbury.

Two men and two women were also arrested on suspicion of public nuisance at the site in Manchester.

Greater Manchester Police said: “The protest has since concluded and Sun Bank Lane has reopened.”

A further four were arrested by Durham Police following a demonstration outside the Amazon depot in Darlington.

XR’s spokesperson at the Dunfermline blockade, Meg Paton-Jones, said: “The police have one van on site and they are watching us.

“We started here at about 4am but are not blocking the employees’ car park so the night shift can leave.

“We have good vibes and music.”

Officers from West Midlands Police were at the scene of the Coventry blockade from 4am.

They later said 14 people were taken into custody on suspicion of offences relating to aggravated trespass.

A number of other forces including Avon and Somerset, Staffordshire and Police Scotland said officers had been “engaging” with protesters.

Amazon said it is working to minimise any potential disruption to customers.

A spokesman said: “At Amazon, we take our responsibilities very seriously.

“That includes our commitment to be net-zero carbon by 2040 – 10 years ahead of the Paris Agreement – providing excellent pay and benefits in a safe and modern work environment, and supporting the tens of thousands of British small businesses who sell on our store.

“We know there is always more to do, and we’ll continue to invent and invest on behalf of our employees, customers, small businesses and communities in the UK.