Drought persists in south of UK while thunderstorms hit the north 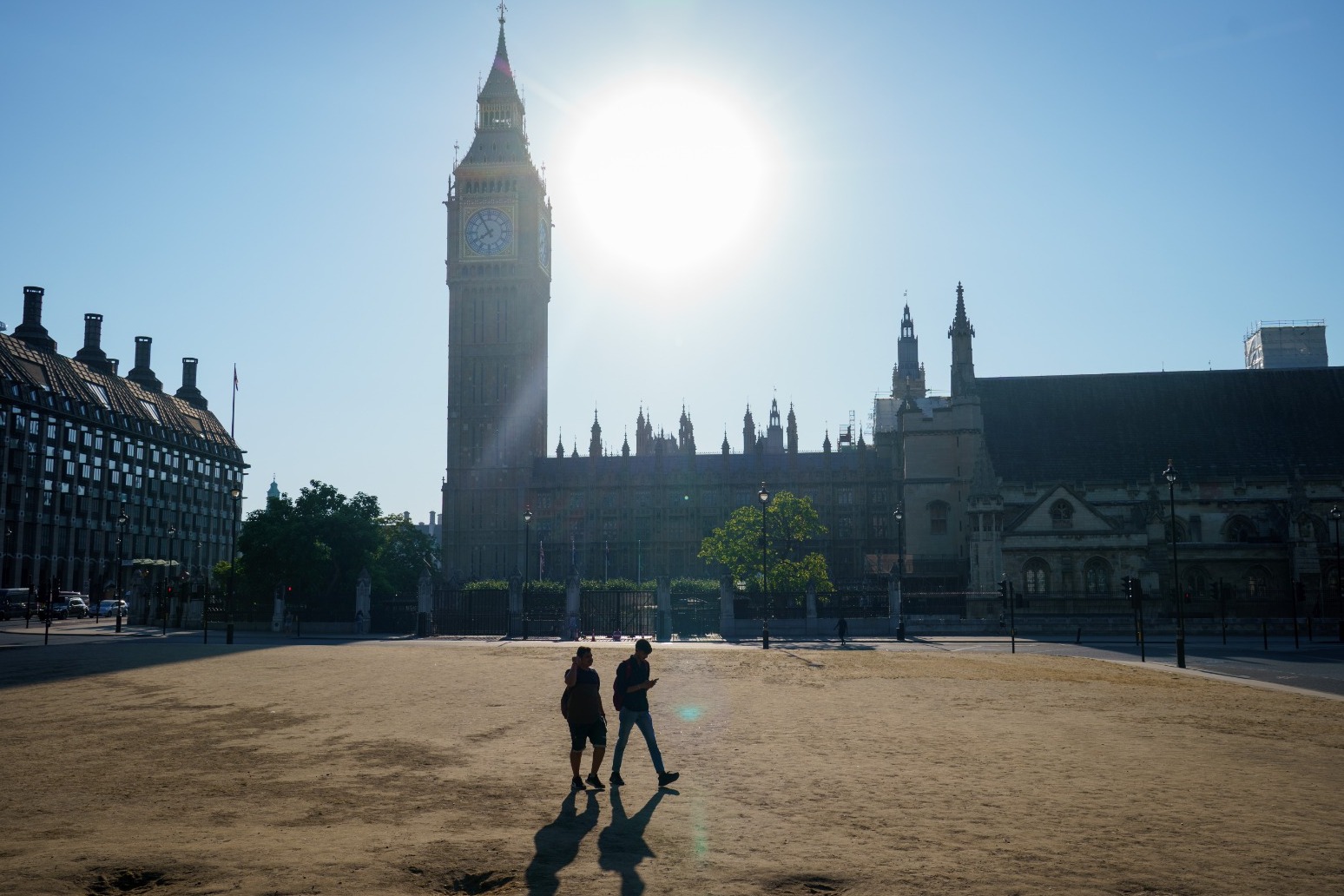 More extreme heat and drought conditions are expected in the southern half of the UK this weekend, while the northern half is set to be struck by thunderstorms and floods.

The Met Office has issued an amber heat warning covering most of England and Wales, where temperatures of up to 34C are predicted for Saturday and Sunday.

This means heat-related illnesses including sunburn and heat exhaustion are “likely” among the general population, and delays to public transport are “possible”.

Meanwhile, a lower-level yellow warning for thunderstorms is in place from noon on Sunday until 6am on Monday for most of Scotland and Northern Ireland.

This warning means there is a “small chance” of flooding in these nations and the potential for power cuts.

The highest predicted daytime temperature of 34C is forecast in the south-east on Saturday, with 32C predicted in London and 27C in Edinburgh.

Temperatures around the 30C mark are expected further north in England, while much of Scotland and Northern Ireland can expect temperatures in the mid-twenties.

This comes after an official drought was declared in eight areas of England on Friday by the National Drought Group (NDG), which comprises representatives from the Government, water companies, the Environment Agency (EA) and others.

Fire crews in Derbyshire were still tackling a huge blaze at 9pm on Friday night, with four fire engines at the scene in Creswell, Worksop.

Footage shared online showed flames filling the horizon and large plumes of smoke in the sky above a residential area.

Derbyshire Fire and Rescue Service also fought embankment blazes beside a railway in Matlock, and near Junction 26 of the M1.

The service said it was “planning for a busy weekend” of further fires, and echoing the pleas of fire services across the nation, asked people to refrain from starting garden bonfires or using portable barbecues.

Some 35 firefighters were also deployed to tackle a two-hectare blaze at the Leyton Flats wildlife reserve in Waltham Forest, east London.

London Fire Brigade (LFB) crews were captured beating back the flames at the scene.

The service said there were no ongoing fires in the capital at 9pm on Friday.

In Dorset, firefighters batted through the night to bring a large blaze at Studland under control.

Ninety firefighters were deployed when the fire was first reported at about 1pm on Friday, and 10 fire engines were deployed from neighbouring areas, Dorset and Wiltshire Fire and Rescue Service (DWFRS) said.

A spokeswoman for the force told the PA News agency a disposable barbecue was the most likely cause.

“We found evidence of a little camp where someone had used a disposable barbecue, we can’t say 100% that was the cause but when we find evidence we have to assume that’s the most likely cause – fires don’t just start on their own,” she said.

Between August 1 and 10 DWFRS attend 180 wildfires compared to just 34 over the same period last year – an increase of 429%.

The spokeswoman said operational staff “have never had a year like this one, it is just unprecedented.”

England’s drought could persist into the next year, according to the EA.

John Curtin, executive director for local operations at the EA, said that after the driest summer in 50 years, it would take “weeks’ worth of rain” to replenish water sources.

The announcement could lead to more measures such as hosepipe bans, however, the EA has reassured the public that essential water supplies are safe.

Eight of 14 areas designated by the EA have now moved to “drought”, the second stage, including Devon and Cornwall, Solent and South Downs, Kent and South London, Herts and North London, East Anglia, Thames, Lincolnshire and Northamptonshire, and East Midlands.

Three water companies – Welsh Water, Southern Water, and South East Water – have all imposed hosepipe bans, while Yorkshire Water has announced a ban will start on August 26 and Thames Water is planning one in the coming weeks.