DUP confirms it will not nominate ministers to resurrect Stormont 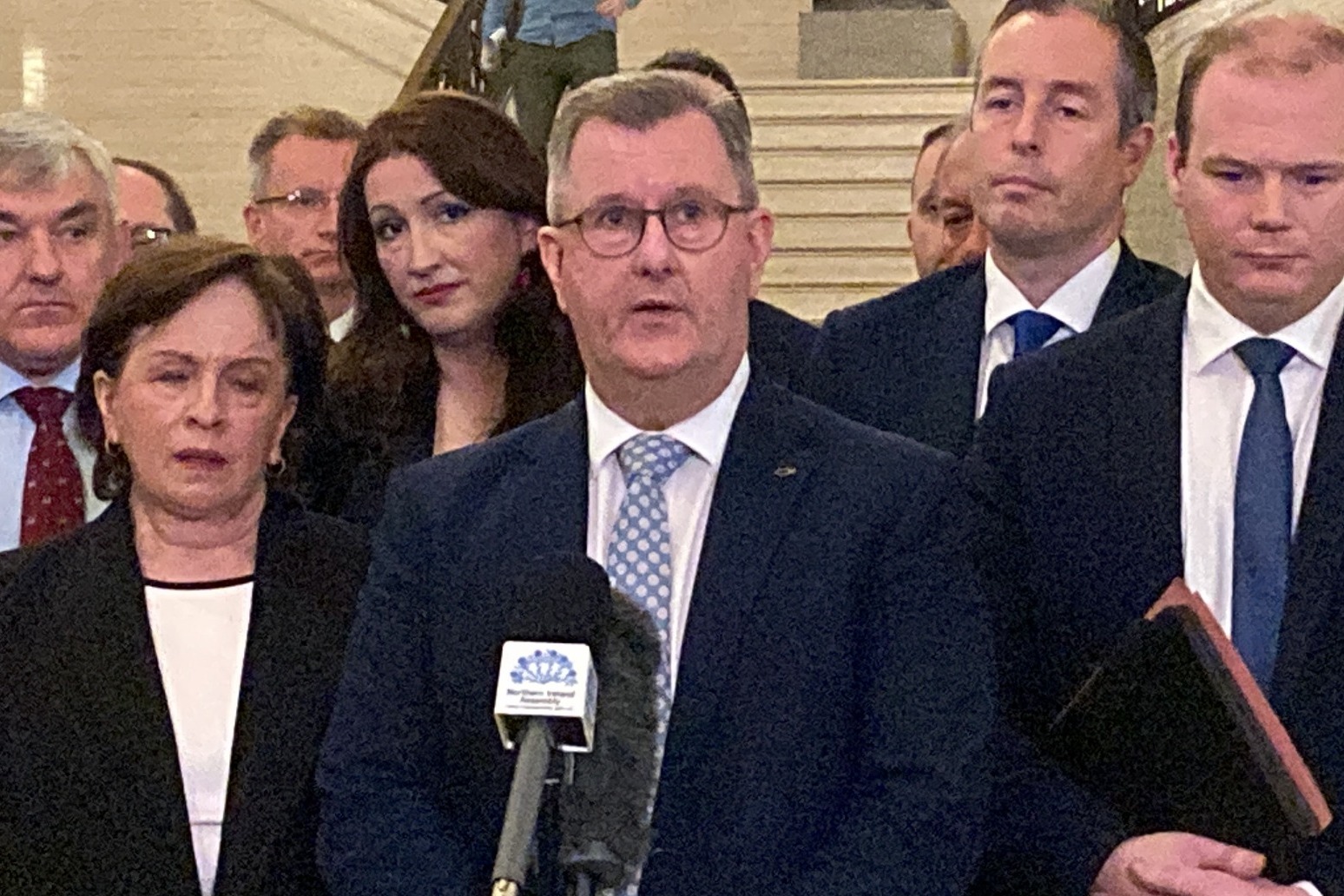 The DUP has confirmed it will not nominate ministers to the Stormont Executive.

MLAs have returned to Stormont in a last-gasp bid to restore the executive before fresh Assembly elections are called.

The election of a new speaker is a prerequisite before an executive can be appointed.

MLAs will later vote on the nominations following speeches.

Prime Minister Rishi Sunak earlier urged the DUP to get back to Stormont.

His official spokesman said: “There’s still time for the DUP and executives to get back to Stormont and we urge them to do so because the people of Northern Ireland deserve a fully functioning and locally elected executive which can respond to the issues facing the communities there.

However, DUP leader Sir Jeffrey Donaldson said his party will not nominate ministers because not enough progress has been made on addressing issues of concern around the Northern Ireland Protocol.

“We were given a clear mandate in the Assembly elections, and we would not nominate ministers to an executive until decisive action is taken on the protocol to remove the barriers to trade within our own country and to restore our place within the United Kingdom internal market,” he said.

“That remains our position and so today we will not be supporting the nomination of ministers to the executive.”

He also warned that unionists will not accept a joint authority arrangement between the British and Irish governments instead of direct rule from London in the absence of the Stormont Assembly.

“Unionists will not accept joint authority. Joint authority would be an abandonment of the Good Friday Agreement and if that’s what the Irish government want to do, then let them be honest and say,” he said.

Speaking in the chamber, Sinn Fein Stormont leader Michelle O’Neill said the DUP “have left us all at the mercy of a heartless and dysfunctional Tory government”.

Ms O’Neill claimed those watching today’s proceedings in the Northern Ireland Assembly will be “bewildered”.

“Most of us here want to do the job we were elected to do,” she said.

“Today our caretaker ministers rally to take decisions, within tight limits, before their civil servants are left in an impossible position come midnight where they are expected to run our essential public services yet have no budget and no powers.”

DUP MLA Paul Givan described today’s recall of the assembly as a “flawed and failed attempt of forming an executive”.

He contended the unionist mandate has been “disrespected”, and said powersharing has to be “about consent”, “not contempt”.

“The DUP supports devolution. We are ready to appoint ministers today. The barrier to devolution is not the DUP. It is the Northern Ireland Protocol,” he told MLAs.

Alliance leader Naomi Long said the people of Northern Ireland are suffering without devolved government, describing public services as “on their knees” or “teetering on the brink”.

Ulster Unionist Party leader Doug Beattie described anger in the Assembly chamber, but said it is “nothing compared to the anger in the towns and villages across Northern Ireland”.

He thanked his party colleague Robin Swann for his service as health minister.

SDLP MLA Matthew O’Toole told MLAs he was “ashamed of this place”.

“While this Assembly sat mothballed and silent people’s homes have got colder, their trust in politics has fallen even further and their lives have got harder,” he said.

He also said that another election would be a “farce”.

Earlier Irish deputy premier Leo Varadkar has said it is “regrettable” that people in Northern Ireland could be facing another election.

“I don’t know for sure what decision will be made by the Secretary of State,” Mr Varadkar said.

“It is anticipated though that there will be fresh elections in Northern Ireland, it’s impossible to predict the outcome of an election.

“As things look today, the results will be much the same as it was in the last election, with no clear majority for unionist combined or nationalist combined. Probably Sinn Fein will have the largest party again.

“I think there will be a clear majority of MLAs, who don’t want the protocol scrapped, re-elected and that has to be taken into account.

“But you can never predict for sure what’s going to happen in any election. But I do regret that is happening. It is happening because one party has decided not to participate, and that’s the DUP.

“I think that’s very much regrettable. If that happens, we’ll deal with the situation as it develops.”

He added: “I would like to hear the voice of the DUP in Northern Ireland government but that’s not possible at the moment.”

The special sitting comes just hours ahead of a deadline for calling another election.

A six-month legislative timeframe to form an administration expires just after midnight early on Friday.

If no ministerial executive is in place by then, the UK Government assumes a legal responsibility to call another election.

Northern Ireland Secretary Chris Heaton-Harris has repeatedly warned that he will call a Stormont poll if Friday’s deadline passes without a devolved executive being formed.

He said: “Since I have become Secretary of State, I have consistently been clear that if the executive is not formed by October 28, I will call an election.

“Time is running out, and people in Northern Ireland deserve locally elected decision-makers and an executive who can respond to the issues facing people, families and communities across Northern Ireland during this challenging time.

“We are clear that people deserve an accountable devolved government and that was my message to party leaders.”

The party’s boycott is part of a campaign of opposition to Brexit’s Northern Ireland Protocol and the DUP says it will not return to powersharing until decisive action is taken to remove the protocol’s economic barriers on trade between Great Britain and Northern Ireland.

During the Stormont recall, MLAs are set to debate a motion, tabled by Sinn Fein in consultation with the Alliance Party, that will focus on the cost-of-living crisis, the instability at Westminster and the absence of devolved government at Stormont.

The first failed attempt to elect a new speaker came in May following the election.

The Assembly has been recalled on two further occasions since, most recently in August.

While Northern Ireland has no first or deputy first ministers, other ministers who served in the previous mandate have remained in post following May’s election, albeit they have been significantly constrained in the decisions they can take.

If Friday’s deadline passes without a full executive having been established, those remaining ministers will cease to hold office.