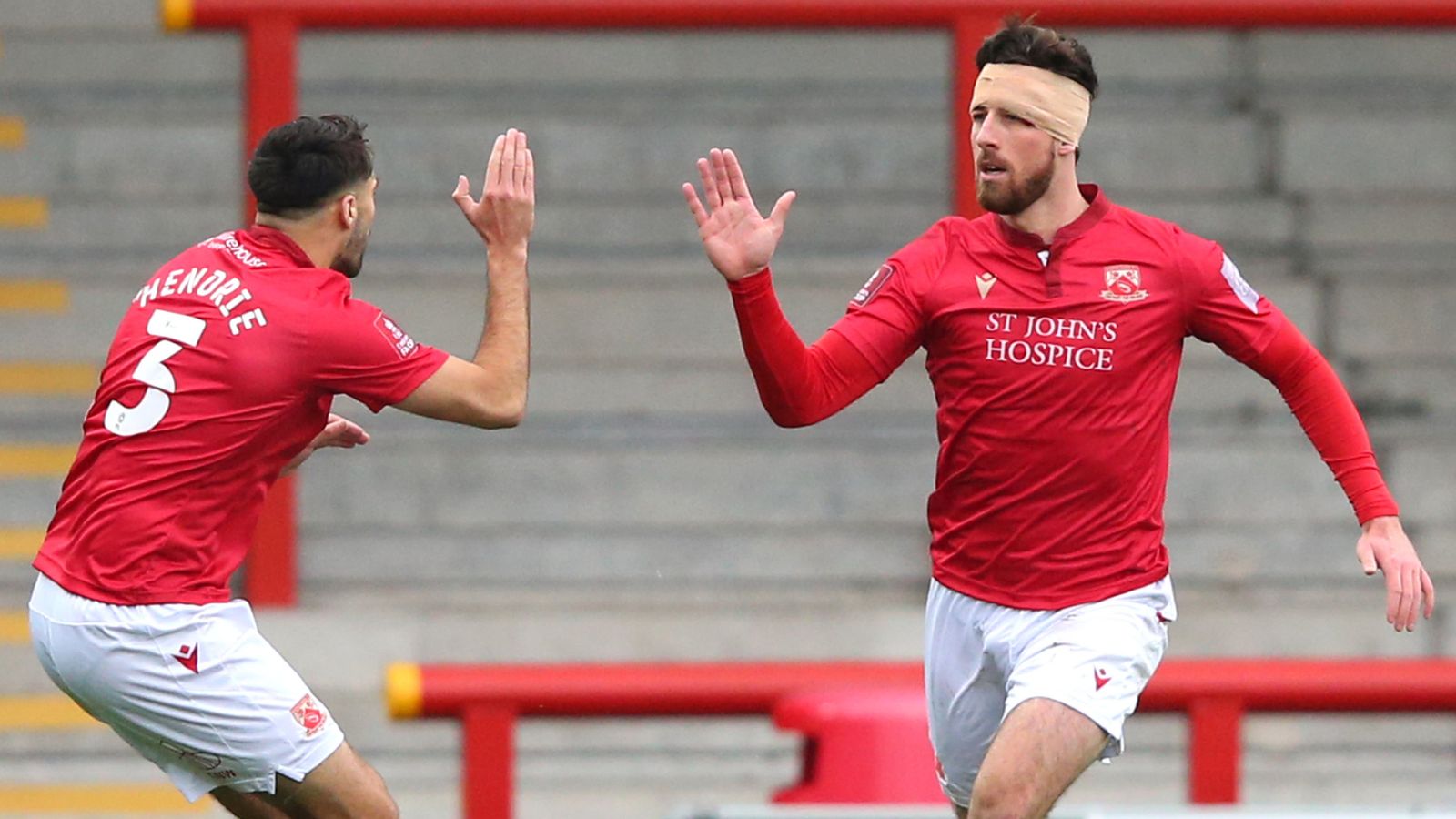 Solihull threatened to spring another FA Cup shock but Morecambe ended the Vanarama National League side’s interest in this season’s competition by battling back to win 4-2 after extra-time at the Mazuma Stadium.

The visitors went ahead through Kyle Hudlin’s effort and had two efforts cleared off the line by Yann Songo’o in the first half before Cole Stockton’s quickfire brace gave the Shrimps the lead just before the hour mark.

Former Morecambe full-back Jordan Cranston equalised as the tie went to an additional half-hour but Solihull’s resistance was ended by substitute John O’Sullivan’s header and an unfortunate own goal by Mitch Hancox.

The Moors, who had beaten Scunthorpe in the last round, had played their part in an engrossing tie but it was Sky Bet League Two Morecambe who progressed to the third round for the first time in 18 years.

Non-league King’s Lynn had overcome Port Vale last time out but were soundly beaten at Portsmouth, who never looked back after going ahead within two minutes and romped to a 6-1 victory at Fratton Park.

Rasmus Nicolaisen, Tom Naylor, Sean Raggett and Marcus Harness put Portsmouth four up before Dayle Southwell pulled one back to give King’s Lynn something to show for their efforts.

It was a fleeting moment of joy for the visitors as Ellis Harrison then struck from the spot for the 2007-08 winners while Jordy Hiwula became Pompey’s sixth different scorer late on.

Finn Azaz put Cheltenham ahead after just two minutes and although Chris Porter struck just after the hour it was the Robins who had the last laugh in extra-time thanks to Lloyd’s header.

Salford‘s aim of reaching the third round for the first time in their history was dashed following a horror show second half at Newport, who cruised to a 3-0 triumph at Rodney Parade.

Harrogate had an identical aim to Salford but their hopes of a historic afternoon ended in frustratingly-similar fashion as the Yorkshire side conceded four times in the second half against Blackpool and finished with 10 men.

After a goalless first half, Mark Beck put into his own net before Grant Ward, Jordan Lawrence-Gabriel and Daniel Kemp struck to give the Tangerines a 4-0 win. Harrogate’s day was compounded by Kevin Lokko’s dismissal late on.

League Two Exeter sprung a surprise by claiming a 3-2 success at third-tier Gillingham, who took the lead through Vadaine Oliver before Nicky Law’s leveller and two goals from Joel Randall put the Grecians in charge. Dominic Samuel pulled one back but Exeter held on.

Oldham came from behind to win 2-1 at League Two rivals Bradford, who took the lead through Clayton Donaldson’s penalty before superb strikes from distance from both Conor McAleny and Danny Rowe turned the match on its head.