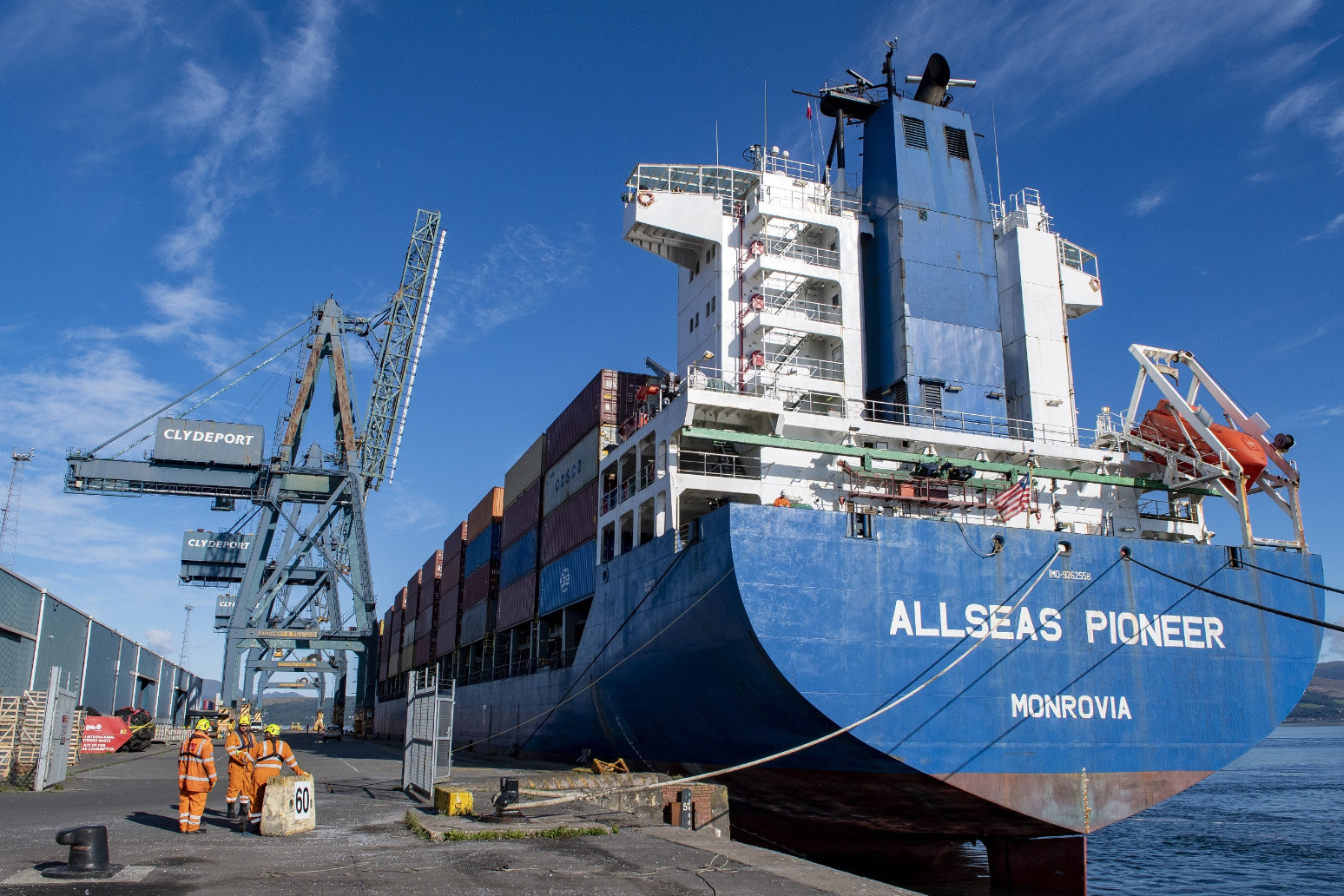 More than a million bottles of Scotch whisky will be shipped to China after a giant ship arrived in Scotland as part of the first direct container service between the two countries.

The Allseas Pioneer arrived in Greenock on Saturday from Ningbo in China, laden with items including textiles, furniture and toys for sale in Scotland.

It comes after bosses at KC Shipping established a direct link between the two countries, a move hailed as a “game changer for Scotland”.

Three sailings in each direction are due to take place each month, calling at Ningbo and the Chinese city of Shenzhen before arriving in Greenock via Liverpool.

Jim McSporran of Peel Ports, which operates the Clydeport in Greenock, said it was “great to finally welcome this vital service”.

He said: “We believe this partnership will prove to be a hugely positive development for businesses and customers, as well as boosting the wider supply chain, and we look forward to continuing to work with our partners on this service in the coming months.”

David Milne, KC Group Shipping managing director, said the company has been “amazed at the level of immediate interest” in the route.

He said: “It’s been a phenomenal success for KC Group Shipping, but this is just the first of many journeys and we need the support of Scottish importers and exporters to safeguard the long-term future of this new service.<

“Our direct trading link to China cuts through frustrating transhipment delays, which is a massive boost for Scottish businesses and can only help consumers in these difficult times.

“We’ll be toasting the success of over one million bottles of Scotch whisky being traded from the first vessel alone, and we’ll raise a glass to all the other businesses which will also benefit.

“I described this as a game changer for Scotland, and the uptake in the service is certainly proving that case, for Scotland’s furniture, pharmaceuticals, packaging and spirits sectors.”

Councillor Stephen McCabe, leader of Inverclyde Council, added: “The freight side of Greenock Ocean Terminal can often be overshadowed and sometimes forgotten about because of the busy cruise ship schedule.

“But the container shipping side of the terminal has also grown substantially in recent years, and the new Glasgow City Region cruise ship visitor centre development, including the dedicated cruise ship pontoon, has created more capacity for both container and passenger vessels to aid the continued growth of both markets and further boost the economy locally, regionally and nationally.

“The decision by KC Shipping to establish this direct link from Greenock to China – the first in Scotland – combined with the visitor centre development and ambitious Clyde Green Freeport bid is a ringing endorsement of Greenock and Inverclyde as an important location for exports, imports and visitors and long may that continue.”