Former Pope Benedict XVI dies at the age of 95 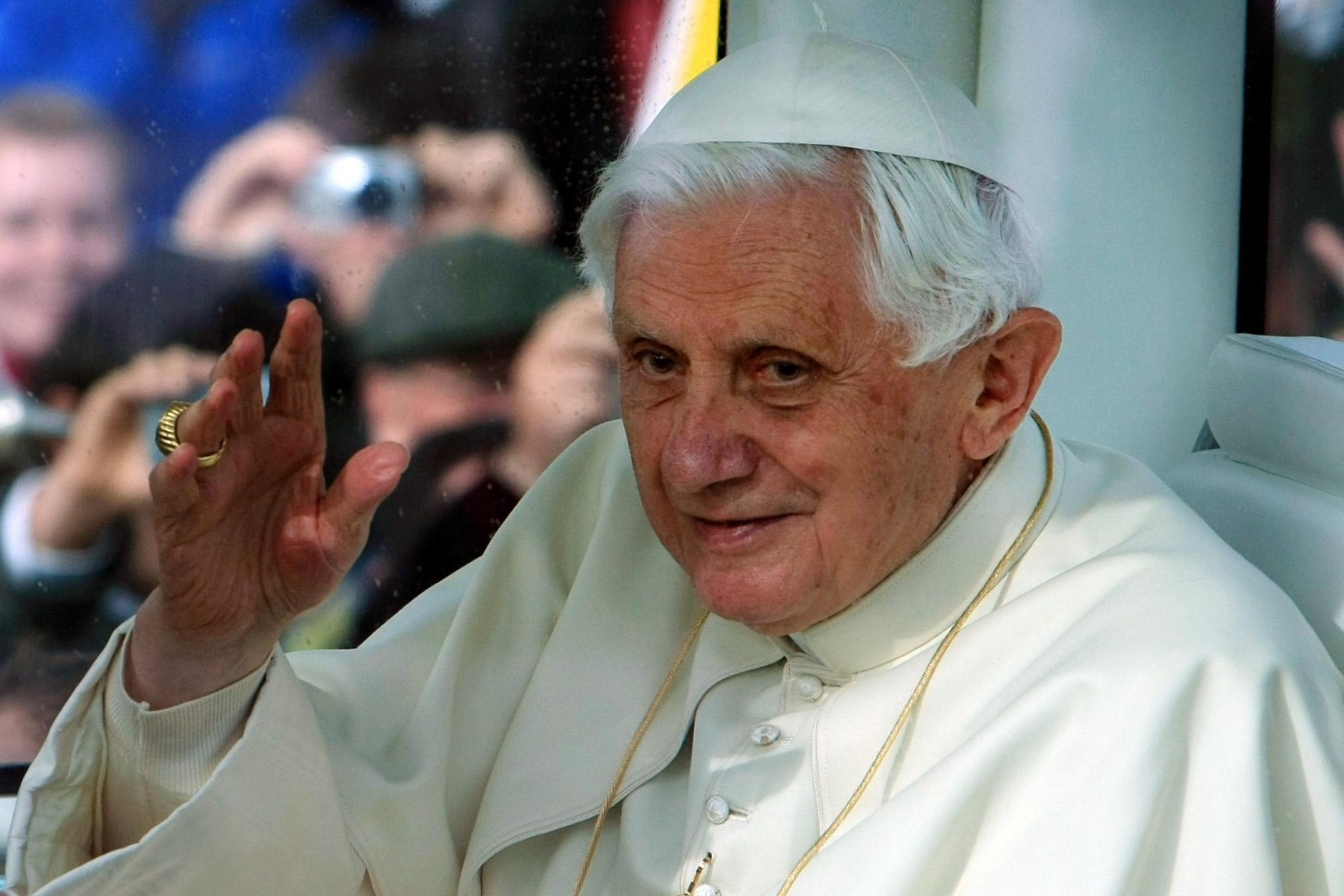 The Vatican says Pope Emeritus Benedict XVI, the German theologian who will be remembered as the first pope in 600 years to resign, has died at the age of 95.

“With pain I inform that Pope Emeritus Benedict XVI died today at 9:34 in the Mater Ecclesia Monastery in the Vatican.

“Further information will be released as soon as possible.”

Cardinal Vincent Nichols, the head of the Roman Catholic Church in England and Wales, said Benedict was “one of the great theologians of the 20th century”.

In a statement, he said: “I am deeply saddened to learn of the death of Pope Benedict. He will be remembered as one of the great theologians of the 20th century.

“I remember with particular affection the remarkable Papal Visit to these lands in 2010. We saw his courtesy, his gentleness, the perceptiveness of his mind and the openness of his welcome to everybody that he met.”

“Pope Benedict is very much in my heart and in my prayers. I give thanks to God for his ministry and leadership.”

Benedict stunned the world on February 11 2013 when he announced that he no longer had the strength to run the 1.2 billion-strong Catholic Church that he had steered for eight years through scandal and indifference.

His dramatic decision paved the way for the conclave that elected Pope Francis as his successor.

The two popes then lived side-by-side in the Vatican gardens, an unprecedented arrangement that set the stage for future “popes emeritus” to do the same.

The former Cardinal Joseph Ratzinger had never wanted to be pope, planning at age 78 to spend his final years writing in the “peace and quiet” of his native Bavaria.

Instead, he was forced to follow the footsteps of the beloved St John Paul II and run the church through the fallout of the clerical sex abuse scandal and then a second scandal that erupted when his own butler stole his personal papers and gave them to a journalist.

Being elected pope, he once said, felt like a “guillotine” had come down on him.

Nevertheless, he set about the job with a single-minded vision to rekindle the faith in a world that, he frequently lamented, seemed to think it could do without God.

“In vast areas of the world today, there is a strange forgetfulness of God,” he told one million young people gathered on a vast field for his first foreign trip as pope, to World Youth Day in Cologne, Germany, in 2005. “It seems as if everything would be just the same even without him.”

With some decisive, often controversial moves, he tried to remind Europe of its Christian heritage. And he set the Catholic Church on a conservative, tradition-minded path that often alienated progressives.

He relaxed the restrictions on celebrating the old Latin Mass and launched a crackdown on American nuns, insisting that the church stay true to its doctrine and traditions in the face of a changing world. It was a path that in many ways was reversed by his successor, Francis, whose mercy-over-morals priorities alienated the traditionalists who had been so indulged by Benedict.

Benedict’s style could not have been more different from that of John Paul or Francis.

No globe-trotting media darling or populist, Benedict was a teacher, theologian and academic to the core: quiet and pensive with a fierce mind. He spoke in paragraphs, not soundbites. He had a weakness for orange Fanta as well as his beloved library; when he was elected pope, he had his entire study moved — as is — from his apartment just outside the Vatican walls into the Apostolic Palace. The books followed him to his retirement home.

“In them are all my advisers,” he said of his books in the 2010 book-length interview “Light of the World.” “I know every nook and cranny, and everything has its history.”

It was Benedict’s devotion to history and tradition that endeared him to members of the traditionalist wing of the Catholic Church. For them, Benedict remained even in retirement a beacon of nostalgia for the orthodoxy and Latin Mass of their youth — and the pope they much preferred over Francis.

In time, this group of arch-conservatives, whose complaints were amplified by sympathetic U.S.-based conservative Catholic media, would become a key source of opposition to Francis who responded to what he said were threats of division by reimposing the restrictions on the old Latin Mass that Benedict had loosened.

Like his predecessor John Paul, Benedict made reaching out to Jews a hallmark of his papacy. His first official act as pope was a letter to Rome’s Jewish community and he became the second pope in history, after John Paul, to enter a synagogue.

In his 2011 book, “Jesus of Nazareth,” Benedict made a sweeping exoneration of the Jewish people for the death of Christ, explaining biblically and theologically why there was no basis in Scripture for the argument that the Jewish people as a whole were responsible for Jesus’ death.

“It’s very clear Benedict is a true friend of the Jewish people,” said Rabbi David Rosen, who heads the interreligious relations office for the American Jewish Committee, at the time of Benedict’s retirement.

Yet Benedict also offended some Jews who were incensed at his constant defense of and promotion toward sainthood of Pope Pius XII, the World War II-era pope accused by some of having failed to sufficiently denounce the Holocaust. And they harshly criticized Benedict when he removed the excommunication of a traditionalist British bishop who had denied the Holocaust.

Benedict’s relations with the Muslim world were also a mixed bag. He riled Muslims with a speech in September 2006 — five years after the Sept. 11 attacks in the United States — in which he quoted a Byzantine emperor who characterized some of the teachings of the Prophet Muhammad as “evil and inhuman,” particularly his command to spread the faith “by the sword.”

A subsequent comment after the massacre of Christians in Egypt led the Al Azhar center in Cairo, the seat of Sunni Muslim learning, to suspend ties with the Vatican, which were only restored under Francis.

The Vatican under Benedict suffered notorious PR gaffes, and sometimes Benedict himself was to blame. He enraged the United Nations and several European governments in 2009 when, en route to Africa, he told reporters that the AIDS problem couldn’t be resolved by distributing condoms.

“On the contrary, it increases the problem,” Benedict said. A year later, he issued a revision saying that if a male prostitute were to use a condom to avoid passing HIV to his partner, he might be taking a first step toward a more responsible sexuality.

But Benedict’s legacy was irreversibly colored by the global eruption in 2010 of the sex abuse scandal, even though as a cardinal he was responsible for turning the Vatican around on the issue.

Documents revealed that the Vatican knew very well of the problem yet turned a blind eye for decades, at times rebuffing bishops who tried to do the right thing.

Benedict had firsthand knowledge of the scope of the problem, since his old office — the Congregation for the Doctrine of the Faith, which he had headed since 1982 — was responsible for dealing with abuse cases.

In fact, it was he who, before becoming pope, took the then-revolutionary decision in 2001 to assume responsibility for processing those cases after he realized bishops around the world weren’t punishing abusers but were just moving them from parish to parish where they could rape again.

And once he became pope, Benedict essentially reversed his beloved predecessor, John Paul, by taking action against the 20th century’s most notorious pedophile priest, the Rev. Marcial Maciel. Benedict took over Maciel’s Legionaries of Christ, a conservative religious order held up as a model of orthodoxy by John Paul, after it was revealed that Maciel sexually abused seminarians and fathered at least three children.

In retirement, Benedict was faulted by an independent report for his handling of four priests while he was bishop of Munich; he denied any personal wrongdoing but apologized for any “grievous faults.”

As soon as the abuse scandal calmed down for Benedict, another one erupted.

In October 2012, Benedict’s former butler, Paolo Gabriele, was convicted of aggravated theft after Vatican police found a huge stash of papal documents in his apartment. Gabriele told Vatican investigators he gave the documents to Italian journalist Gianluigi Nuzzi because he thought the pope wasn’t being informed of the “evil and corruption” in the Vatican and that exposing it publicly would put the church on the right track.

Once the “Vatileaks” scandal was resolved, including with a papal pardon of Gabriele, Benedict felt free to take the extraordinary decision that he had hinted at previously: He announced that he would resign rather than die in office as all his predecessors had done for almost six centuries.

“After having repeatedly examined my conscience before God, I have come to the certainty that my strengths due to an advanced age are no longer suited” to the demands of being the pope, he told cardinals.

He made his last public appearances in February 2013 and then boarded a helicopter to the papal summer retreat at Castel Gandolfo, to sit out the conclave in private. Benedict then largely kept to his word that he would live a life of prayer in retirement, emerging only occasionally from his converted monastery for special events and writing occasional book prefaces and messages.

Usually they were innocuous, but one 2020 book — in which Benedict defended the celibate priesthood at a time when Francis was considering an exception — sparked demands for future “popes emeritus” to keep quiet.

Despite his very different style and priorities, Francis frequently said that having Benedict in the Vatican was like having a “wise grandfather” living at home.

Benedict was often misunderstood: Nicknamed “God’s Rottweiler” by the unsympathetic media, he was actually a very sweet and fiercely smart academic who devoted his life to serving the church he loved.

“Thank you for having given us the luminous example of the simple and humble worker in the vineyard of the Lord,” Benedict’s longtime deputy, Cardinal Tarcisio Bertone, told him in one of his final public events as pope.

Benedict inherited the seemingly impossible task of following in the footsteps of John Paul when he was elected the 265th leader of the Church on April 19, 2005. He was the oldest pope elected in 275 years and the first German in nearly 1,000 years.

Born April 16, 1927, in Marktl Am Inn, in Bavaria, Benedict wrote in his memoirs of being enlisted in the Nazi youth movement against his will in 1941, when he was 14 and membership was compulsory. He deserted the German army in April 1945, the waning days of the war.

Benedict was ordained, along with his brother, Georg, in 1951. After spending several years teaching theology in Germany, he was appointed bishop of Munich in 1977 and elevated to cardinal three months later by Pope Paul VI.

His brother Georg was a frequent visitor to the papal summer residence at Castel Gandolfo until he died in 2020. His sister died years previously. His “papal family” consisted of Monsignor Georg Gaenswein, his longtime private secretary who was always by his side, another secretary and consecrated women who tended to the papal apartment.