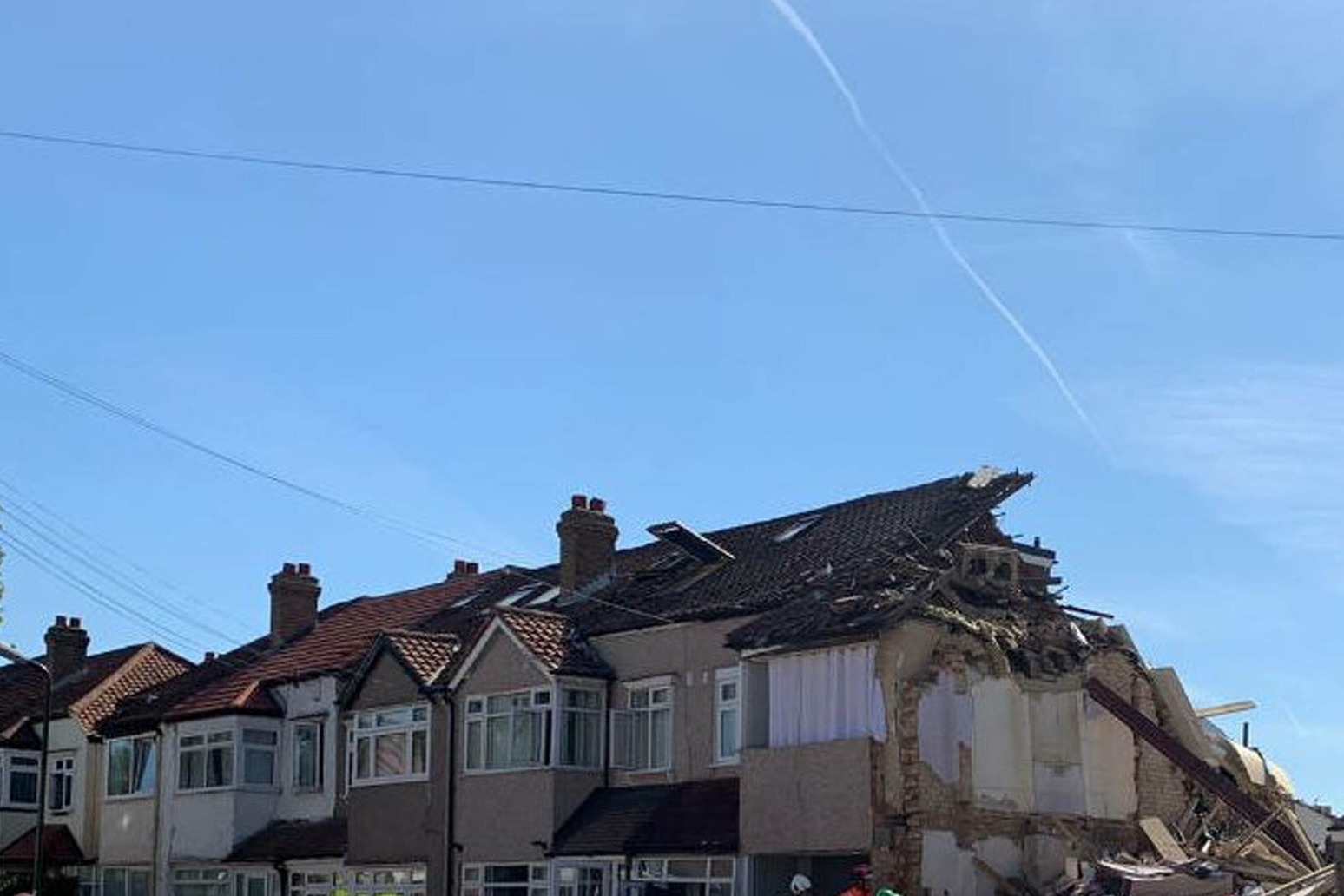 A four-year-old girl is feared missing after a terraced home collapsed following an explosion, according to neighbours.

Residents hailed the efforts of two “heroic” men who rescued three children from the destroyed house in Thornton Heath, south London, but fear a girl is still missing in the rubble.

Richard Welch, London Fire Brigade deputy assistant commissioner, has confirmed a search is under way to find a missing person.

A member of Merton Council at the scene also told the PA news agency he believed a four-year-old girl was still inside.

Several residents also raised concerns for a woman living in the house next door, which was damaged by the blast, after her husband was seen searching for her.

London Fire Brigade (LFB) said their crews treated four patients at the scene on Galpin’s Road on Thornton Heath, and one was discharged while the other three were taken to hospital.

Dozens of residents gathered beside a police cordon on the end of the street hours later said they believed a woman and four children had lived in the collapsed house.

Many also said they reported a strong gas smell in the area which had persisted for around two weeks.

Residents said gas engineers had been working on the street but had not been seen for a few days.

Galpin’s Road residents Delroy Simms, 62, and Kutoya Kukanda, 50, have been called “heroes” after they rescued three children from the house moments after the blast.

Mr Simms, dressed in his pyjamas by the cordon, told PA: “I was getting ready to go to work when I heard the explosion.

“I already knew what it was because that gas was smelling all week, really strong. It was giving me a headache yesterday.

“My neighbour has been calling them (gas engineers) all week.”

“When I heard the explosion it was like an earthquake,” he said.

“It shook me up, and my house. The shutters on our windows blew off their hinges.

“I went to the window and saw the devastation.”

Mr Simms said that Mr Kukanda passed children out to him as bricks were still falling from the structure.

Mr Kukanda, who had a bruise on his shin from a falling brick, told PA: “I heard boom, then I opened the door.

“I saw smoke, the house had collapsed, and people were screaming inside.

“I went inside and took the first baby – there were three children.

“I took one of the children, gave it to him (Mr Simms).

“The mother was screaming and saying: ‘One of my daughters is still inside’.

Mr Simms added that the house next door was also damaged, and he saw a man he presumed to be the occupant standing on top of “around eight feet of rubble, digging with his hands” as he searched for his partner.

Mr Simms said: “I went and got him a pair of shoes.

“He said: ‘My wife is still in there.’ Everything was chaotic.

“He was trying to dig his way down but then the fire brigade came and told him to come down because it might blow again.

“They told us to get back.”

Mr Simms’ wife, Elene, said: “We want to know why the gas board aren’t here. It’s been more than two weeks.”

Their son, Tristan Simms, had been visiting his parents’ home for his 31st birthday celebrations on Sunday.

He told PA the explosion felt like “an earthquake” and in the days before the gas smell had been so strong that “you could taste it”.

“We looked out of the window, and the house opposite had just gone – just rubble and debris,” he said.

Amarjit Kaur, known as Amy, said her windows shattered from the force of the explosion.

“I thought about the kids and I ran down the road,” she told PA.

“The night before I was gasping for air, so I took my asthma inhaler out before sleeping.

“The next morning, it felt like it got dark and the air was weird – like it was being sucked in – and then ‘boom’.

“I rang the police, there were dozens of people running down the street.”

Ms Kaur described the efforts of Mr Simms and Mr Kukanda as “heroic”.

“That’s human kindness, that two people risked their lives to go in without knowing the consequences themselves,” she told PA.

LFB said the cause of the explosion is unknown, and there is no update yet as to when residents can return to their homes.