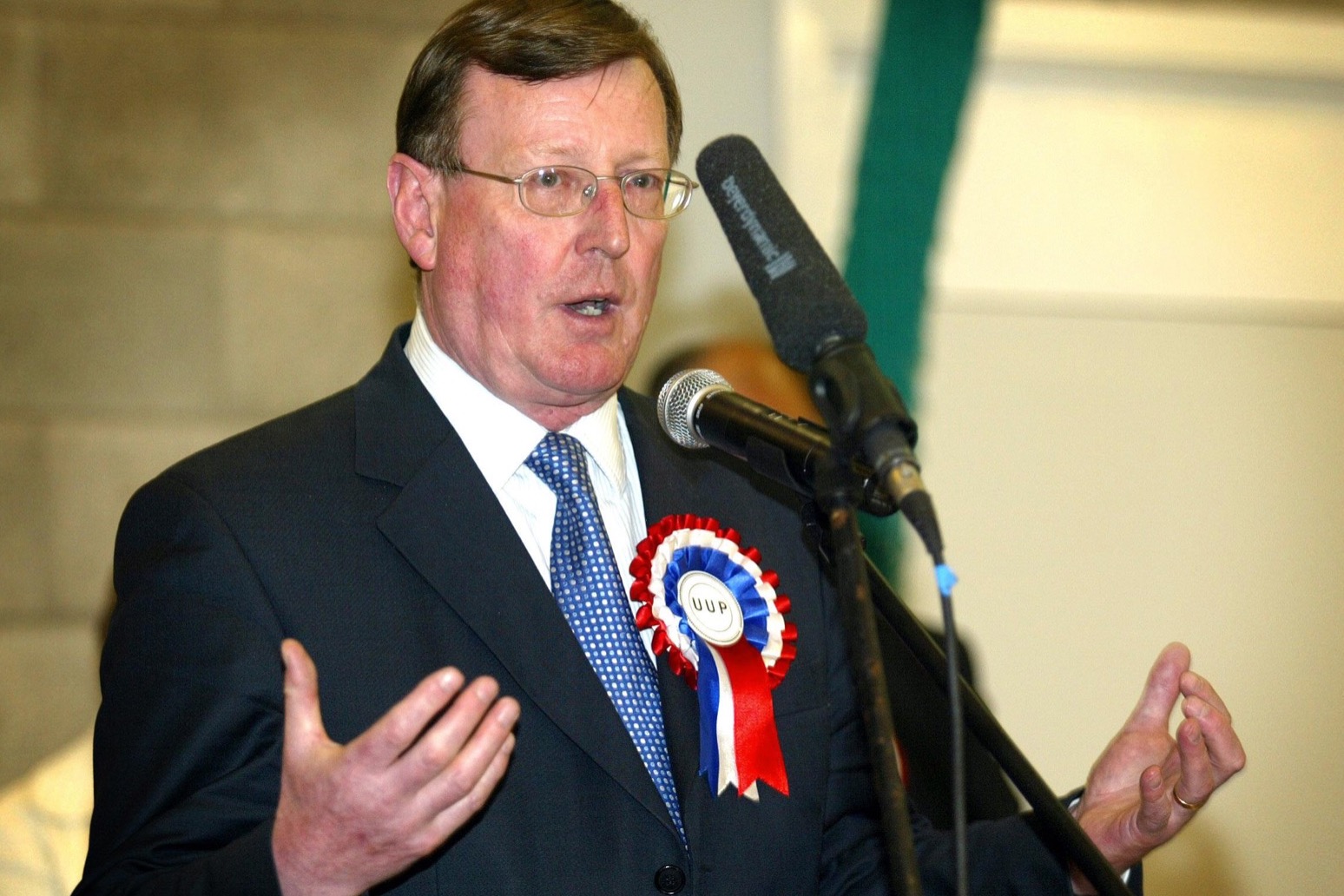 The 77-year-old ex-leader of the Ulster Unionist Party was one of the principal architects of the Good Friday/Belfast Agreement that ended decades of conflict in the region.

In a statement on Monday evening, his family said: “It is with great sadness that the family of Lord Trimble announce that he passed away peacefully earlier today following a short illness.”

Prime Minister Boris Johnson and Irish premier Micheal Martin were among those paying tribute to his legacy.

Mr Johnson tweeted: “He was a giant of British and international politics and will be long remembered for his intellect, personal bravery and fierce determination to change politics for the better.”

Mr Martin hailed the peer’s “central contribution” in setting the island on a journey towards peace and reconciliation.

“All of us in politics at the time witnessed his crucial and courageous role in the negotiations leading to the Good Friday Agreement and his leadership in building support in his party and his community for the Agreement,” he said.

“He chose to grasp the opportunity for peace when it presented itself and sought to end the decades of violence that blighted his beloved Northern Ireland,” he said.

Lord Trimble, from Co Down, distinguished himself in an academic career in the law faculty at the Queen’s University Belfast before moving into politics.

He initially became involved in the unionist offshoot organisation Vanguard in the early 1970s and while he was best known for his involvement with the Belfast Agreement, in his younger days he had opposed an earlier attempt, the Sunningdale Agreement.

He went on to join the then dominant Ulster Unionist Party in 1978.

It was at the university in 1983 that he heard the IRA’s gunshots which killed his fellow law professor and UUP colleague Edgar Graham and later identified the body.

He left academia for politics full time when he was elected as MP for Upper Bann following a by election in 1990 after the death of the incumbent Harold McCusker.

Lord Trimble rose to prominence partly due to the Drumcree dispute as nationalist residents opposed the procession of an orange parade along the Garvaghy Road.

He led the parade along the road in 1995, famously joining hands with Democratic Unionist leader Ian Paisley.

A few months later, Lord Trimble unexpectedly won the leadership of the Ulster Unionist Party over the favourite Lord Kilclooney, starting his often turbulent time at the helm of the party.

He marked a number of firsts as Ulster Unionist leader, including becoming the party’s first leader in 30 years to meet with the Irish premier in Dublin and in 1997 he became the first unionist leader since partition to negotiate with Sinn Fein.

The peace talks, which started formally in 1998 under the chairmanship of former US senator George Mitchell, saw many nights of intensive negotiation pressed on by then prime minister Tony Blair, taoiseach Bertie Ahern and then US president Bill Clinton.

The process faltered several times but perhaps most notably when then Ulster Unionist Jeffrey Donaldson walked out of the talks.

However on April 10 1998 the agreement was signed, and endorsed following a referendum held the following month.

But the path of devolved government was far from smooth for the two men, with the issue of the paramilitary groups decommissioning overshadowing Stormont.

He resigned as leader of the party whose once dominant Westminster representation had been reduced to just one seat.

He was made a life peer the following year and later took up his seat in the House of Lords as a member of the Conservative Party to have, he said, great influence on UK politics.

While generally socially conservative in outlook, Lord Trimble admitted in July 2019 that he had changed his position on equal marriage after his daughter Victoria married her girlfriend in 2017.

Lord Trimble’s final public appearance came at the end of June at the unveiling of a portrait of him by artist Colin Davidson at the Queen’s University.

He then reflected on the approach of the 25th anniversary of the Belfast Agreement, and pointed out it has survived despite the objections.

“The Good Friday Agreement is something which everybody in Northern Ireland has been able to agree with, it doesn’t mean they agree with everything, there are aspects which some people thought were a mistake, but the basic thing is that this was agreed,” he told PA.

“People are actually not throwing the agreement to pieces, their complaints are still based on the existence of the agreement.

“They are not saying ‘throw it out’, so that’s the thing to bear in mind.”

He was also sharply critical of the UK government over Brexit trade arrangements.

Lord Trimble is survived by his wife Daphne and sons and daughters, Richard, Victoria, Nicholas and Sarah.