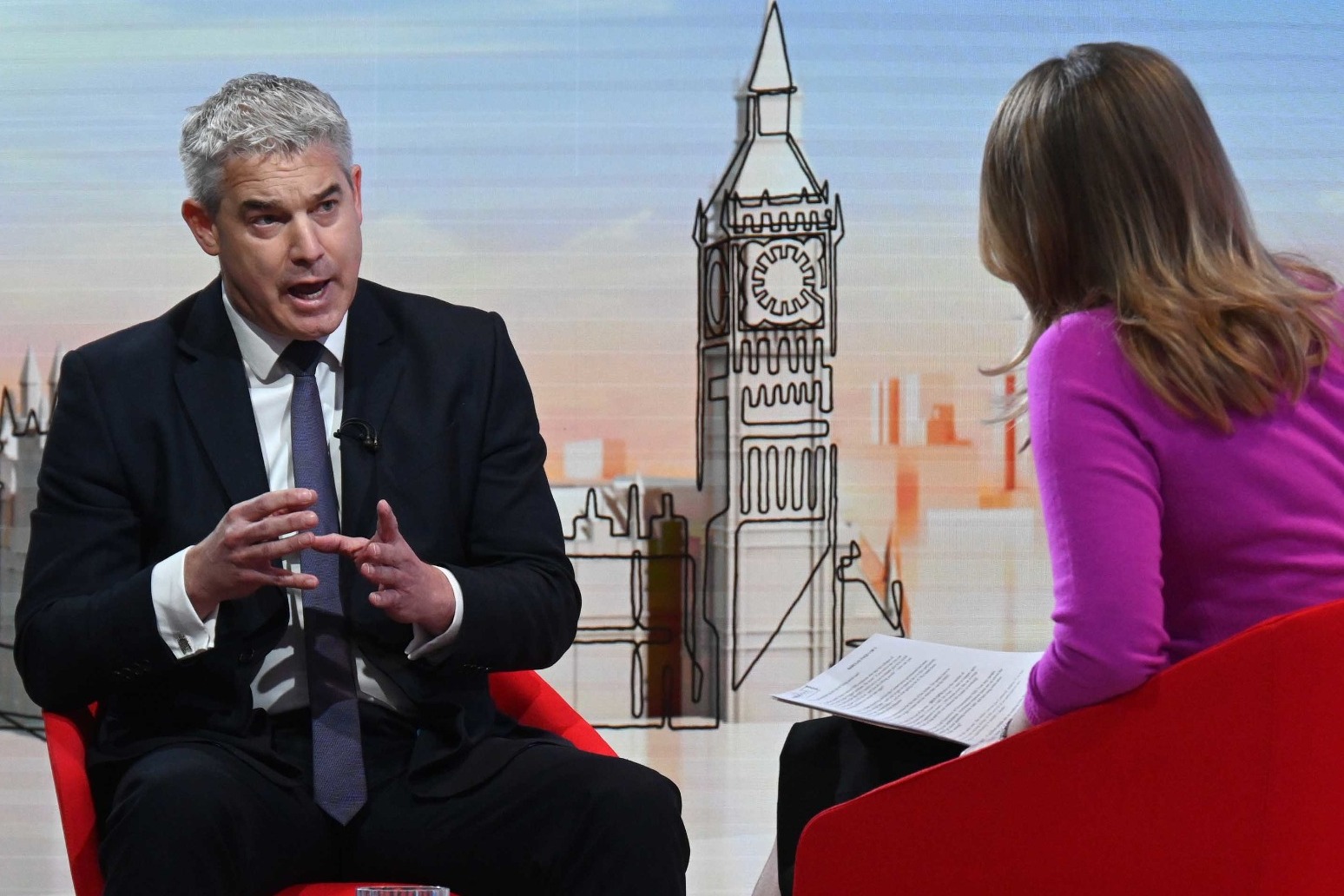 Health Secretary Steve Barclay said the Government has not abandoned the promised reforms of social care as he acknowledged the NHS was under “severe pressure”.

Mr Barclay insisted the pressures on the NHS were “predominantly” to do with the pandemic, but admitted the entire crisis could not be blamed on Covid-19.

It comes in the wake of an autumn statement that saw Chancellor Jeremy Hunt announce the health service will receive an extra £3.3 billion in each of the next two years while £4.7 billion will go into social care.

However, the Government has also faced criticism for the decision to push back long-promised social care reforms to October 2025.

The reforms include an £86,000 cap on personal care cost contributions and an expanded means test that is more generous than the existing one, which had been due to come into effect from October 2023.

Mr Barclay said it was a “difficult decision to delay” but told the BBC’s Sunday with Laura Kuenssberg programme that current circumstances had forced the decision.

He said: “The Chancellor himself – when doing my job as health secretary – was very committed to these reforms. That’s why it has been a difficult decision to delay but what we recognise is we need more care packages in social care.”

Pressed on how the delay could be justified, he said: “Well, the local government bodies have themselves asked us to delay because, obviously, they were concerned about such a major change at a time when, as a consequence of a pandemic, the market is under such pressure within the care system.”

On Sky News, he also signalled plans to scale back the number of NHS targets.

“There is a place for targets but if everything is a priority, nothing’s a priority,” he said as he responded to a report in the Mail on Sunday suggesting the Government was eyeing up a “bonfire” of NHS red tape and targets.

He said that at a local level officials are “better able to tailor the priorities for their local needs”.

“No-one is suggesting we don’t have any targets,” he said.

The Liberal Democrats were quick to hit out at Mr Barclay on Sunday, with the party’s health spokesperson Daisy Cooper accusing him of speaking in a “jumble of jargon”.

“This Conservative government cannot continue to blame the coronavirus pandemic for years of neglect and mismanagement of our NHS,” she said.

Gary Smith, GMB general secretary, called the Health Secretary “deluded” over the need to fund the NHS and care services.

Appearing on the same BBC programme, he said: “People are dying because of cuts to services, so I find that interview utterly dishonest and frankly the minister is deluded.”

It comes amid warnings the NHS is likely to remain on a “crisis footing”, with rising waiting lists despite extra funding.

The Health Foundation believes that while the increase to the NHS budget will provide “temporary respite”, health and care services will face “difficult trade-offs” on issues such as pay and the backlog.

Its analysis found the increase to spending over the next two years amounts to 2% each year in “real terms”.

The annual increase for the next two years is 1.2% in real terms “which is below the average” seen in the decade preceding the pandemic (2%), as well as the historical average of around 3.8%, the analysis indicated.

“The reality is that the NHS is going to be treading water at best, as inflation bites and it faces rising pressures from an ageing population, pay, addressing the backlog and ongoing Covid costs.

“If other parts of the system – especially social care and community care – are also struggling with cost pressures, this makes it harder to deliver healthcare and the 2% will buy less.

“Efficiency can only take the NHS so far. As Health Foundation analysis this week showed, since 2010, if we had kept up with German health spending we’d have spent £73 billion more each year, and £40 billion more if we’d kept up with France.

“Without greater recognition that our health is our wealth — and vice versa – and a greater focus on its long-term financial sustainability, the NHS is likely to remain on a crisis footing, with difficult trade-offs like performance and rising waiting lists for the foreseeable future.”

It went on to say England’s growing and ageing population, NHS Long Term Plan commitments, long waiting list for elective care and workforce shortages and pay are driving up pressure on the health service.

Royal College of Nursing England director Patricia Marquis said: “This analysis suggests that, like nursing pay, after a decade of low funding growth or – for pay – real-terms cuts, NHS budgets should be rising sharply now but aren’t.

“We’ve called on the Government to be bold and take a radical new direction with serious investment in nursing, including fair pay, but this analysis only appears to confirm our worst fears that today’s ministers are stuck on yesterday’s ideas of giving yet more pay cuts.”