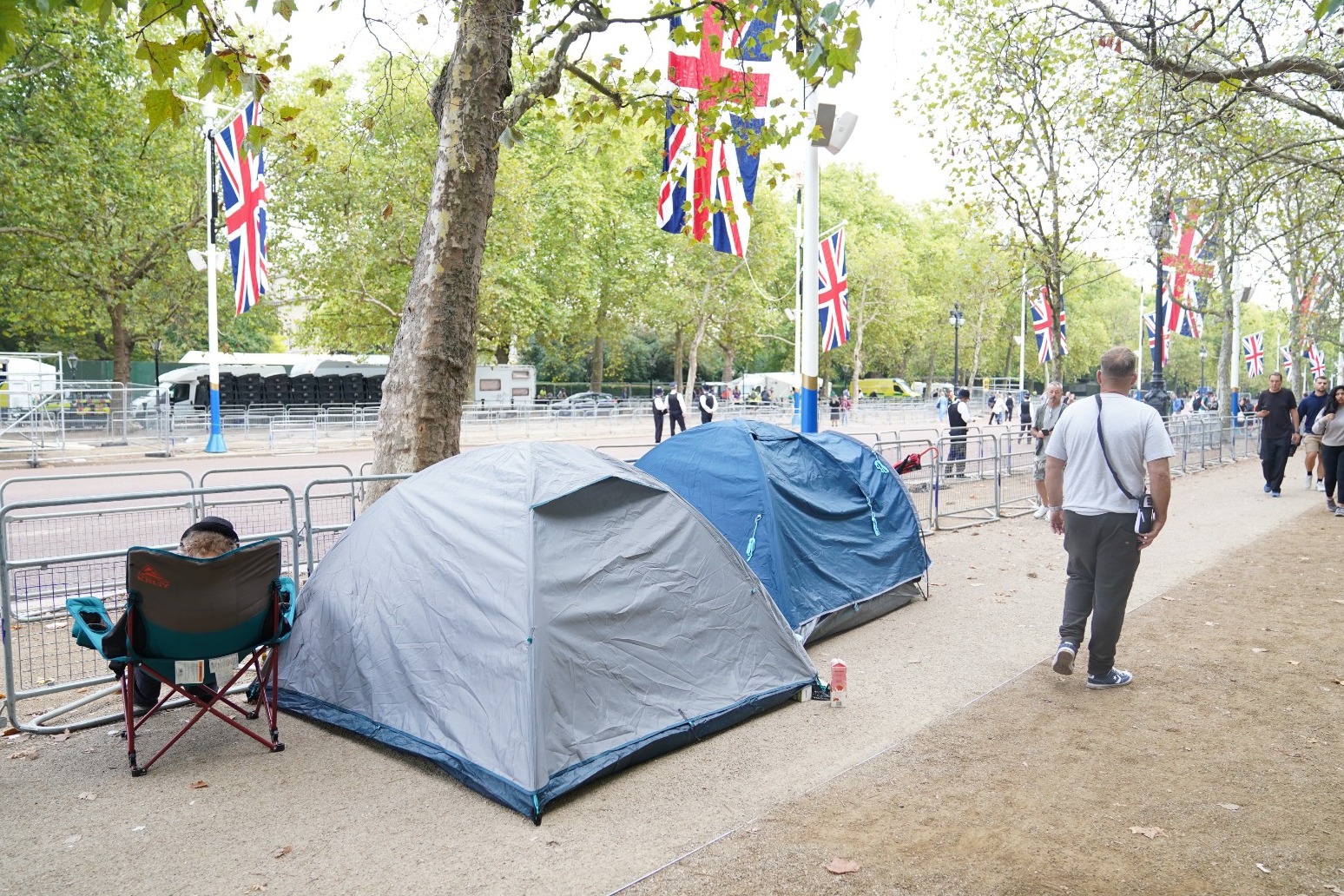 The Duke of Sussex said he will “honour” his father as large crowds are expected in Scotland on Monday to see the King lead the royal family in a procession behind the coffin of the Queen.

Harry’s emotional statement also paid tribute to his grandmother’s “everlasting legacy”, saying: “You are already sorely missed, not just by us, but by the world over.”

He reflected on his “first meetings” with the Queen, including “the first moment you met my darling wife and hugged your beloved great-grandchildren”.

And in a poignant final line referencing the late Duke of Edinburgh, he said: “We, too, smile knowing that you and grandpa are reunited now, and both together in peace.”

Harry also referenced his father, with whom his relationship is said to have been strained, saying: “And as it comes to first meetings, we now honour my father in his new role as King Charles III.”

Later, the Queen will be taken from the Palace of Holyroodhouse to nearby St Giles’ Cathedral where her family, and a congregation drawn from all areas of Scottish society, will attend a service of thanksgiving for her life.

Full details about the royal mourners have yet to be released but there is speculation that Harry and the Duchess of Sussex and the Prince and Princess of Wales, who on Saturday put on a united front during an appearance at Windsor Castle, will be part of the group.

Charles will lead some of the royals – expected to be the Duke of York, Earl of Wessex and the Princess Royal and her husband Vice Admiral Sir Tim Laurence – on foot, while the Queen Consort and other members of the monarchy follow in cars.

Members of the public will be able to view the coffin to pay their respects for 24 hours before it is taken to London to lie in state.

Later in the evening, the King and other members of his family, likely his siblings, will hold a vigil at the cathedral in honour of the Queen.

Charles and Camilla are in London and, before leaving for the Scottish capital, will visit Westminster Hall, where both Houses of Parliament will express their condolences to the new monarch and his wife, with the King giving his reply.

During his day in Edinburgh, the King will inspect a guard of honour at the Palace of Holyroodhouse before attending a ceremony of the keys on the forecourt.

Words of sympathy will be expressed by the Scottish Parliament when Charles and Camilla attend to receive a motion of condolence, with the King replying.

Ms Johnstone told BBC Radio 4’s Today programme that parliament will “come together to express through a motion of condolence our deepest condolences to His Majesty the King and to the royal family”.

She added: “The tone will be respectful. This afternoon gives us an opportunity to reflect on the life of Her Majesty, Queen Elizabeth, to pay gratitude for that life and to ensure that the royal family have the support… the heartfelt sympathies of the Scottish people.”

“We’re expecting tens of thousands of people to be up and down the high street as Her Majesty comes up to St Giles’ and then onwards from there tomorrow,” he told BBC Radio Scotland.

“Our advice to people is to get to the city centre as quickly and early as you can (and) use public transport because the city has diversions or road closures.

“We are looking forward to welcoming tens of thousands of people to give Her Majesty the send off that the city will give her.”

Scottish Tory leader Douglas Ross said: “The Queen loved Scotland and Scotland loved the Queen and I think we showed that yesterday.

“I think we’ll see that again today with the service of thanksgiving, and I think it is a fitting tribute to the late Queen that Scotland is able to play this role at this early part in the national mourning,” he told BBC Radio 4.

Liberal Democrat leader Sir Ed Davey said the King’s appearance in Parliament will be a moment of “reflection” and “great sadness”.

“It’s a part of Westminster which is resplendent with history,” he told Sky News.

Meanwhile, former head of the British Army, Lord Dannatt, said the armed forces have a “special bond” with their monarch.

“Much has been made of the fact that when we join the Army, Navy, Air Force, whatever, we sign, we swear an oath of allegiance.

“Seamlessly, when the Queen breathed her last last Thursday, our allegiance as soldiers of the Queen, we immediately became soldiers of the King. And that’s a very special link that the military have.