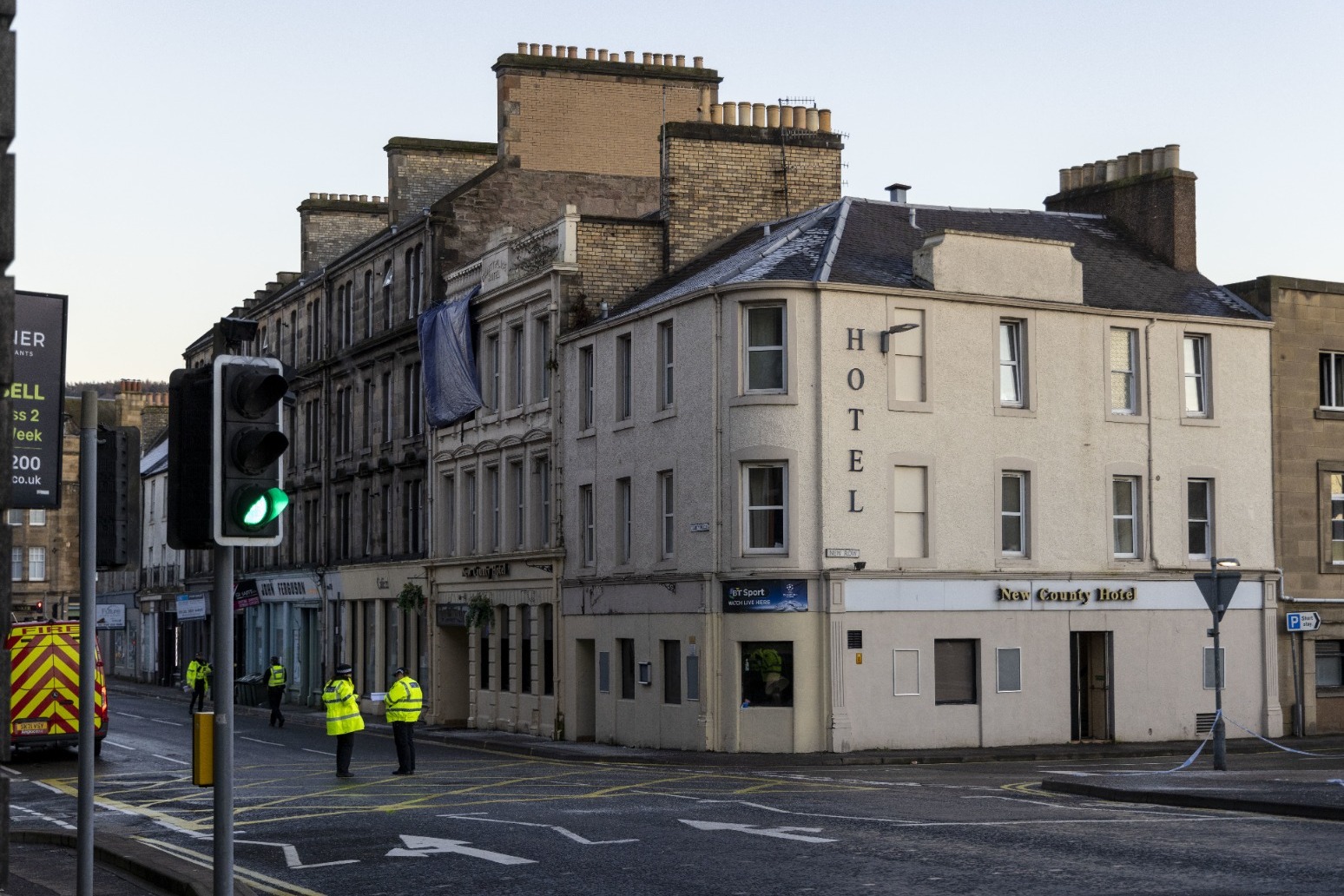 An investigation is under way after three people and a dog died following an early-morning blaze at a hotel in Perth and Kinross.

Emergency services were called to the New County Hotel in Perth just after 5am on Monday.

Police Scotland said that three people were confirmed dead at the scene.

At its height, more than 60 firefighters were involved in tackling the blaze, which the Scottish Fire and Rescue Service described as a “very complex incident”.

Guests were evacuated from the hotel, as were two people staying in a neighbouring block of flats.

Eleven people were treated at the scene but did not need hospital treatment.

Mr Swinney, MSP for Perthshire North, tweeted: “My sympathies with all affected by this tragedy.”

Police Scotland and the Scottish Fire and Rescue Service have launched a joint investigation into the incident.

Chief Superintendent Phil Davison said: “Our thoughts are very much with the families and loved ones of those who have died at what is a very difficult time for everyone.

“Our inquiries are ongoing to establish the full circumstances of what has happened and officers are conducting a joint investigation with the Scottish Fire and Rescue Service.”

Police Scotland said officers were called to the hotel in County Place shortly before 5.10am.

“This was a very complex incident where tragically three people were pronounced dead at the scene.

“Our thoughts are very much with the immediate family and friends at this difficult time.

“Our firefighters worked extremely hard in a very complex and challenging environment to prevent the further spread of fire and damage where possible.

“At its height, we had nine fire appliances in attendance with over 60 firefighters.

“We’re currently still in attendance to make sure the scene is safe. I would like to thank our crews and our other emergency partners and local authority for their support.

“Our firefighters and community action teams have and will continue to engage to ensure safety in this area and we will continue to work closely with stakeholders and Police Scotland in any subsequent investigation.”

Roads surrounding the hotel were closed off with members of the public asked to avoid the area.

A Scottish Ambulance Service spokesperson said: “We received a call from Scottish Fire and Rescue Service of a fire at the New County Hotel in Perth at 05:05hrs.

“We dispatched 21 resources, including our Special Operations Team, and attended to 14 casualties. Eleven patients did not require hospitalisation, but sadly three patients died at the scene.

“Our thoughts remain with those who have been affected by this incident.”

People in the area have been left shocked by what happened.

Zeak Muhammad, from Glasgow, who has been visiting people in the area with a friend, said: “It’s a shame, we’ve been here for five days and we couldn’t believe it, it’s absolutely shocking, seemed like such a nice hotel as well.

“You never expect anything like that to happen. My thoughts are with their family.

“I’m really shocked, we saw all the roads closed early and had no idea what had happened until someone told us.”

One 37-year-old woman, who did not wish to be named, said: “I’m really shocked – it’s really shocking.

“We’ve lived around here for a long time and nothing like this has ever happened, it’s a real tragedy for everyone involved.

“We live just around the corner from here and could see the flames earlier on.”

Local MP Pete Wishart said the fire was “simply awful news at the beginning of the year when so many people are out celebrating”.

Mr Wishart, who represents Perth and North Perthshire, added: “My thoughts are firmly with the families and friends of the victims.

“When the news broke, we all hoped that everyone would make it out and would be accounted for. This is the last thing that anybody expected.

“I know the people of Perth will be devastated by this news and would like to extend their deepest sympathies to those affected by this tragedy.

“Can I also thank the emergency services who attended the scene in such numbers.”