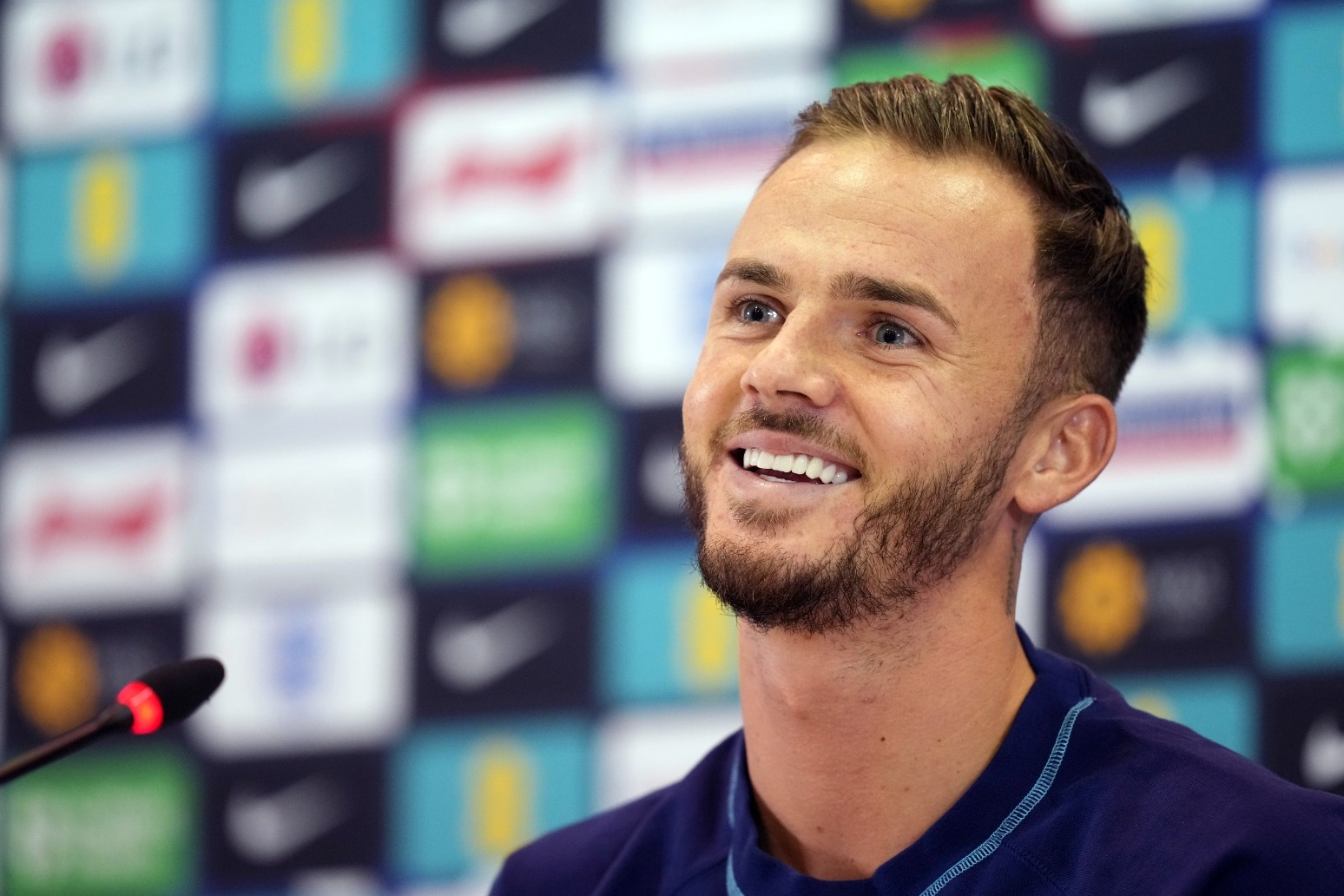 Southgate admitted Maddison’s recent form was too good to ignore, when naming his squad for the tournament

James Maddison is delighted to be gearing up for a World Cup rather than reclining on a sun lounger after his repeated England rejections helped fuel his return to Gareth Southgate’s squad.

The 25-year-old’s only cap to date came in 2019 and the midfielder was braced to miss out on the 26-man selection for Qatar having been overlooked during previous purple patches at Leicester.

But Southgate admitted Maddison’s form was too good to ignore upon surprisingly ending his three-year international absence when naming his World Cup squad last Thursday.

The midfielder said he never felt like the door was closed on him during that period and harnessed that disappointment “as motivation to try and get back in and force my way back in”.

Now the player who still feels like “that little boy who is kicking the ball around in the garden on or with (England) face paint on” is ready to deliver in Qatar.

“I’ve only had 30 minutes of international football,” Maddison said. “But I’m a player who has a lot of self-belief.

“If called upon, I believe that I am a player who can make something happen. And I’ll continue with that confidence because I think that all the top players have that sense of confidence – you feel it – that borders on arrogance.

“But there’s a line and you hear a lot of ex-players talking about it but you’ve got to have that confidence and I wouldn’t be here without that confidence.

“So, if called upon, I will do my best to produce that moment of magic and have that self-belief that I do belong at this stage.”

Maddison became the first player to speak upon England’s arrival in Qatar, saying “every moment at the minute is almost like a pinch me moment” having been prepared to watch the World Cup on TV.

The 25-year-old admitted he was fearing the worst when the squad was announced, meaning he had pencilled in a break to sunny climes.

“I was going to go on holiday,” said Maddison, who downplayed concerns over a knee complaint after positive scans.

“I was preparing for both. The dream and hope was obviously to be at the World Cup.

“But if not it would have been a midseason break and a chance for me to go on holiday and recharge the batteries for the second half of the Premier League season.

“I would have gone and put my feet up on holiday with my son and my family.”

Family was the first thing on Maddison’s mind after finding out about his World Cup call-up, leading to tears from his normally stoic dad when he called home.

“On the day of the announcement, after training I wanted to go back and see them in Coventry,” he said.

“I had dinner at home with my mum and dad, my little boy and my partner. I wanted to see them.

“That’s a moment I will cherish forever. The phone call was a bit of a blur, I couldn’t tell you what Gareth said. It was a very heart in mouth moment.

“But I wanted to go back and see my mum and give her a big hug. It was a special day for all of us, one I will never forget.”

Maddison initially missed Southgate’s call and smiled when he said his number was still saved on his phone, playfully nodding to his extended absence from the England set-up.

Many have put that spell in the international wilderness down to an incident in October 2019, when he was pictured in a casino after leaving the squad due to illness.

Southgate last week insisted that was not behind his absence in recent years, saying it “wasn’t the drama it seemed to be for everybody else” – a view echoed by Maddison.

“I thought that might get brought up – and I’m actually glad you asked,” he said at England’s media base in Al Wakrah.

“People forget that I was actually capped by Gareth Southgate and called up after the casino incident and it wasn’t a big deal at the time for Gareth.

“It got blown out of proportion and some of it was ridiculous to what actually happened.

“That was in the past and I don’t want to go into the details of what actually happened. It wasn’t a big deal then.

“I was actually capped after that incident so people who often say… I think they’re just making an excuse up for me as to why I wasn’t in the squad but I don’t think that was the case.

“We had already spoke about it and put it to bed and I was called up and capped after that. That was never a concern, that was more outside noise from you lot I think.”