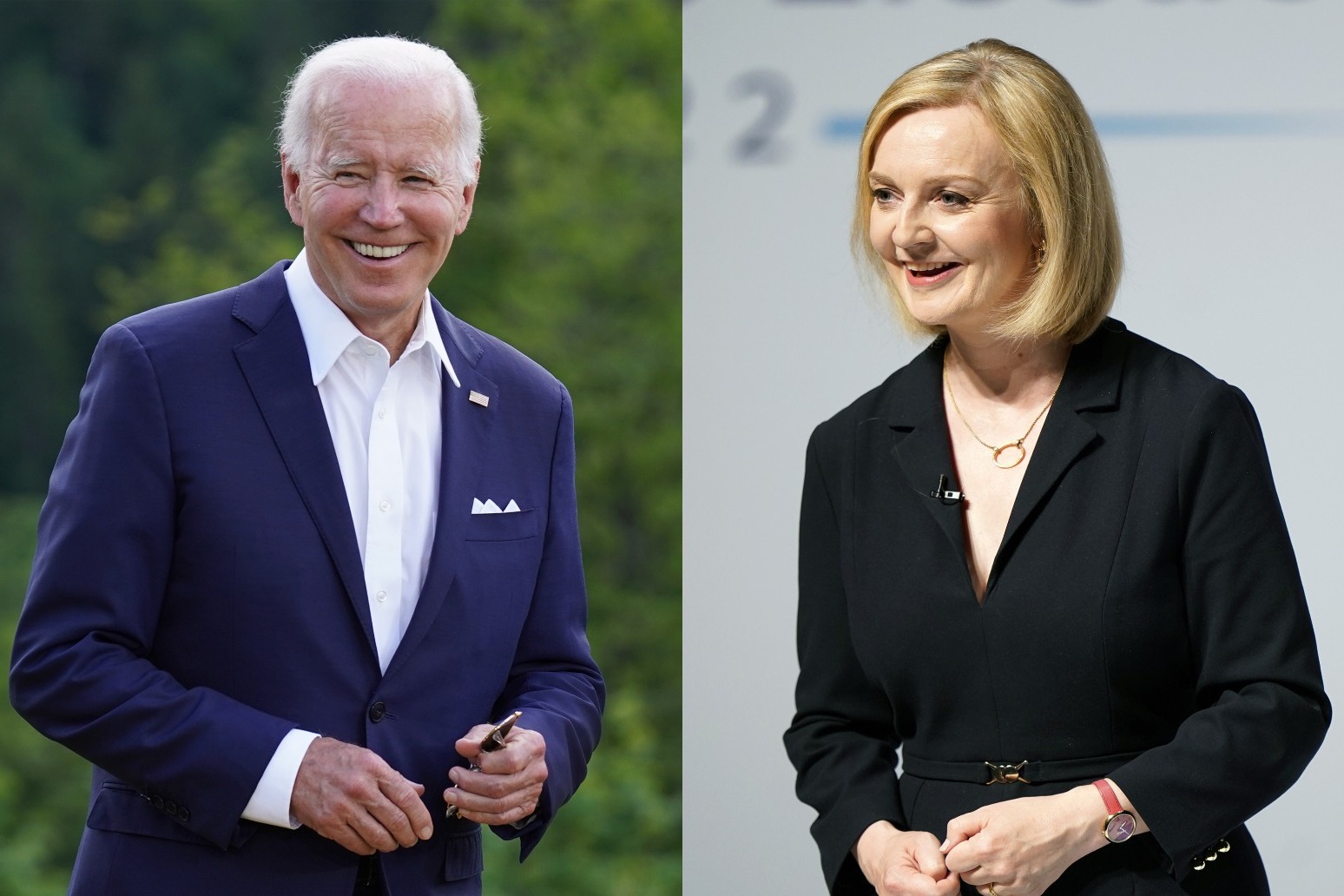 The US President has stressed the importance of reaching an agreement with the EU over post-Brexit legislation on Northern Ireland in his first phone call with the new Prime Minister.

The transatlantic relationship could be strained if Liz Truss pushes ahead with the plan to override parts of the Northern Ireland Protocol, with Joe Biden proud of his Irish roots and taking a keen interest in the issue.

According to the White House’s account of the call, the two discussed their “shared commitment to protecting the gains of the Belfast/Good Friday Agreement and the importance of reaching a negotiated agreement with the European Union on the Northern Ireland Protocol”.

The White House said the leaders also “discussed the importance of continued close cooperation on global challenges, including supporting Ukraine as it defends itself against Russian aggression, addressing the challenges posed by China, preventing Iran from ever acquiring a nuclear weapon, and securing sustainable and affordable energy resources”.

A Downing Street spokeswoman said the pair reflected on the “enduring strength” of the special relationship between the UK and US.

“The Prime Minister and President Biden reflected on the enduring strength of the special relationship. They agreed that the partnership between our countries, fortified by our shared values, has been crucial for defending and advancing freedom and democracy in the world.

“They agreed to build on those links, including by furthering our deep defence alliance through Nato and Aukus.”

Earlier, Mr Biden was the first world leader to congratulate Ms Truss on her new position.

“I look forward to deepening the special relationship between our countries and working in close cooperation on global challenges, including continued support for Ukraine as it defends itself against Russian aggression.”

Ms Truss also accepted an invitation to visit Ukraine from President Volodymyr Zelensky during her first phone call as Prime Minister with a foreign leader.

In a statement, the Ukrainian president said he had thanked the British people for their support.

Mr Zelensky tweeted: “I became the 1st foreign leader to have a conversation with the newly elected (British) PM @trussliz. Invited her to (Ukraine). Thanked (British) people for the major defense & economic aid for (Ukraine). It’s important that (Britain) is ready to further strengthen it. Attention was paid to security guarantees.

“We discussed the participation of (Britain) in the recovery of (Ukraine). Coordinated further pressure on the RF (Russian Federation). The goal is to stop the aggression & bring the perpetrators to justice. It’s important to designate the RF a terrorist state. We’ll continue active interaction in all formats.”

A Downing Street spokeswoman said that Ms Truss had told the Ukrainian president that his country could count on the UK’s assistance “for the long term”.

“In her first call with a counterpart since becoming Prime Minister, she reiterated to the Ukrainian leader that he had her full backing, and Ukraine could depend on the UK’s assistance for the long term,” she said.

“President Zelensky thanked the Prime Minister for the UK’s staunch support and congratulated her on her appointment.

“The leaders discussed the need to strengthen global security and the measures necessary to cut off the funds fuelling Putin’s war machine.

“The leaders deplored Putin’s attempts to weaponise energy, and the Prime Minister said it was vital Russia’s blackmail did not deter the west from ensuring Putin fails. She also underscored the importance of ensuring the UK and our allies continue to build energy independence.”

The spokeswoman added that the Prime Minister was “delighted” to accept an invitation to visit Ukraine.

“She praised the Ukrainians’ fight for sovereignty and self-determination and said it was essential Ukraine succeeds and Russia fails,” she said.

“The Prime Minister said she looked forward to working with the president in the coming weeks and months and was delighted to accept an invitation to visit President Zelensky in Ukraine soon.”