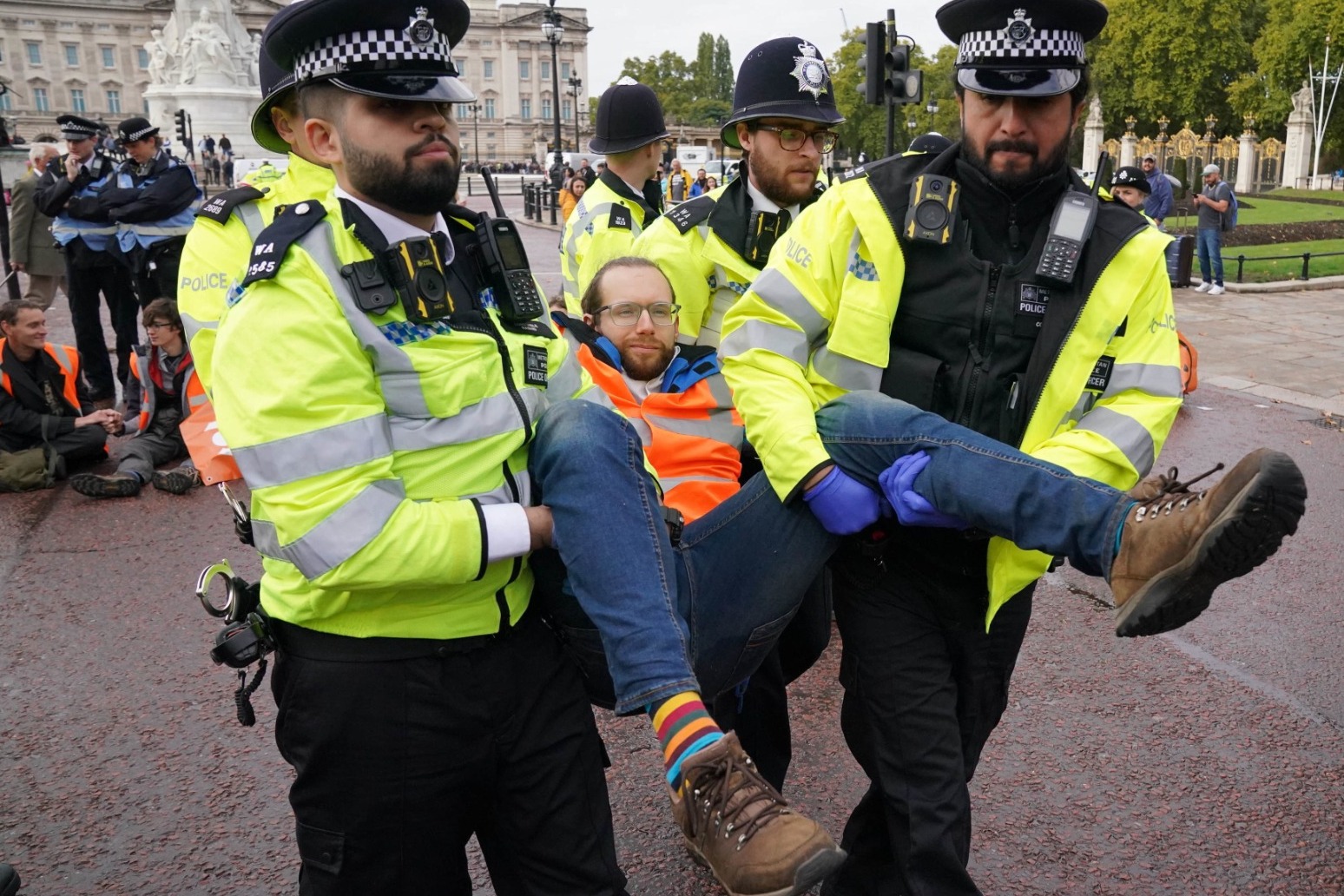 Environmental protesters blocked The Mall outside Buckingham Palace in a demonstration against new fossil fuel licences.

Police at the scene said they made 25 arrests after disruption lasting just over two hours.

The protesters, who travelled from Scotland, said they felt the need to act after the UK Government gave its backing in September to an expansion of oil and gas operations in the North Sea.

The North Sea Transition Authority (NSTA) is expected to undertake a new round of oil and gas licensing this month.

Scottish Secretary Alister Jack said that could lead to more than 100 new licences being granted, which he claimed could “safeguard” UK energy supplies and support more than 70,000 jobs in Scotland.

But Emma Brown, who was among the demonstrators in London on a rainy morning, described the new licences as “a death sentence for all of us here”.

The 31-year-old, who lives in Glasgow and was attending her first such protest, made a reference to the well-known Proclaimers hit when she said that the activists “would walk 500 miles” to “just stop oil”.

She said: “We’ve come down because the Government is pressing ahead with over 100 new fossil fuel licences.

“And that is literally a death sentence for all of us here and for all of you.

“So we can’t allow this to continue. We have to have a cut-off somewhere.

A Scottish man on a bicycle gave words of support, telling them: “Go on the protesters, you’re doing great work. Stay strong.”

Asked by one police officer how long they intended to stay at the scene, a protester replied: “Until we get a new government.”

A police liaison officer said: “Let me know if I can I do anything for you.”

The protester replied: “Not unless you have a letter from Liz Truss.”

Officers searched the protesters, some of whom had glued their hands together.

Police told the demonstrators that they intended to clear the road for the Changing of the Guard on Monday morning.

While some protesters left of their own volition at around 10am and were taken to a police van, others were physically lifted by officers to different vans.

A Government spokesperson said: “We remain fully committed to reaching net zero by 2050 and the UK is forging ahead of many other countries on net zero – with 40% of our power now coming from cleaner and cheaper renewable sources.

“But with Russia weaponising energy across Europe, we must make sure we do so in a way that protects energy security, by boosting homegrown energy supply and reducing our dependence on foreign imports.

“This includes increasing domestic gas supply, which we’ve always been clear will have a role in our transition to net zero. But we will also continue to drive forward our commitments on nuclear and renewables like offshore wind.”