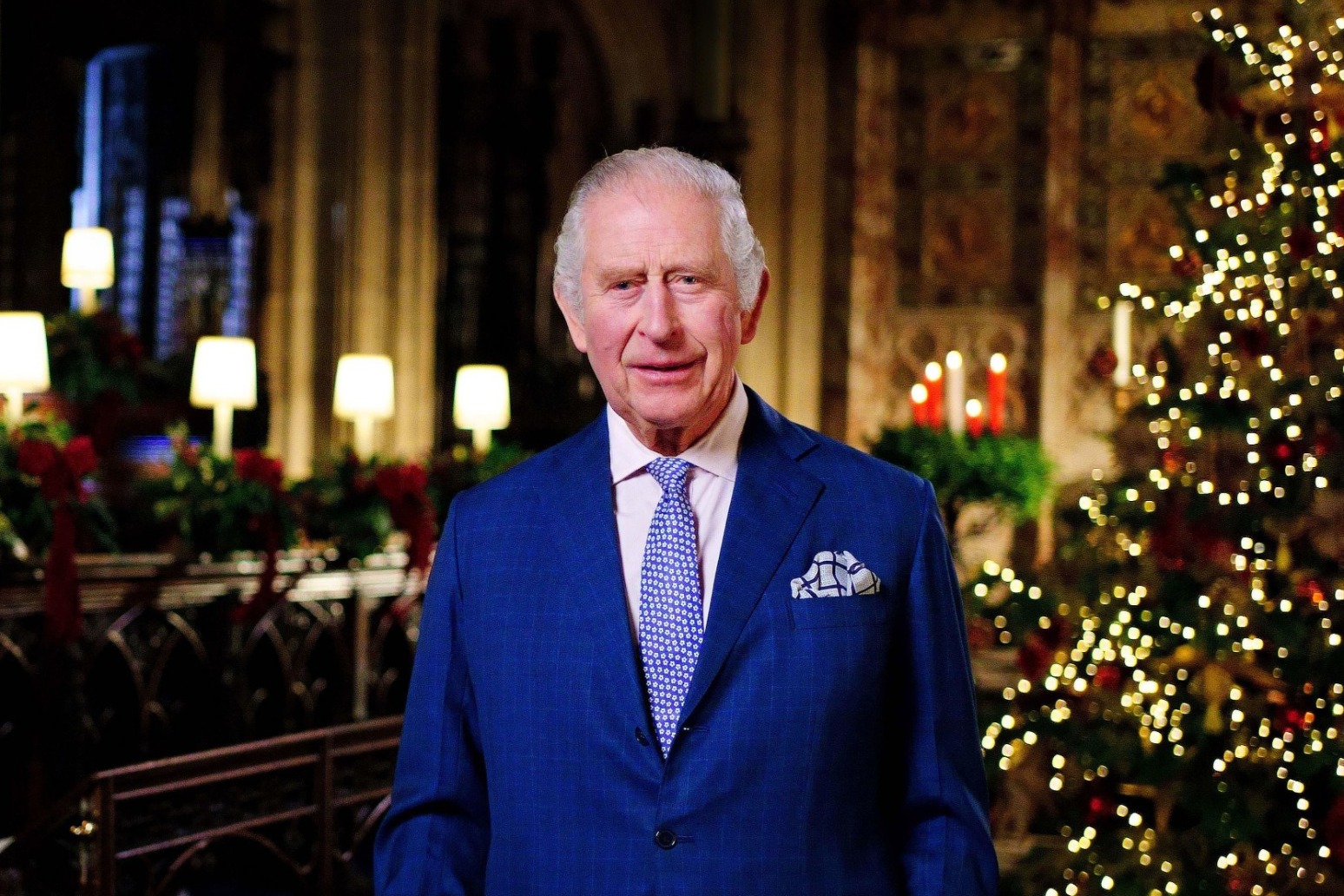 His Majesty has delivered his inaugural festive message to the nation

The King has used his first Christmas broadcast to sympathise with families struggling with the cost-of-living crisis and praise individuals, charities and faith groups supporting those in need.

Charles spoke about the “great anxiety and hardship” experienced by many trying to “pay their bills and keep their families fed and warm” during his televised message, which featured footage of a food bank and other scenes of meals being distributed to the homeless.

The country is grappling with an economic crisis due in part to the war in Ukraine and the monarch also praised volunteers, paying tribute to the “wonderfully kind people” who donated food or their time.

Charles delivered his historic Christmas broadcast standing in the quire of St George’s Chapel, mirroring the late Queen’s 1999 festive address, and it followed his mother’s well-established template, a personal reflection on the year, touching on current issues and with a Christian framework.

But the King also recognised other faiths, highlighting how religious communities were helping those in financial difficulties and, like Christians, believed in the “power of light overcoming darkness”.

The central theme was a celebration of “selfless dedication”, a value embodied by Queen Elizabeth and reflected in the actions of many, from the emergency services to public spirited individuals, which helped to build and strengthen communities.

The pre-recorded message began with Charles reflecting on how he was standing “so close to where my beloved mother, the late Queen, is laid to rest with my dear father” in the King George VI Memorial Chapel, and he thanked the public for the “love and sympathy” expressed in cards and messages of condolence.

He also described how the festive period was a “poignant time” for bereaved families, adding “We feel their absence at every familiar turn of the season and remember them in each cherished tradition”.

Charles said he shared the late Queen’s “faith in people” who can touch the lives of others with “goodness and compassion”, something he described as the “essence of our community and the very foundation of our society”.

These qualities were reflected in the “selfless dedication” of the armed forces, health and social care professionals, teachers and all those who work in public service.

His words come as the nation faces a series of strikes by public sector workers, including nurses, ambulance workers and Border Force staff.

Charles added: “And at this time of great anxiety and hardship, be it for those around the world facing conflict, famine or natural disaster, or for those at home finding ways to pay their bills and keep their families fed and warm, we see it in the humanity of people throughout our nations and the Commonwealth who so readily respond to the plight of others.

“I particularly want to pay tribute to all those wonderfully kind people who so generously give food or donations, or that most precious commodity of all, their time, to support those around them in greatest need, together with the many charitable organizations which do such extraordinary work in the most difficult circumstances.”

Footage was shown of the armed forces and emergency services at work, from soldiers carrying sandbags to a speeding ambulance, followed by doctors and nurses on a ward and care workers in a home.

The King’s son and daughter-in-law were shown during a visit to St Thomas Church in Swansea in September, and he said: “The Prince and Princess of Wales recently visited Wales, shining a light on practical examples of this community spirit.”

William and Kate’s trip to Swansea, and earlier that day to Anglesey, was their first visit to Wales since receiving their titles and the prince helped pack a family food parcel for a foodbank based at the St Thomas, while the princess chatted to community nursery nurses who refer mothers to the church’s on-site baby bank.

Other members of the royal family were shown at official events from the Queen’s 2018 visit to the RAF Club in London to the Queen Consort handing children Paddington bears left in memory of the late monarch.

The Earl and Countess of Wessex and Princess Royal were also featured but there were no images of the Duke and Duchess of Sussex, who stepped down as working royals in 2020.

A few days before the late Queen’s funeral on October 19, Charles told faith leaders gathered at Buckingham Palace, as monarch he had an important role to discharge “…the duty to protect the diversity of our country, including by protecting the space for faith itself and its practise through the religions, cultures, traditions and beliefs to which our hearts and minds direct us as individuals.”

He recognised those other faiths when he said in his Christmas message: “Our churches, synagogues, mosques, temples and gurdwaras, have once again united in feeding the hungry, providing love and support throughout the year.

“Such heartfelt solidarity is the most inspiring expression of loving our neighbour as our self.”

Among the collection of video clips showing the King at official events, Charles was seen wearing a Sikh rumal, or handkerchief, on his head as a mark of respect during a visit to the Guru Nanak Gurdwara in Luton earlier this month, and receiving condolences from the public during a walkabout outside Buckingham Palace in September.

His own faith was another central theme and he spoke about fulfilling a “life-long wish” to visit Bethlehem in 2020 and stand close to the sacred site in the Church of the Nativity that marks the spot where Christians believe Jesus Christ was born.

Charles, who in the past has described himself as a “committed Anglican Christian”, said in the address: “It meant more to me than I can possibly express to stand on that spot where, as the Bible tells us, ‘The light that has come into the world’ was born.”

The Christmas broadcast, written by the King and lasting eight minutes, ended with a message for the religious and those with no beliefs: “While Christmas is, of course, a Christian celebration, the power of light overcoming darkness is celebrated across the boundaries of faith and belief.

“So, whatever faith you have, or whether you have none, it is in this life-giving light, and with the true humility that lies in our service to others, that I believe we can find hope for the future.

“Let us therefore celebrate it together, and cherish it always.”