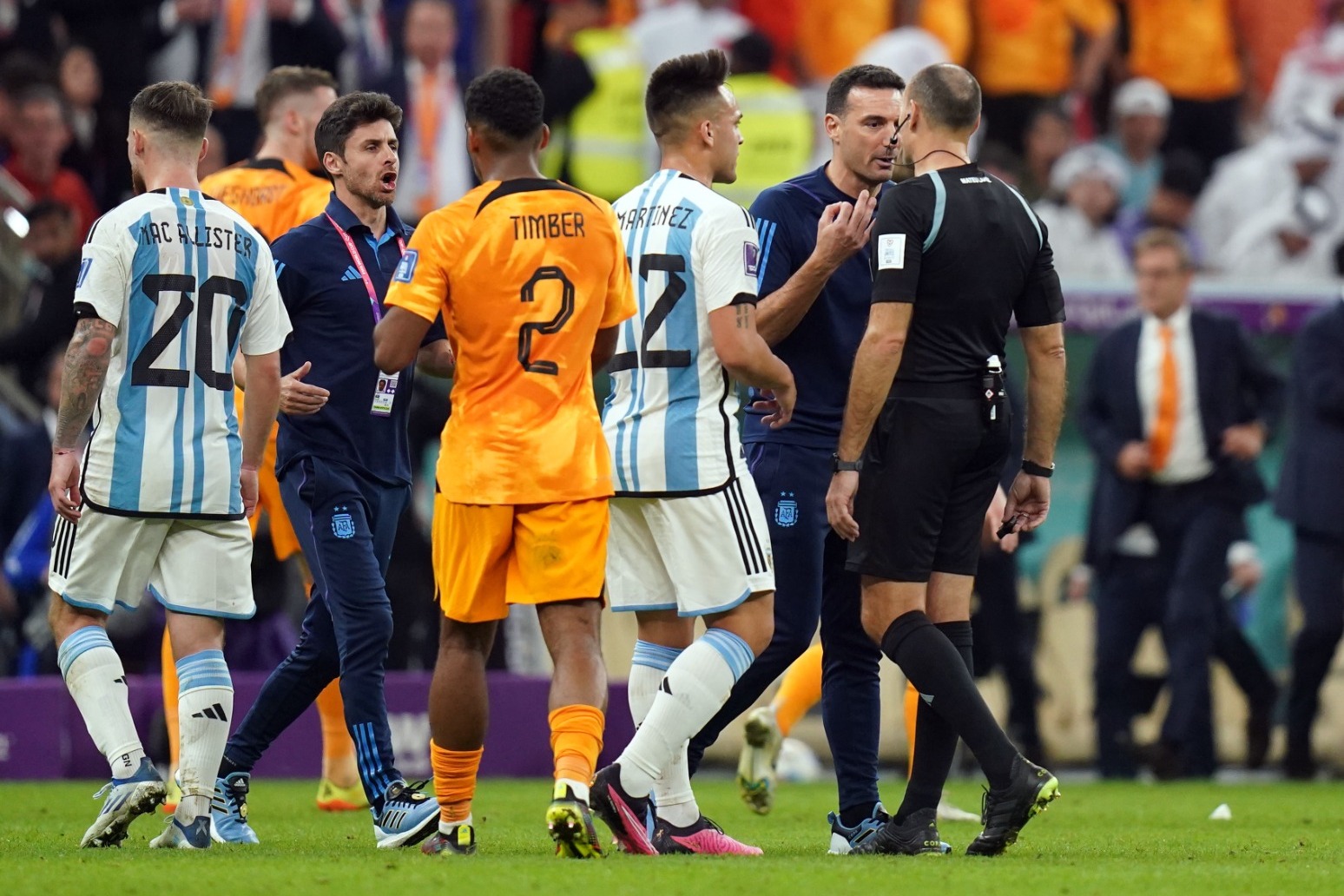 Argentina head coach Lionel Scaloni defended his team’s behaviour during the fiery quarter-final victory against the Netherlands as Lionel Messi and Co turn their attention to reaching the World Cup final.

La Albiceleste are two-time champions and take on 2018 finalists Croatia on Tuesday evening at Lusail Stadium, where the victor will return for Sunday’s final against France or Morocco.

Argentina were involved in arguably the game of the tournament so far at that venue in the quarter-finals, where the Dutch roared back to make it 2-2 deep into stoppage time and take the match to extra time.

Scaloni’s side eventually triumphed 4-3 on penalties and his players were quick to goad their opponents, with Messi and shoot-out hero Emiliano Martinez publicly taking aim at Netherlands boss Louis van Gaal.

Referee Antonio Mateu Lahoz dished out bookings aplenty, with FIFA announcing disciplinary proceedings against both federations for the misconduct of players and officials in the ill-tempered clash.

“The previous game was played the way we had to play it from both teams, the Netherlands and Argentina, and that’s football,” head coach Scaloni said.

“In football, sometimes you have to defend, attack and some games, you know, things can happen like the previous game.

“There can be arguments, more challenging times but that’s all. That’s why there is a referee to make justice.

“And we need to just put an end to this idea of, you know, thinking Argentina is just that and we usually have that sort of behaviour.

“We lost to Saudi Arabia, we didn’t say anything. We won the Copa America in Brazil and we experienced the most sporting behaviour with Messi, (Leonardo) Paredes and Neymar.

“They were all sitting together in that tunnel at that Maracana stadium, so I’m really not convinced of this idea of unsporting behaviour.

“We need to show our pride and we just played the game the way we had to play it.

“And then there is a referee in charge of making decisions. Things end in the moment the referee blows the final whistle.

“So, we respect all the teams, the Netherlands, Croatia now and all the opponents we face. That’s one of our main characteristics and features of our personality since the first game.

“We need to put an end to this idea of us not being good winners or losers – that’s very far from who we actually are as a team, as a squad and as the way we represent this nation.”

Argentina are comfortably the best supported team in Qatar, with their former defender Pablo Zabaleta saying it is “like being in Buenos Aires”.

The chance to see what is likely to be Messi’s last World Cup has led to many making the trip, with the 35-year-old set to make a record-equalling 25th appearance in the competition on Tuesday.

“He’s so eager, willing to keep playing football so we’re very happy about this.

“We’ll see whether he continues playing or not. We will keep enjoying him. That’s the most (important) thing we can do – that’s for us and the world of football.

“In case things turn out well, then everything will be good for us. We have our whole country supporting us. They’re backing us.

“But there’s still a long road to go. We need to play crucial matches. Tomorrow’s game will be a very tough one and we need to focus entirely on that.”

“For us, he’s our captain, our leader,” the left-back said. “He’s the one pushing us, motivating us. He’s the one who has that special advantage.

“When we are in the pitch, we know we have Messi and that is a great source of motivation and help because we all know that we can all contribute and give our best on the pitch.

“We are really happy to have Messi as our captain and with everyone’s support, with our squad, our players, the technical stuff, we try to work in the same direction and to achieve our dreams.

“That’s the most beautiful thing to do it with Messi by our side.”