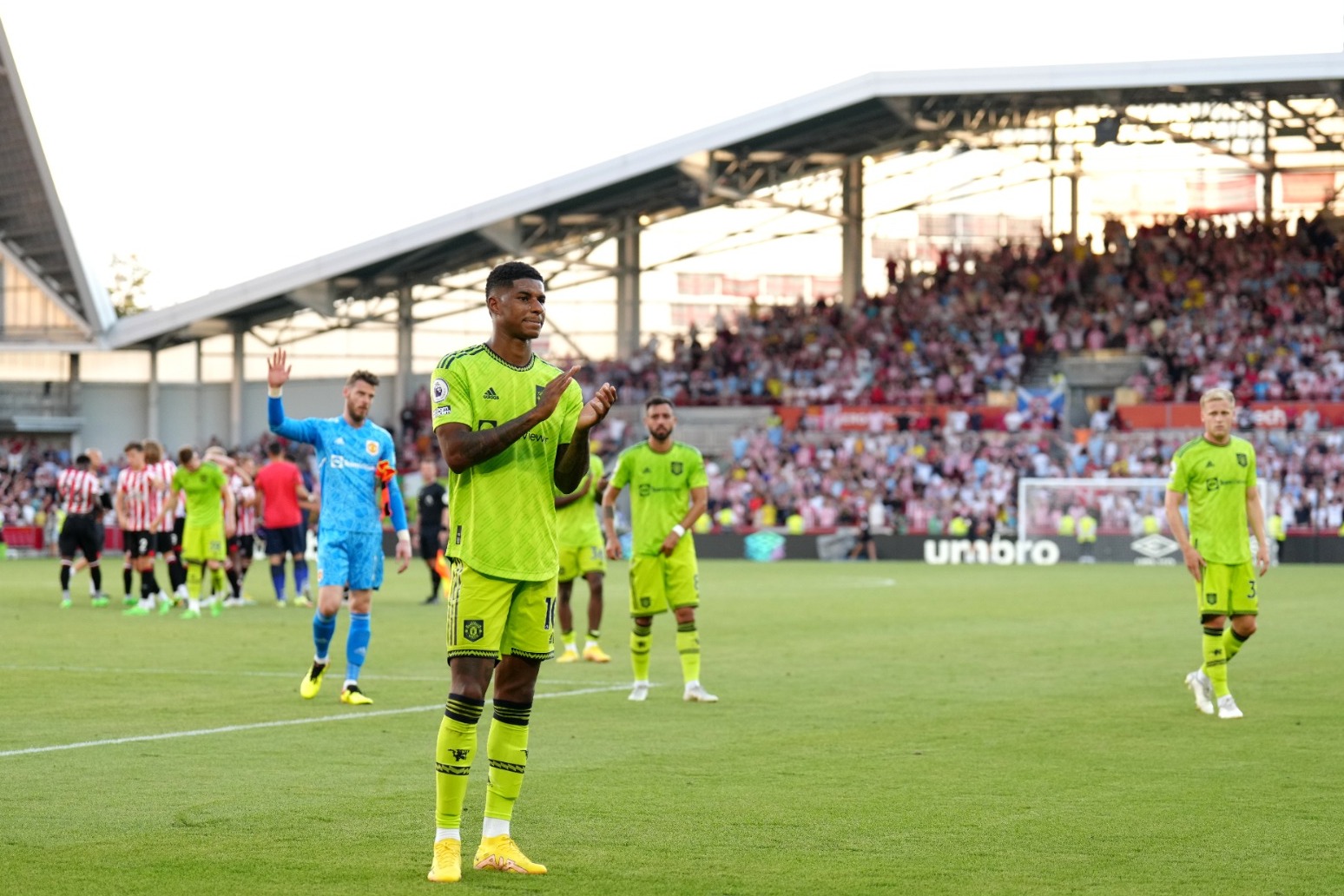 Manchester United plumbed new depths after a 4-0 capitulation at Brentford sent Erik ten Hag’s side into full-blown crisis mode after just two games of the season.

Through a mixture of catastrophic defensive ineptitude and Brentford opportunism, the Red Devils found themselves four down at half-time.

Goalkeeper David De Gea gifted the first two to Josh Dasilva and Mathias Jensen, Ben Mee helped himself to a third and Bryan Mbeumo hit a slick fourth on a chastening afternoon for the visitors.

New boss Ten Hag had insisted beforehand that he was not panicking despite United’s lack of new signings.

But the Dutchman will surely be scrambling for the button marked ‘P’ after this debacle.

Make no mistake, Brentford are a decent team. Arsenal, Liverpool and Chelsea all struggled to contain them at the Gtech Community Stadium last season.

But this was a humbling, embarrassing defeat almost entirely of United’s own making.

Ten Hag had turned to Cristiano Ronaldo to lead the attack, having started the wantaway Portugal star on the bench for last weekend’s defeat by Brighton.

But the problems are all at the other end, as United imploded after only 10 minutes thanks to the first mistake from De Gea.

The Spaniard allowed Dasilva’s weak long-range shot to squirm through his hands and roll into the net.

De Gea was at fault again eight minutes later, selling Christian Eriksen short as United attempted to play out from the back.

Jensen was alive to the unravelling situation in the United defence and nipped in to rob Eriksen and double the lead.

It was a sweet moment for the Bees fans, with Eriksen having spent the second half of last season with Brentford following his recovery from a cardiac arrest, only to opt for bigger and better things at United.

It certainly does not look like panning out that way for the Denmark international just yet.

With the temperature touching 35C in west London, the drinks break gave Ten Hag the chance to try to sort out the mess unfolding in front of him, while Bees boss Thomas Frank whipped out a tactics board.

Neither should have bothered, as United continued to shoot themselves in the foot and Brentford took full advantage.

On the half hour Mee, the summer signing from Burnley, bundled in a header at the far post after United failed to deal with a corner.

Five minutes later Ivan Toney was given the freedom of the pitch to race forward and tee up strike partner Mbeumo, who beat Luke Shaw before firing home.

With the heat undoubtedly a factor, United got some respite in the second half and Eriksen even managed a couple of attempts on goal, a header held by keeper David Raya and a volley skewed wide, both to loud cheers from the partying Brentford fans as United’s began filtering away.

Ten Hag could maybe take some consolation from the fact that the last United manager to lose his first away game in charge was Sir Alex Ferguson, a 2-0 defeat at Oxford, and he went on to do pretty well.

But even those dark days of the 1980s did not look as grim as things do for this current United side.