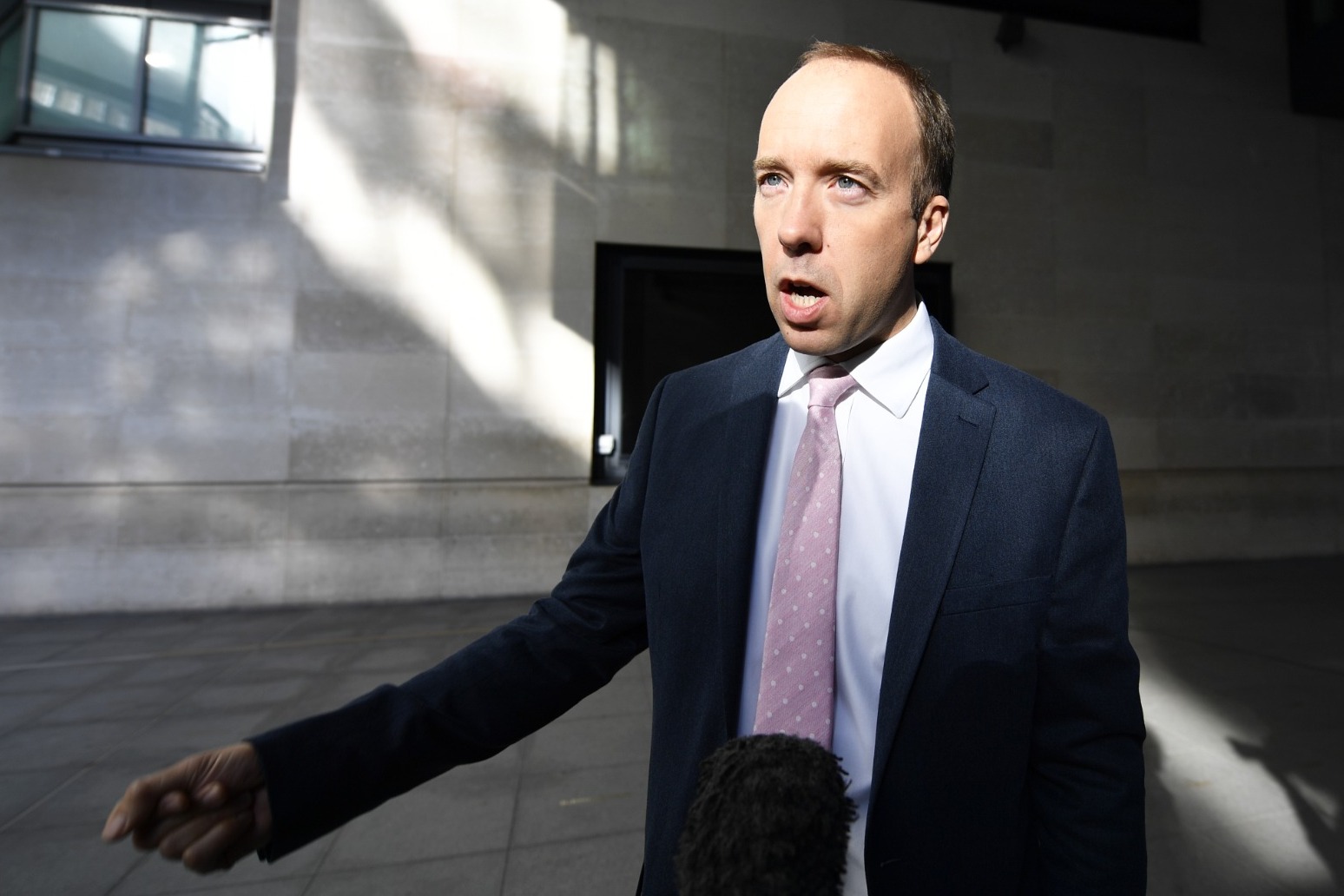 The public has voted for Matt Hancock to take on his fourth consecutive trial on I’m A Celebrity… Get Me Out Of Here! since arriving in the jungle on Wednesday with comedian Seann Walsh.

The former health secretary, 44, will face Who Wants To Look Silly On Air? alongside his 23-year-old campmate Owen Warner, who stars as Romeo Nightingale in Hollyoaks.

The quiz show-style Bushtucker trial is based on the game show Who Wants To Be A Millionaire?.

After delivering the news during Friday’s show, co-host Ant McPartlin said “we’ll see all of you at the trial clearing because you can come and watch today”, which was met by cheers from the campmates.

Earlier in the episode, the West Suffolk MP ate part of a camel’s penis, sheep’s vagina and cow’s anus in the first eating trial of the series alongside Culture Club’s Boy George.

The public voted for the pair to take part in La Cucaracha Cafe (The Cockroach Cafe) in which they brought back 11 stars for camp.

Sitting opposite each other at the Mexican-themed restaurant while a Mariachi band played, Hancock first faced a fish-eye taco which he said tasted “very fishy” while Boy George ate sticky beans.

Hancock had to drink an entire glass of blended meal worms accompanied with a witchetty grub garnish – which he described as “absolutely disgusting”, branding the texture “horrible”.

Meanwhile, Boy George, who is being allowed to eat vegetarian options during the tasks, compared eating a fermented duck egg to his fellow campmate Coronation Street star Sue Cleaver’s fart – which was “like charcoal”.

The Tory MP said eating the tip of a camel’s penis was “soft and crunchy” and described the thought of eating a sheep’s vagina as “disgusting”.

After being served a cow’s anus, he added: “The texture’s terrible and all the time you’re thinking about what you’re eating. I don’t recommend it as a main course.”

McPartlin joked: “We’ll take it off the menu, thank you for that.”

Musician Boy George also gagged loudly as he tackled a plate of fermented plums, adding: “It tastes like perfume.”

For the final star, Hancock had to eat cockroaches and blended cockroach dip, while Boy George faced blended and fermented seaweed – earning the pair a full house of stars.

After the challenge, Hancock was questioned by his campmates about breaking coronavirus social distancing rules during the pandemic by having an affair in his ministerial office with aide Gina Coladangelo.

Hancock, who resigned as health secretary in June 2021, said: “It was a mistake, because I fell in love with somebody. That’s why I apologised for it.”

TV presenter and property expert Scarlette Douglas said: “It’s that kind of, you just do it and then afterwards it’s like, ‘Oh I’m sorry, I’m sorry’.”

Hancock replied: “No, because it’s bigger than that.”

Loose Women star Charlene White said: “It’s massively bigger than that. My aunt died from Covid in the first wave.

“So, we couldn’t go to the hospital to go and visit her. I had to sit by myself in the church at her funeral. We couldn’t hug each other because we were following guidance.

“And I get that you fell in love, I understand all of those things, but sorry for a lot of families like mine doesn’t really cut it.”

Hancock replied: “Yeah. Well, there you go. That’s one of the reasons that I regret it as much as I do.”

Douglas said: “I nearly cried then.”

Hancock replied: “So did I. We all make mistakes. I made a pretty big one.”

The exchange prompted both White and Cleaver to give him a hug, to which the actress added: “That took balls Matt to say that.”

Hancock later told the Bush Telegraph that his campmates asked questions that the public have got and “it’s only respectful to just give completely straight and truthful answers”.

He added: “I wasn’t really expecting it, but it did get very emotional.”

The MP joined the cast of I’m A Celebrity… Get Me Out Of Here! on Wednesday after facing much criticism over his decision from the public and fellow politicians.

I’m A Celebrity… Get Me Out Of Here! continues on ITV on Saturday at 9pm.