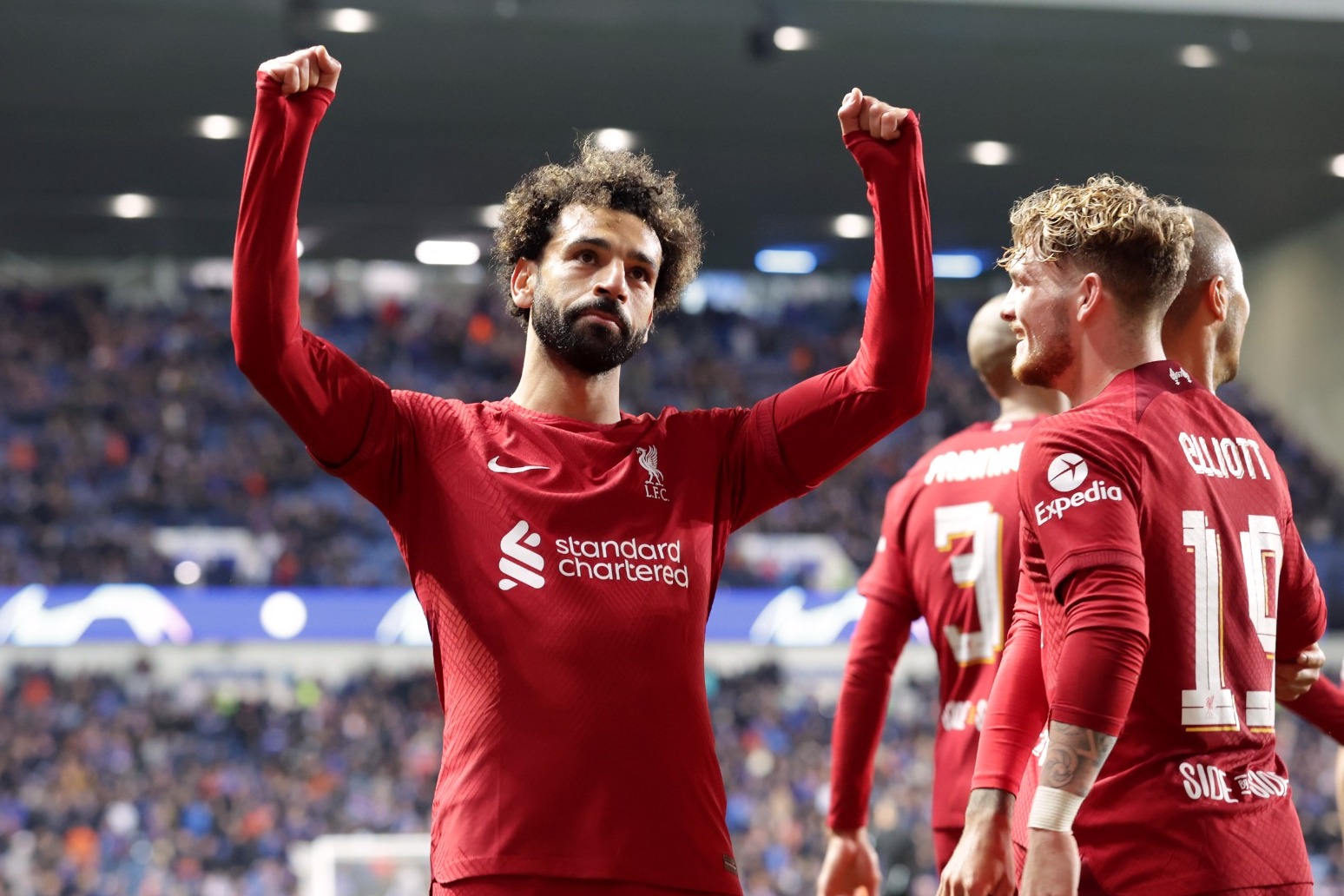 Jurgen Klopp’s side had cantered to a 2-0 win over a tentative Gers side at Anfield last Tuesday but there was initially more fight about the Gers this time and they took the lead in the 17th minute with a Scott Arfield drive.

Last season’s finalists responded seven minutes later when Brazilian attacker Roberto Firmino headed in from a corner before grabbing a second in the 55th minute as the visitors’ superior quality came to the fore.

Striker Darwin Nunez added a third with a fine finish in the 66th minute before Salah grabbed three goals in six minutes and 12 seconds with Harvey Elliott notching as Giovanni van Bronckhorst’s side crumbled.

It was not so much a Battle of Britain as a massacre and the Govan side remain rooted at the bottom of Group A without a point.

Liverpool are six points clear of Ajax and three behind leaders Napoli with two fixtures remaining.

It was hoped by those of a Rangers persuasion that Ibrox could help fuel a much-needed positive result in their first Champions League campaign in 12 years and they were encouraged by Liverpool’s injury woes.

Luis Diaz, Joel Matip and Trent Alexander-Arnold were added to the list following Sunday’s 3-2 loss to Arsenal, while Salah was dropped to the bench, along with Thiago and Diogo Jota, although the Egyptian would take the headlines later.

Gers winger Ryan Kent took over from Rabbi Matondo on the left while Gers top scorer Antonio Colak was preferred to Alfredo Morelos, who started at Anfield.

The scene was set and it was the home side who drew first blood.

Skipper James Tavernier initially won possession in the Reds’ half and when Colak picked up the ball and laid it off to midfielder Ryan Jack he stroked it into the path of Arfield who drove low past Alisson Becker from the edge of the box to send Ibrox into raptures.

Minutes later, Gomez’s pass back to Alisson was too short but Colak could not get the ball under control and the chance was lost.

Smarting Liverpool increased the tempo and drew level when Firmino beat Tavernier to Kostas Tsimikas’s corner from the right to head in at the near post.

Back came Rangers and in the 41st minute Arfield’s shot from eight yards, from a Fashion Sakala cut-back, was blocked by Konate and Elliott completed the clearance.

The Govan side then suffered a huge blow when centre-back Connor Goldson picked up an injury tackling Nunez and had to be replaced by 18-year-old Leon King.

Liverpool came roaring out the traps for the start of the second half and Rangers wobbled before finding their feet again.

The speed of Liverpool on the break, however posed problems for the home side and when Gomez galloped up the right flank, leaving Kent in his wake, he crossed for Firmino to sweep the ball through Allan McGregor’ legs from eight yards.

In an instant, it looked too much of a task for Rangers and Liverpool swept forward time and again.

Jack limped off to be replaced by veteran Steven Davis but belief seemed to have deserted Van Bronckhorst’s side and it drained away further when Firmino casually flicked the ball to Nunez who steered the ball past McGregor from just inside the box.

McGregor saved from Salah, who had come on along with Thiago and Scotland skipper Andy Robertson – he was booed due to his Celtic allegiances – with Jota coming on soon afterwards.

Salah then took over.

He poked in the fourth in the 76th minute from an acute angle, then, as the Gers defence disintegrated, twice fired in from the edge of the box within minutes to take the match ball and it became even worse as Elliott knocked in a seventh, confirmed by a VAR check.