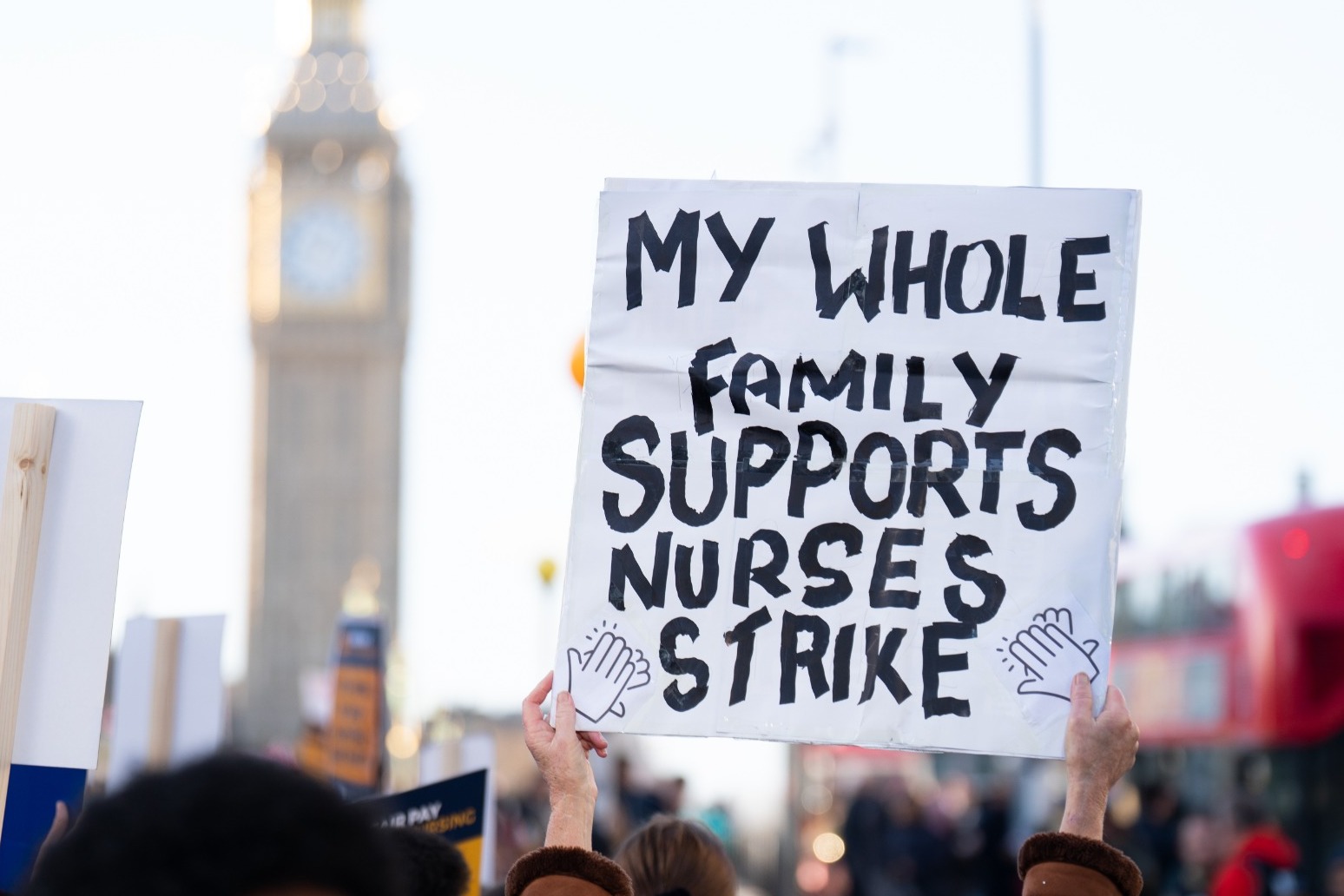 NHS leaders cannot keep patients safe during strikes and there is “deep worry”, health chiefs have warned, as they urged the Prime Minister to reopen talks on pay.

In a last-minute intervention, Matthew Taylor, chief executive of the NHS Confederation which represents most NHS organisations, has written to Rishi Sunak requesting an end to the deadlock with unions who are striking over pay and conditions.

Thousands of nurses staged their second walkout over pay on Tuesday and paramedics and ambulance workers are getting ready to hold a strike on Wednesday.

In a letter to the PM, Mr Taylor said: “This is not something NHS leaders would ever say lightly, but many now tell us that they cannot guarantee patient safety tomorrow.

“On health grounds alone, it is clear we have entered dangerous territory.”

Mr Taylor urged the Prime Minister to end the Government’s dispute with the unions quickly, asking Mr Sunak to “be prepared to negotiate on the substantive issue of pay awards”.

The letter added: “With less than 24 hours to go to the ambulance strike, there is now deep worry among NHS leaders about the level of harm and risk that could occur to patients tomorrow and beyond.”

He added that it is rare to hear “such strong and urgent expressions of concern” from leaders running hospitals, ambulance services and other vital health services.

Speaking to BBC Radio 4’s World At One programme, Mr Taylor said: “We never want to alarm people but we have reached the stage where our leaders feel it’s necessary to say they cannot guarantee patient safety, they cannot avoid risks as these strikes unfold.

“We need to make clear that we’re entering into a very dangerous time and this is why we’re upping even more our call to the Government and to the trade unions to try to find a way of solving this dispute and helping us get through the winter.”

“It’s simply our responsibility to make that absolutely clear to the public, to the politicians and to the trade unions.”

Unions representing ambulance workers met Health Secretary Steve Barclay though the Government has indicated it will not shift on the issue of pay.

Following the talks Unite’s Onay Kasab said: “The Government have got to engage on pay because these strikes will escalate otherwise, that is the reality.

“Our members are absolutely determined to win not just the pay battle but to win the battle to save the NHS.”

Earlier, Downing Street acknowledged that Mr Sunak had not chaired Cobra meetings on the crisis or met the unions.

At a Cabinet meeting on Tuesday the disputes with NHS nurses and paramedics were not raised, with discussions instead focusing on plans for the Coronation in May 2023.

“But the fundamental approach of the Government has been to accept the recommendations of the independent pay review bodies, we don’t think it would be right to add the political element that having the Prime Minister directly involved would have.”

Elsewhere, Rachel Harrison, a national secretary at the GMB trade union, told MPs on the Health Committee that unless the Health Secretary is willing to talk about pay, ambulance strikes will go ahead.

Asked what will happen if the Government does not move on pay, she said: “Our members will be the ones that will decide… We will continue to say to the Government, ‘our door is open to talk about pay’.

“Our members will be the ones to decide on any pay offer that’s made and if no pay offer is forthcoming, we will continue to have that conversation next year as we head towards the next round of pay discussions as well.”

Ambulance responses are split into categories, with category one being the most life-threatening such as cardiac arrest, while category two covers conditions like stroke, heart attack and sepsis.

Ms Harrison said category one would be covered by workers and suggested agreement has been reached in most areas on other categories.

She said: “Most agreements have now been signed off and we’re doing our role in communicating to our members what they are and encouraging them to adhere to the exemptions that have been put in place.”

Ms Harrison said that cover will vary by service, but she added: “We will do everything within our power to ensure that communities are safe during this action.

“The Government has to play their part, they have to come to the table and talk to us.”

“The unions have agreed to provide cover tomorrow for life-threatening emergencies (category one cases) and serious cases like heart attack and stroke (Category 2 cases).

“That has been agreed at a host of local NHS trusts.

“Frankly, at best, the Government is misleading the public on this, and at worst deliberately scaremongering.”

The North East Ambulance Service said staff would cover category two calls “and calls assessed by a clinician and deemed to be at risk of life and limb”.

It said talks were ongoing and further announcements would be made.

It also said half of control room staff have been exempted from industrial action by the union, while patient transport staff will be exempted to convey people to appointments for dialysis and chemotherapy.