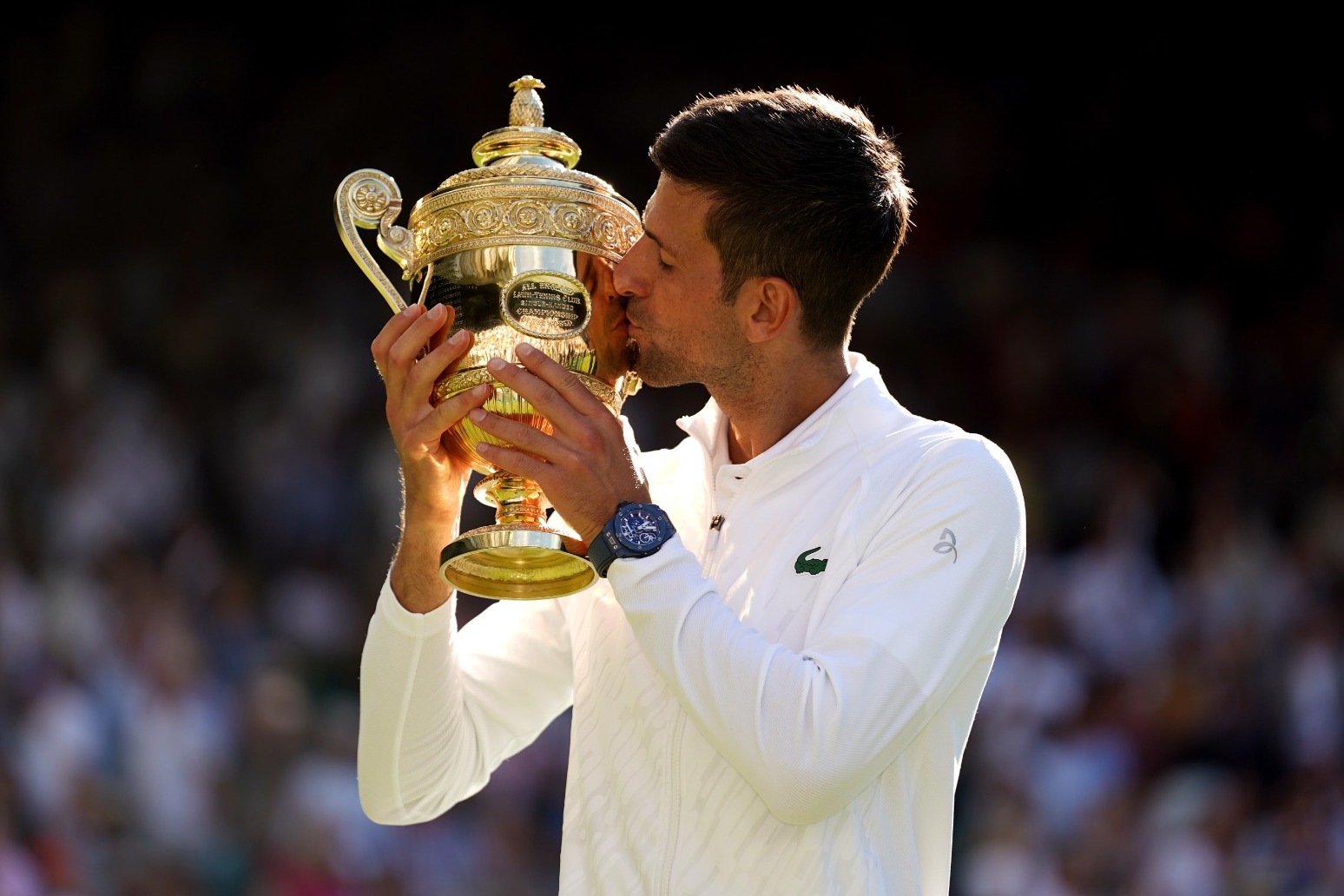 The Serbian has now won seven of the last 11 titles at the All England Club, equalling Pete Sampras’ tally and closing to within one of both Roger Federer’s men’s singles record here and Rafael Nadal’s overall mark.

It has been a difficult season for Djokovic but he has once again been able to rely on the lawns of Centre Court to bring the best out of him, and he raised his arms aloft after securing a 4-6 6-3 6-4 7-6 (3) victory.

Much of the excitement for the match centred on how Kyrgios would both perform and behave in his first major singles final.

The 27-year-old was immaculate on both counts for a set but began increasingly to lose his cool as the scoreboard turned in Djokovic’s favour, earning a warning for swearing while also constantly berating his box.

If Kyrgios has often given the impression throughout his career that he does not really care about tennis, there can be no pretence in a Wimbledon final.

Having found a taste for grand slam silverware by winning the Australian Open doubles title, here he was trying to live up to his words that he has got the tennis to beat the world’s best on the biggest stage.

None of those players had the sort of rollercoaster ride on and off the court that Kyrgios has had this fortnight, including finding out that he is facing a charge of assaulting his former girlfriend, and it was difficult to know which version of the combustible Australian would walk out on to Centre Court.

He had been largely well behaved since his explosive third-round win over Stefanos Tsitsipas and maintained that in a sublime first set.

His first service game featured a 125 miles per hour second serve ace and an underarm serve but mostly Kyrgios wowed with the quality of his play, breaking Djokovic in the fifth game and clinching the set with his seventh ace.

Winning a set against Djokovic has not meant much at Wimbledon this year, though, and the top seed did what he does best, finding a metronomic rhythm both on return and from the baseline and gradually wearing his opponent down.

He broke the Kyrgios serve for the first time in their three meetings to lead 3-1, and the Australian began to channel his stress into ranting at his support box.

The Duke and Duchess of Cambridge may have been shifting a little more uncomfortably in their plush Royal Box seats, with Prince George sat within earshot.

Kyrgios had the majority of the crowd support, and he whipped them up with a leaping pump of the fist when he chased down a drop shot at 3-5 that helped him create four break points, but he could not take any of them.

Djokovic was now reading the Kyrgios serve incredibly well and the pressure on the challenger was growing all the time.

An eventful fifth game of the third set saw Kyrgios win a point with a tweener, receive a code violation for swearing after a spectator called out before his second serve and then implore umpire Renaud Liechtenstein to have the woman “who looks like she’s had about 700 drinks bro” ejected.

He was doing remarkably well to hold on to his serve but the dam burst in the ninth game when, from 40-0, Djokovic won five successive points to leave himself serving for the set.

Kyrgios screamed at his box and then slammed his water bottle down in frustration.

A lengthy bathroom break for Djokovic allowed Kyrgios to cool the fires, and he did well to hold serve throughout the fourth set, but a one-sided tie-break proved the end of his hopes.