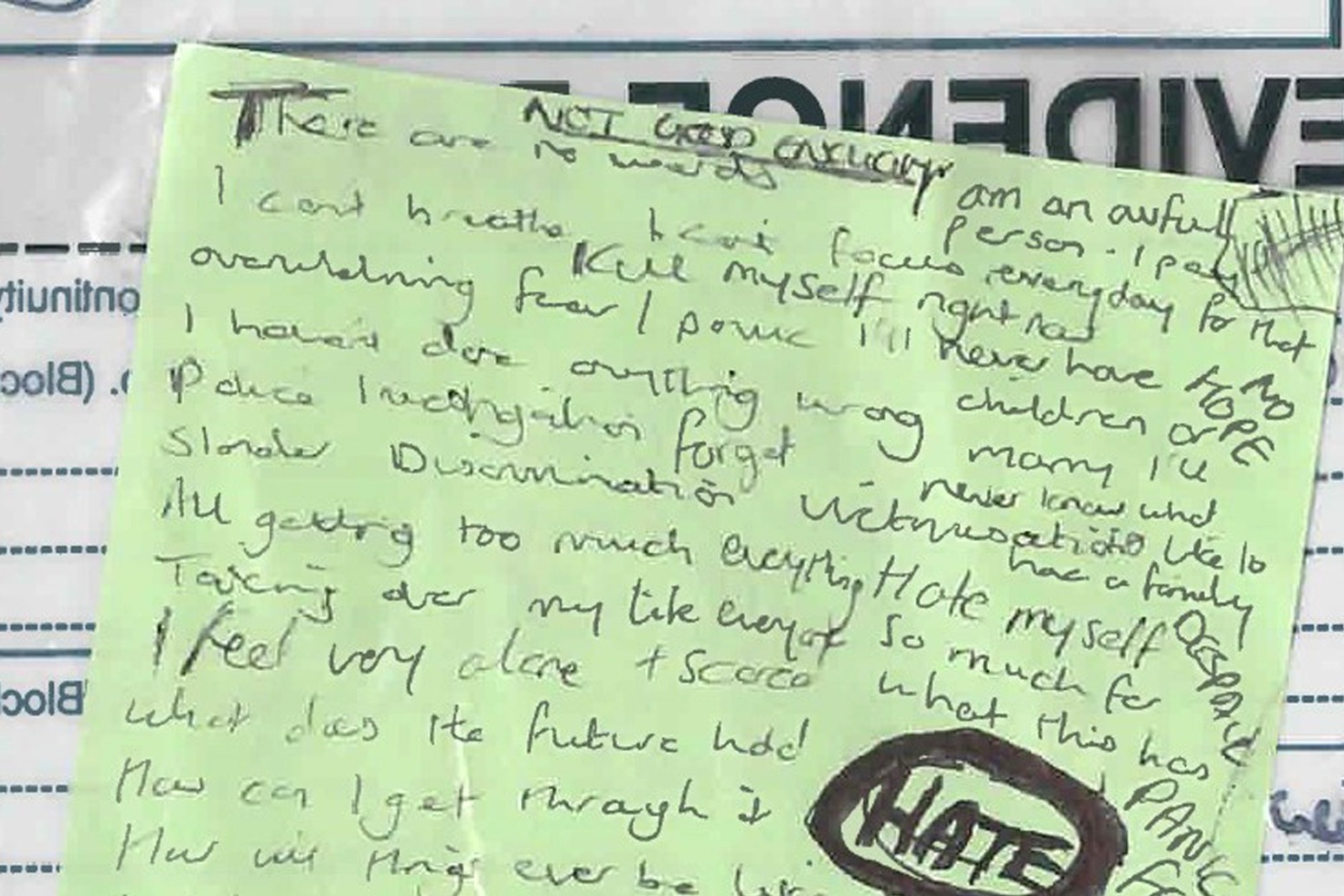 A nurse accused of murdering seven babies and trying to kill 10 more wrote “I am evil I did this” in capital letters on a piece of paper found after a police search of her house, a court has heard.

Lucy Letby also wrote “I don’t deserve to live. I killed them on purpose because I’m not good enough to care for them. I am a horrible evil person,” Manchester Crown Court was told.

The notes were among other papers and Post-it notes which also contained “many protestations of innocence”, Nick Johnson KC, prosecuting, told the jury.

Letby, 32, denies attacking newborn children in a variety of ways, including poisoning, during an alleged killing spree on the neonatal unit at Countess of Chester Hospital between June 2015 and June 2016.

Concluding the prosecution opening, which began on Monday, Mr Johnson said that after Letby fell under suspicion, she was put on clerical duties where she could not pose a danger to children until she was arrested in July 2018.

After her house on Westbourne Road in Chester was searched, “interesting items” were found, Mr Johnson said.

Paperwork relating to many of the children who died or suffered collapses was found along with Post-it notes with closely written words which included the names of some of her colleagues, the court heard.

“But I want to show you one note in particular,” Mr Johnson told jurors.

Highlighting a green Post-it note shown on TV screens to the jury, he focused on some of the words written in ink by Letby.

Mr Johnson said: “She wrote, ‘I don’t deserve to live. I killed them on purpose because I’m not good enough to care for them’, ‘I am a horrible evil person” and in capital letters ‘I am evil I did this.’

Mr Johnson added: “Well, ladies and gentlemen, that in a nutshell is your task in this case. Whether or not she did these dreadful things is the decision you will have to make when you have heard all the evidence.”

Along with the ‘I am evil…’ note, there were other written notes, the jury heard.

Mr Johnson said these included phrases such as “Why/how has this happened – what process has led to this current situation. What allegations have been made and by who?” and “Do they have written evidence to support their comments?”

The prosecutor said that in her writings Letby expressed frustration because she was not being allowed back on the neonatal unit and wrote: “I haven’t done anything wrong and they have no evidence so why have I had to hide away?”

Mr Johnson added: “Her notes also expressed concern for the long-term effects of what she feared was being alleged against her and there are many protestations of innocence.”

Ben Myers KC, representing Letby, gave a short introduction to her defence case and told jurors anyone who approached the matter “as some kind of done deal has got this very badly wrong”.

The barrister, pointing to Letby sitting in the dock, told jurors: “It is important to be careful that blame is not heaped on that woman when there may be others who have made mistakes or a system which has failed.”

In some cases, the defence say, no-one could say why a particular child deteriorated or died.

Explaining the Post-it note, he said: “This is the anguished outpouring of a young woman in fear and despair when she realises the enormity of what’s being said about her, in the moment, to herself.”

Mr Myers said at the time it was written she was dealing with employment issues, including a grievance procedure with the NHS trust.

He went on: “This whole case is complicated.

“Sat in that dock is a young woman who says this is not her fault, so we need to look at the evidence.”

The trial, scheduled to last six months, began on Monday and the jury has now heard in outline the seven murder and 10 attempted murder allegations.

These include allegations Letby attacked newborn babies using a variety of methods, including by insulin poisoning and injecting infants with air, causing them to stop breathing.

Most of the babies were born premature, some just a day old when they were allegedly attacked.

Jurors also heard Letby sent a sympathy card to the parents of a baby she allegedly murdered at the fourth attempt and was allegedly interrupted in the act of attacking children by unsuspecting parents and medics.

Some of the parents of the children involved have sat through the trial opening, just across from Letby’s own parents in the public gallery.

The defendant in the dock has sat throughout, listening passively to the prosecutor, with a file of papers on her lap.

A court order prohibits reporting of the identities of surviving and deceased children allegedly attacked by Letby, and prohibits identifying parents or witnesses connected with the children.

Letby, originally from Hereford, denies all the allegations.