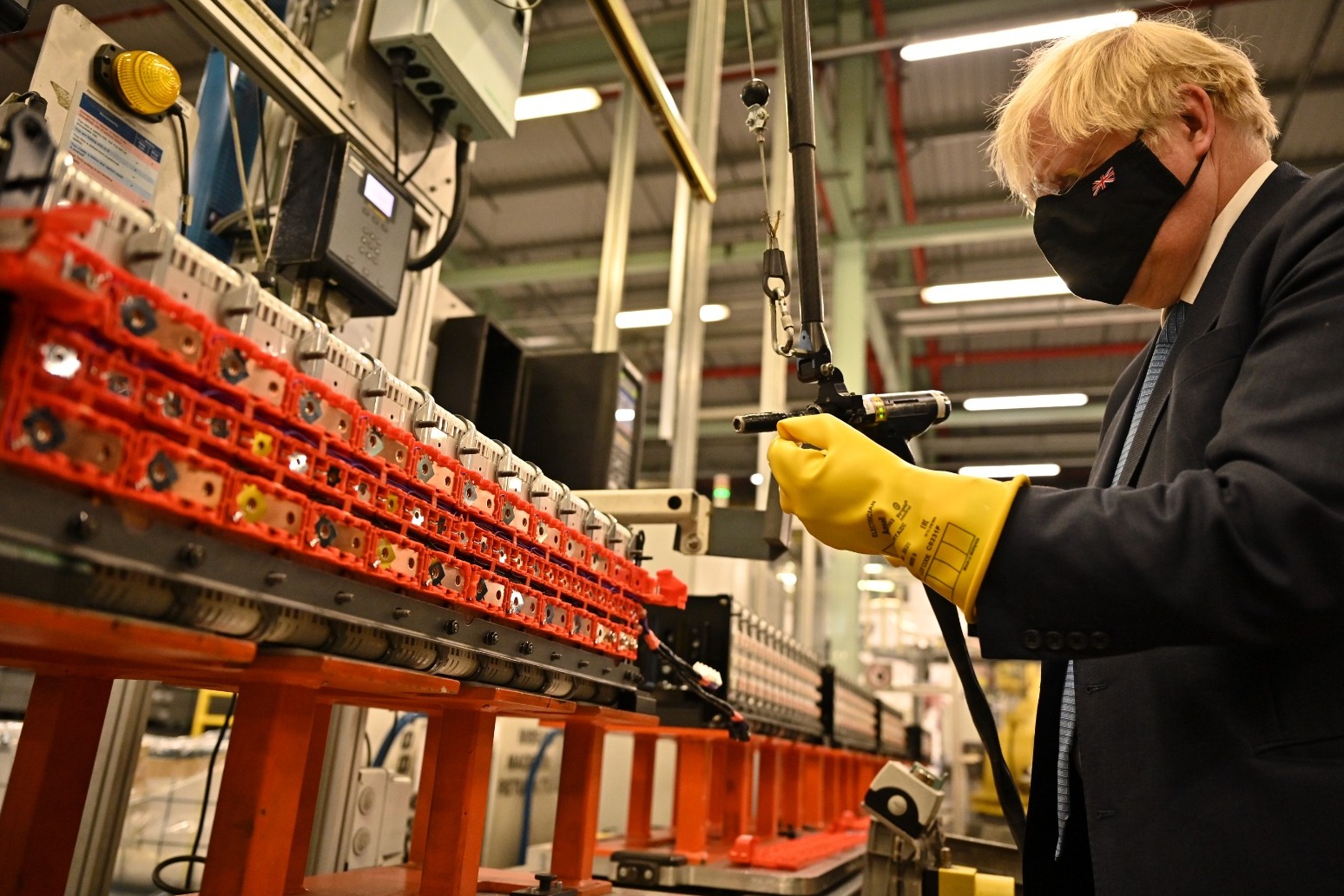 While the Queen showed off her green credentials on Thursday, arriving for a royal visit in a hybrid car, the Prime Minister has admitted he is still reliant on vehicles powered by fossil fuels.

During a tour of a Nissan car factory in Sunderland – to promote the launch of a new electric model and huge battery plant – Boris Johnson said he is driven around in a “variety of machines” which are still run on “hydrocarbons”.

He did add he is aiming to phase them out as “conveniently and economically” as possible.

Mr Johnson told reporters: “I, at the moment, am driven in a variety of machines most of which are still run on hydrocarbons but I can tell you we will be phasing it out as soon as we conveniently and economically can.”

His comments came as 98 miles away, the Queen and Princess Royal arrived at the Edinburgh Climate Change Institute in an electric hybrid Range Rover.

During a tour around the facilities, the Queen was heard remarking that the effect of fossil fuels on the world means “we are going to have to change the way we do things really, in the end”.

Despite admitting he doesn’t drive a green car yet, both the Queen and Mr Johnson’s moves towards renewable energies signal an active change for the future of how we will drive around in the future.

The Prime Minister’s appearance was for the launch of a new “gigafactory” – a space where batteries for cars are made in a low-carbon facility – by Japanese car giant, Nissan, which is partnering with global battery technology company, Envision AESC.

The term was originally coined by Tesla founder Elon Musk, who named his new factory in 2014 a “gigafactory” as it was created to produce batteries with gigawatt-hours of storage capacity.

The opening of the new gigafactory in Sunderland is part of the Government’s plans for Britain to move into a greener future.

Last November, Mr Johnson announced that from 2030, new cars and vans powered wholly by petrol and diesel will not be sold in the UK as part of a 10-point plan for a “Green Industrial Revolution”.

Other points in the plan include trying to make walking and cycling “more attractive” to people and encouraging car manufacturing bases to produce electric vehicles.

But climate campaigners have said if Mr Johnson wants to encourage Britons to start thinking in a more eco-friendly manner with their travel, he has to lead the way.

Head of policy for Friends of the Earth, Mike Childs, said: “The PM has grasped the nettle on the need for the UK to lead on shifting from fossil fuel powered cars to electric by setting a 2030 phase-out target and encouraging industry investment.

“But he needs to follow through and lead by example. He is very well placed to demand that all government vehicles are electric so he should practise what he preaches.”