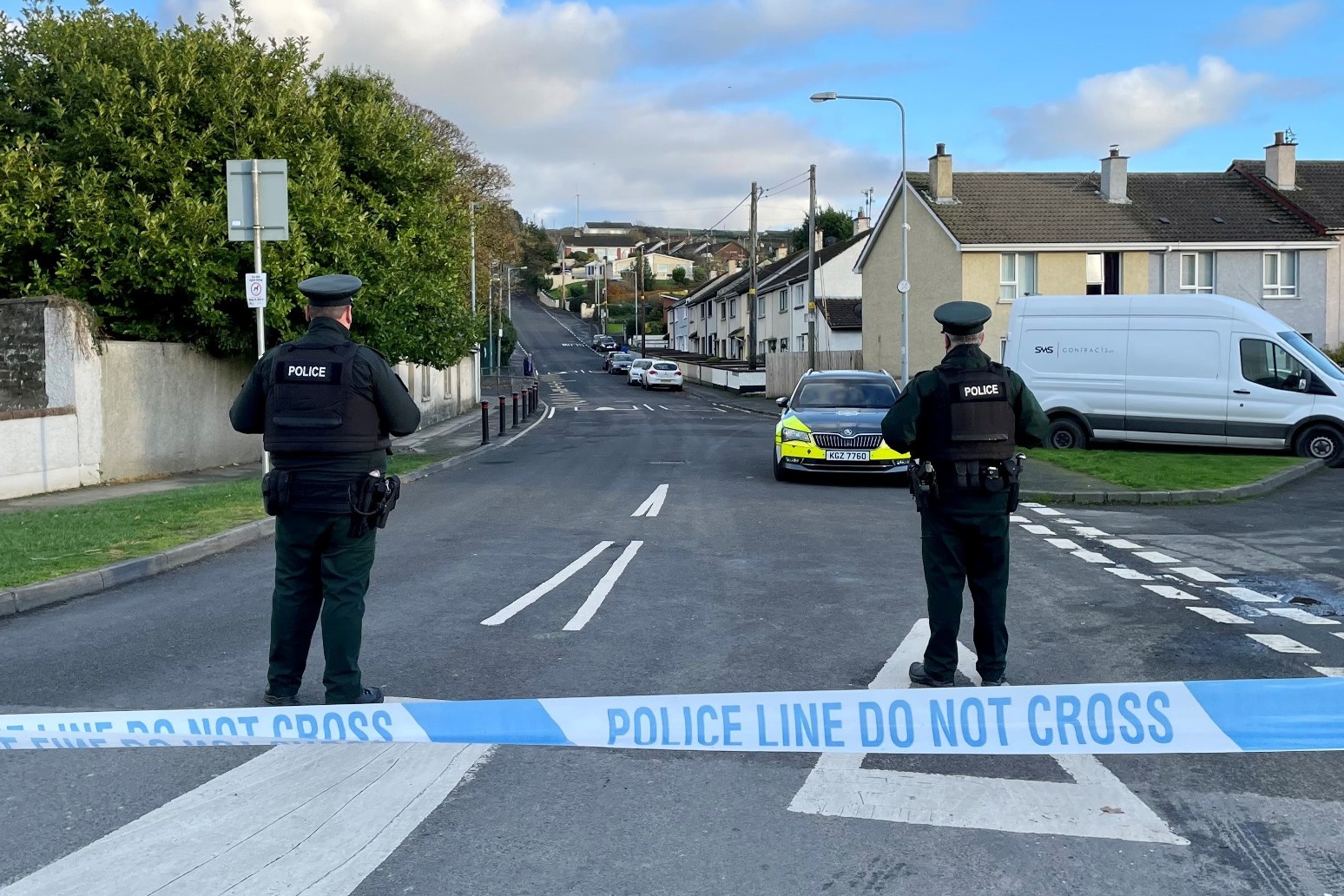 Police are investigating whether the New IRA was responsible for the attempted murder of two officers on patrol in Co Tyrone.

PSNI assistant chief constable Bobby Singleton said the location of the incident on Thursday in Strabane and previous attacks made the involvement of the dissident republican splinter group a “strong line of inquiry”.

Two officers escaped injury in the attack at Mount Carmel Heights after a bomb detonated at the side of their vehicle.

Police have said they have discovered what could be a command wire for the improvised explosive device during follow-up searches.

A major security alert is continuing in the area, affecting more than 1,000 residents and leaving some children unable to get to school.

Providing an update on the investigation, Mr Singleton said: “Shortly before 11pm last night two of the officers from the Strabane response local policing team were on duty in the Mount Carmel Heights area, they were conducting routine patrols in relation to ongoing antisocial behaviour in the area when they observed a flash and heard a loud bang.

“They left the area, came back to the station and they found evidence of some blast damage to their police vehicle.

“They later returned to the scene in a controlled fashion and established what they believe to have been the location of an explosion.

“We then moved into a security operation in the Mount Carmel Heights area.

“We have somewhere in the region of 1,000 residents who have been affected by that security alert.

“Our thoughts are first and foremost with the two police officers who were here last night serving their community.

“Fortunately they are left simply shaken by what happened last night, but we are treating this incident as a credible attempt to murder those officers.”

He said: “We have seen evidence of what we believe is a viable explosive device.

“Fortunately the officers have not been injured in this attack but this attack took place in a busy residential area, it was absolutely reckless and any member of the public, never mind our police officers, could have been seriously injured.”

Asked who could be responsible, the officer said: “Given the location of the attack and previous incidents, a strong line of inquiry would be the New IRA.”

She tweeted: “Those involved in this attack will not succeed in dragging society backwards.

“We must all unite against these reckless actions. We must keep building the peace and moving forward.”

“My thoughts first and foremost are with the officers affected, their loved ones and PSNI colleagues as they come to terms with has happened.

“Attempts on the life of police officers were wrong in the past and remain wrong today. There is always an alternative to violence.

“Northern Ireland will not be held to ransom by fringe elements intent only on bloodshed and dragging our society backwards.

“It is clear from the scenes this morning that those responsible for such cowardly acts offer nothing but hurt and disruption for the communities they purport to represent.

“Political leadership is needed to send a strong message that this behaviour has no place in our society.’’

Taosieach Micheal Martin was in Newry, Co Down, when news of the attack began to emerge.

He said: “I have just been hearing news overnight and we do need further clarity in terms of what happened here and I understand an investigation is under way.

“But any such attempt to injure members of the security forces or the PSNI would be absolutely shocking and stands to be condemned.

“It is quite shocking, if that is the case, that something like that would happen.”

The PFNI said the attack in Strabane was a “desperate, reckless act to murder officers working for the entire community”.

PFNI chair Liam Kelly said: “The terrorist goal was to cause heartache and misery and return Northern Ireland to the dark ages.

“We are grateful that officers in the vehicle targeted by these cowards were unhurt.

“The attackers wanted their roadside device to cause maximum damage and we are thankful they failed in their objective.

“Nothing is gained by such a callous, hate-filled incident. The terrorist threat is rated ‘substantial’ and I would appeal to all officers to step up their vigilance.

“This attack is a reminder to us all that terrorists are still active in our community.”