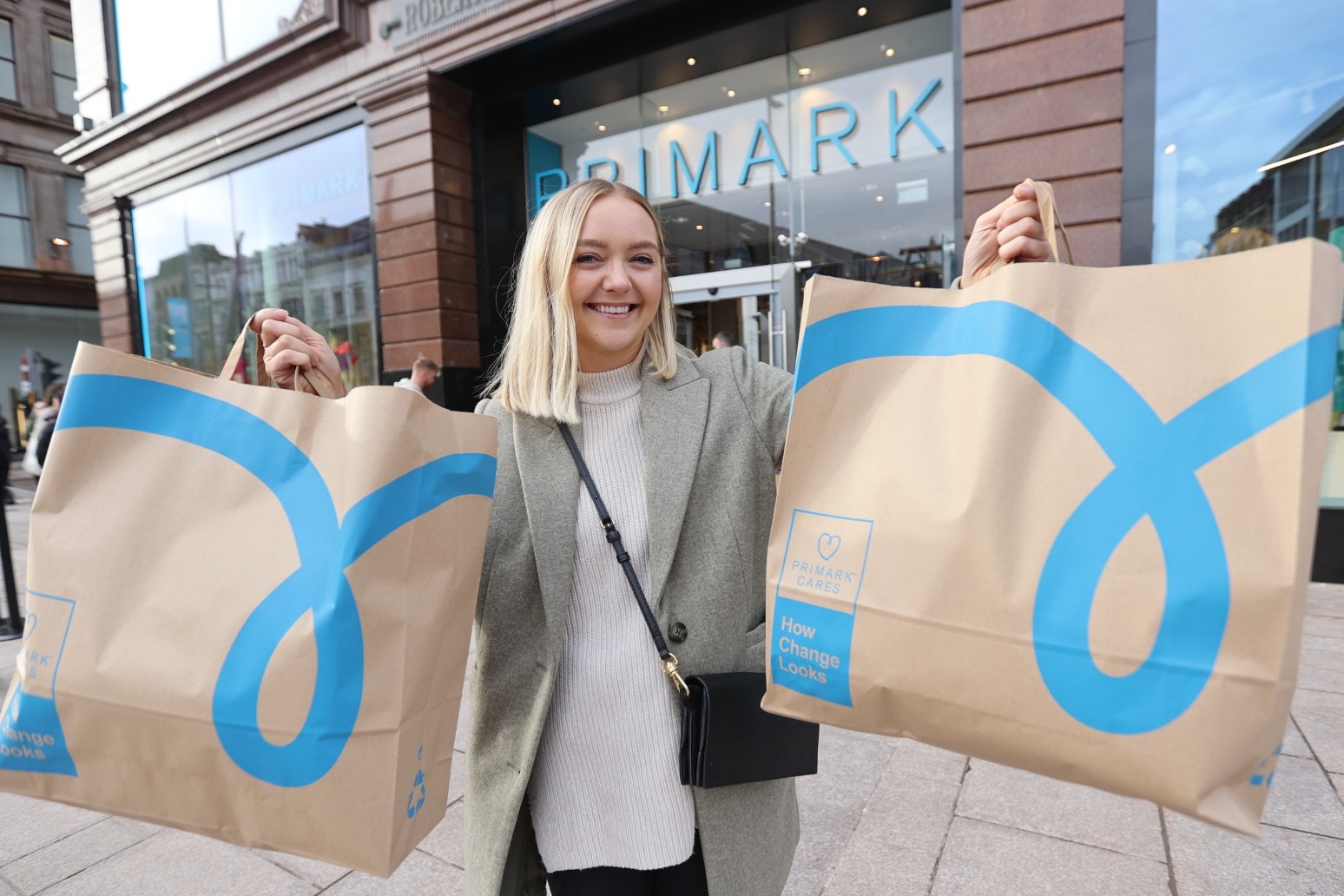 Primark staff formed a raucous guard of honour as they welcomed eager shoppers back to their Belfast store four years after a devastating fire gutted the historic building.

Bargain-hunters began queuing outside the landmark Bank Buildings in the city centre in the early hours of Tuesday ahead of the long-awaited reopening of the retail institution that was destroyed in the 2018 blaze.

A party atmosphere greeted them as the doors opened shortly before 10am following a restoration that took four years and £100 million to return the listed building its former glory.

Samuel Hamilton, from Belfast, was first in the queue and drove between the flag-waving lines of shop assistants on his mobility scooter.

“When it was burnt down, I was depressed. I missed going in and looking around it, and the staff were always nice and polite.”

Young sisters Jane and Brianna Robertson were also among the first shoppers to step inside the revamped store.

The siblings got up at 4am and made the hour-long journey from Magherafelt with their parents.

Jane told the PA news agency: “We wanted to come down for the atmosphere and the clothes and the all new stuff, like the Disney cafe and the nail bar. We are going to look for make-up, nails and new clothes.”

Store manager Elizabeth McCalmont, who has worked for Primark for almost 30 years, said she had dreamed of the day the store would reopen.

“Four years ago we were all devastated by the fire and it has been my dream since then to see this day come,” she said.

“The excitement has definitely been felt here this morning.

“Primark has been at the heart of Belfast community for many years and I am proud to finally be able to say we are reopening the Primark Bank Buildings store.”

“Tragically the 2018 fire did see the heart torn out of our city centre, and the emotions people felt, they were so high because this place, this building, this store, it just means so much,” she said.

“Today we’re celebrating the successful completion of this major restoration project, saving one of our most beautiful and iconic buildings.”

In the years following the accidental fire, the red sandstone facade of the building was obscured by scaffolding and yellow containers, which were gradually removed in recent months as the work neared completion.

The redevelopment undertaken by the retail giant included demolition and rebuilding.

The new store features 88,200 square feet of retail space, a Disney-themed cafe and immersive experience, and a new nail and beauty studio.

Primark has created almost 300 jobs with the reopening.

The renovation involved hundreds of crafts and tradespeople, including more than 40 expert stonemasons from across the UK and Ireland who were tasked with carving new stone works and repairing existing stone as part of the restoration.

The stone and marble on the building’s new facade was sourced from quarries in Finland, Scotland and Portugal, the same quarries from where the materials for the original structure were sourced in the 18th century.

Primark Northern Ireland area manager Jacqui Byers said: “Today is a great celebration, not only for Primark, but for all of Belfast following years of hard work to recover and rebuild Bank Buildings.

“It is fantastic to have reached this day and return to our home in Belfast, bringing our colleagues back together under one roof with a store that is bigger and better than ever before.

“As we finally reopen, we wish to thank our colleagues, customers, the business community and the wider city of Belfast once again for their continued support over the past four years.

“Restoring Bank Buildings has been a passion project for Primark, completed in partnership with the wider city of Belfast and our amazing team of crafts and tradespeople – it has been a true team effort.

“This is a proud moment for us, and it is a testament to every individual involved that we welcome shoppers back today.”