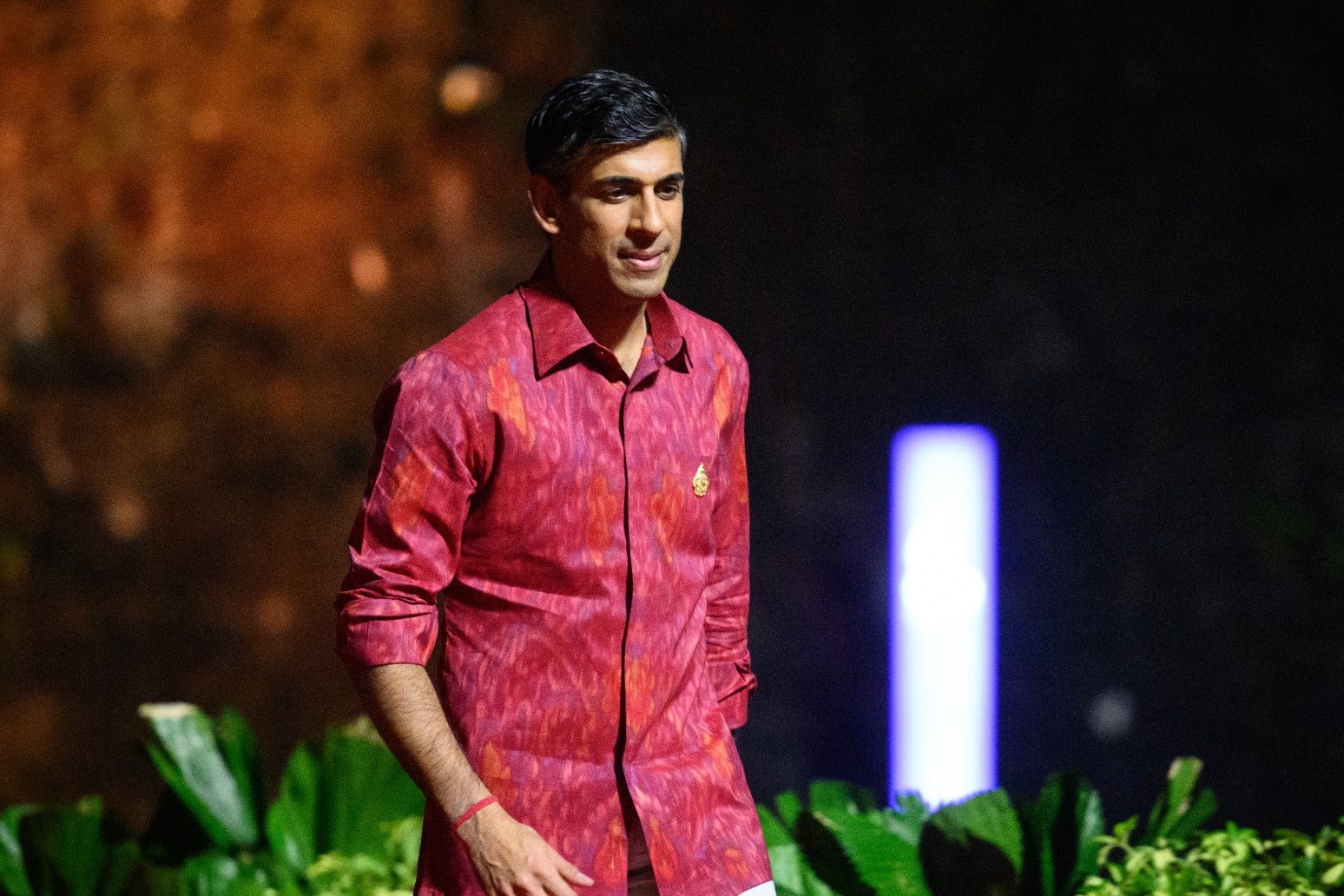 Rishi Sunak joined an emergency meeting at the Bali G20 summit and held talks with Joe Biden after a missile killed two people in Poland and Moscow hit Ukraine with “barbaric” strikes.

They pledged to offer their “full support” for Poland’s investigation into the incident, with preliminary assessments from US intelligence later suggesting the missile was fired by Ukrainian forces at an incoming Russian one.

Mr Sunak then held his first in-person talks with Mr Biden, in which he hailed the US as the UK’s “closest ally”.

The PM told Mr Biden: “I think the partnership between our countries is unique and enduring.

“And I’m glad to see that partnership in action doing good whether it’s standing up to – and I agree with your words – barbaric activity by Russia in Ukraine, but also tackling climate change, stabilising the global economy.”

Mr Sunak was also due to hold a bilateral meeting with Chinese President Xi Jinping, in which he was going to call for a “frank and constructive relationship” with Beijing while also raising its human rights abuses, Downing Street said.

Mr Sunak has been warned by critics that he could be seen as “weak” for “drifting into appeasement with China”, after he appeared to soften his rhetoric to declare the country a “systemic challenge” rather than a “threat”.

In talks with India’s Prime Minister Narendra Modi, Mr Sunak was set to confirm a deal allowing 3,000 young professionals from India to work in the UK for two years.

The visa agreement comes as he is trying to finalise a delayed trade deal with India, but it could set him on a collision course with Home Secretary Suella Braverman – who has opposed relaxing immigration controls as part of any trade talks.

The Prime Minister used the first session of the two-day Bali summit to condemn Moscow’s actions in Ukraine, which he blamed for worsening global economic challenges.

Ahead of his planned meeting with Mr Xi, he said none of the issues being discussed at the G20 could be solved without engaging with the world’s second-largest economy.

Speaking to reporters in Bali, the Prime Minister’s official spokesman said: “He’s going to be clear on the need for China and the UK to establish a frank and constructive relationship.

“The challenges posed by China are systemic, they’re long term, and it’s a country with fundamentally different values to ours.

“China has an authoritarian leadership, which as we’ve been clear on has attempted to reshape the international order.

“We are clear-eyed therefore in how we approach our relationship with China.”

Mr Sunak would “obviously raise the human rights record” with Mr Xi, No 10 said, but declined to go into specifics such as whether that would include China’s treatment of the Uighur Muslim minority in Xinjiang.

But news of the meeting drew the ire of former Conservative Party leader Sir Iain Duncan Smith, who said: “I am worried that the present Prime Minister, when he meets Xi Jinping, will be perceived as weak because it now looks like we’re drifting into appeasement with China, which is a disaster as it was in the 1930s and so it will be now.”

The Prime Minister has used his trip to Indonesia to emphasise the Indo-Pacific tilt to the UK’s foreign policy.

With Mr Modi, he was planning to give the go-ahead for the reciprocal scheme allowing 18 to 30-year-old degree-educated Indians to work in the UK from early next year.

The UK is still seeking a trade deal with New Delhi, after the Government missed a Diwali cut-off point for striking an agreement set by Boris Johnson.

Ms Braverman was accused of scuppering negotiations with her controversial remarks about Indians overstaying visas.

Asked about concerns that the young professionals route could lead to more people overstaying visas, Mr Sunak’s spokesman said: “Overstaying is illegal and in fact part of this agreement makes it easier to return Indian nationals who have no right to be here.”

The Prime Minister said he would discuss the trade deal with his Indian counterpart during their meeting, describing it as a “fantastic opportunity” for the UK.

“But I wouldn’t sacrifice quality for speed, and that goes for all trade deals,” he told reporters travelling with him to the G20.

He noted that trade was just one part of the relationship as he promised “progress” on “multiple different aspects of policy”.

It echoed remarks he made following scathing criticism of the Australian agreement from a former Cabinet minister.

Former environment secretary George Eustice said the deals negotiated with Australia and New Zealand included provisions that were not in the economic interests of the UK, with the Government giving away “far too much” to secure the post-Brexit accords.

Asked if he would ratify the Australia deal, Mr Sunak told the BBC on Tuesday: “In trade deals there’s always a degree of give-or-take and there are many positives from this deal but it is right going forward that we don’t sacrifice quality for speed.”

Other one-on-one talks he had lined up on Wednesday, before reports emerged of the missiles landing in Poland, were with his Australian counterpart Anthony Albanese and Indonesian President Joko Widodo.

A meeting with Japan’s Mr Kishida was called off as both leaders attended the emergency session on the incident in Poland.