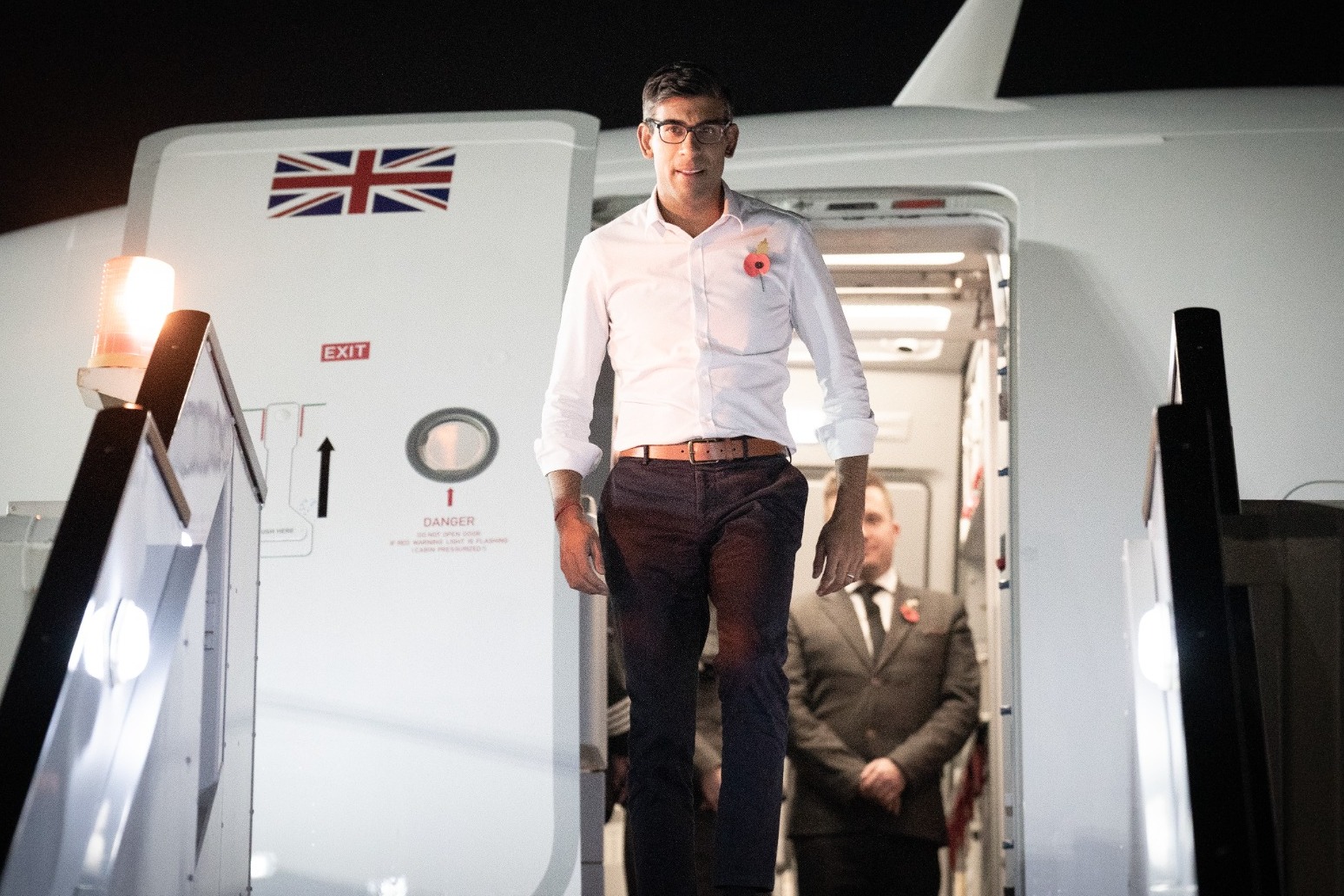 Rishi Sunak will call for a “global mission for clean growth” as he joined other world leaders at the start of the latest Cop27 international climate change talks in Egypt.

Downing Street said the Prime Minister will be looking to set the seal on last year’s Cop26 summit in Glasgow with more than £200 million in UK funding to protect forests and invest in “green” technologies.

But as he prepared to pass on the baton to the Egyptians, he faced criticism at home over the Government’s decision to issue more licences for oil and gas exploration in the North Sea on its continued opposition to new onshore wind.

Mr Sunak’s attendance at the gathering in the Red Sea resort of Sharm El-Sheikh alongside leaders such as US President Joe Biden and French President Emmanuel Macron marks his first outing on the international stage since becoming Prime Minister last month.

In his opening address on Monday, he will say it is essential countries stick to commitments made in Glasgow if the world is to avoid the worst impact of climate change by limiting warming to 1.5C above pre-industrial levels.

At the same time, he will argue that the transition away from fossil fuels has the potential to drive growth and deliver jobs in the new green industries of the future, while cutting off funding for Russia’s war in Ukraine.

Mr Sunak is expected to say: “The world came together in Glasgow with one last chance to create a plan that would limit global temperature rises to 1.5C. The question today is: can we summon the collective will to deliver on those promises?

“I believe we can. By honouring the pledges we made in Glasgow, we can turn our struggle against climate change into a global mission for new jobs and clean growth.

“And we can bequeath our children a greener planet and a more prosperous future. That’s a legacy we could be proud of.”

Arriving in Sharm El-Sheikh on Sunday, the Prime Minister said he wanted the UK to be a leader on the issue.

“We led the world last year when it came to the Cop we hosted, achieved some very important things, we need to cement our leadership,” he told The Sun.

“I want to make sure I’m there flying the flag for the UK, being a leader on these issues.”

He also paid tribute to the role of the King, even though he will not be at the gathering following an agreement between the Palace and former prime minister Liz Truss.

“He has demonstrated incredible leadership on this issue for a very long time. Even though he is not going to be there in person, I know he will be there in spirit. His leadership and influence will be guiding us,” he said.

Downing Street said Mr Sunak will announce a further £65.5 million for the clean energy innovation facility which provides grants to researchers and scientists in developing countries working on clean technologies – from biomass-powered refrigeration in India to lithium-ion batteries in Nigeria.

The UK is also committing £90 million for conservation in the Congo Basin rainforest and £65 million to support indigenous and local forest communities as Mr Sunak launches a new group to track commitments made in Glasgow on deforestation.

Mr Sunak had originally not intended to travel to Egypt, arguing his priority was to sort out the estimated £50 billion black hole in the public finances ahead of Chancellor Jeremy Hunt’s autumn statement on November 17.

But he was forced into what opposition parties called a “screeching U-turn” after coming under fire from within his own party, as well as from environmentalists questioning his commitment to the net zero agenda.

“Rishi Sunak is the man who had to be dragged kicking and screaming to go to Cop so it’s simply implausible for him to claim the mantle of climate leadership. Rishi Sunak is a fossil fuel prime minister in a renewable age,” he said.

The latest round of UN climate talks takes place against a backdrop of increasingly devastating extreme weather around the world as well as an energy and cost-of-living crisis driven by President Vladimir Putin’s invasion of Ukraine.

While there is evidence Russia’s actions have prompted an acceleration towards clean technology, the UN has warned that, based on countries’ latest climate action plans, there is currently no credible pathway to meet the 1.5C goal intended to avoid the worst impact of global warming.

Rich countries are also falling short in providing the finance needed to help developing nations adapt to a changing climate and develop cleanly, the UN has warned.

With vulnerable countries increasingly being hit by extreme storms, floods and droughts, such as Pakistan’s devastating flooding this year, how to address – and pay for – the now unavoidable loss and damage poorer countries are facing from climate change will be one of the key issues at the talks.