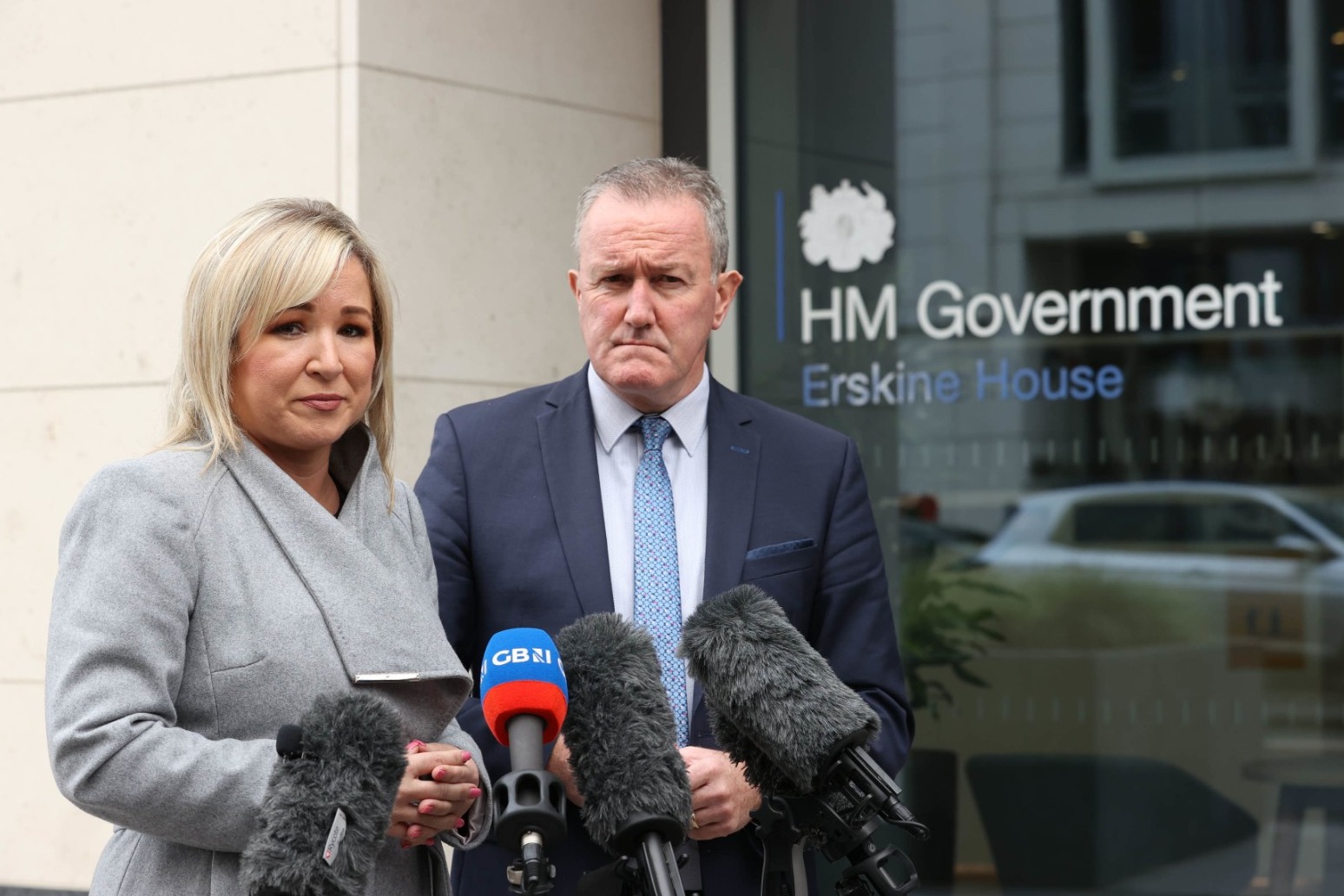 Northern Ireland’s two main parties have accused Chris Heaton-Harris of failing to provide clarity on whether a Northern Ireland election would be held.

It comes after the Northern Ireland Secretary met with Stormont leaders on Tuesday morning amid continuing uncertainty over if and when he intends to call an election in the region.

Sinn Fein vice president Michelle O’Neill said he had provided “no clarity” as to how he will deal with the ongoing crisis at Stormont, while DUP leader Sir Jeffrey Donaldson said they were not told “if and when” an election would be called.

“So, at the moment, neither we nor the people of Northern Ireland know if and when an election will take place,” Sir Jeffrey said.

Mr Heaton-Harris failed to set a date for a new poll last Friday, despite repeatedly indicating that he would do so the minute a legislative deadline for calling the poll passed.

Speaking after their meeting, Ms O’Neill said he provided “no clarity” about the events on Friday or his “bizarre U-turn” in not immediately setting a date for an election.

“The Secretary of State told us that he had a legal obligation, that he would call that election at one minute past midnight (on Friday),” she said.

“Then what we saw unfold last Friday was a bizarre U-turn, the failure to continue in that vein.

“We’ve met with him again this morning. We’ve asked him a number of questions, but I have to say (he) provided no clarity, he provided no further information as to the U-turn.

“We’re left with no information in terms of what happens next, or at least what he intends to do next.

“It’s very clear he has a legal obligation in which to call an election if an Executive is not formed.

“But he did not colour in the lines today. He certainly did not provide any clarity around what he intends to do next, apart from to say that he’s here to meet with people.”

Sir Jeffrey said his party had also received no indication whether a deal on the Northern Ireland Protocol was near.

“Certainly for the part of the UK Government, we’ve had no indication at this stage that an agreement is close or imminent.

“That’s why yesterday and today I’m calling on the Government to have a razor-sharp focus on these negotiations. Let’s make progress. Let’s get this done.

“Let’s get a solution that replaces the protocol with arrangements that respect Northern Ireland’s place within the United Kingdom and its internal market.”

Alliance Party leader Naomi Long said her meeting with Mr Heaton-Harris was “constructive”, and that he was “taking time to reflect” before making any decision on an election.

“From our perspective, we welcome the fact that the Secretary of State has listened to what’s been said by the people of Northern Ireland, that he has paid attention to the issues that have been raised and he is clearly taking time to reflect on the way forward.”

Mrs Long said Mr Heaton-Harris should take action to ensure that civil servants had more powers to make decisions in the absence of elected ministers, and that MLA pay also needed to be cut if the power-sharing impasse continued.

“I’ve been very open and honest in saying that I don’t believe a situation where we continue to be paid on full salaries with no prospect of a return to government is sustainable,” she said.

Ulster Unionist Party leader Doug Beattie said that Mr Heaton-Harris had “no plan on how we proceed”, and that calling an election would be “nonsensical”.

“There is a dearth in thinking about what we could do and it’s really difficult to see how we broker anything unless we have some form of a pathway to deal with the issues that are put in front of us.”

He said that it was “quite clear” that the issue is with the protocol, and compared Northern Ireland to a football between the UK and the EU.

“But if the plan is to have an election, then it’s just nonsensical.”

The 24-week deadline for forming a functioning Assembly and power-sharing executive in Belfast following May’s election ran out at midnight on Friday.

A DUP boycott of the devolved institutions – in protest at the Northern Ireland Protocol – has prevented an administration being formed in the wake of the election result.

Once the deadline passed, the UK Government assumed a legal responsibility to call a fresh election within 12 weeks.

Mr Heaton-Harris has insisted he still intends to call an election but has avoided setting a date, prompting Northern Ireland’s chief electoral officer, Virginia McVea, to apologise to election workers who are on stand-by to assist on the basis that polling day will be December 15.

The minister pledged to reveal more about an election this week after speaking with Stormont’s political parties; he also indicated he would potentially take action to cut MLAs’ pay.

The Government has vowed to secure changes to the protocol, either by a negotiated compromise with the EU or through proposed unilateral domestic legislation, the Northern Ireland Protocol Bill, which would empower ministers to scrap the arrangements without the approval of Brussels.

The European Commission has said the latter approach would breach the terms of an international treaty and potentially prompt retaliatory action.