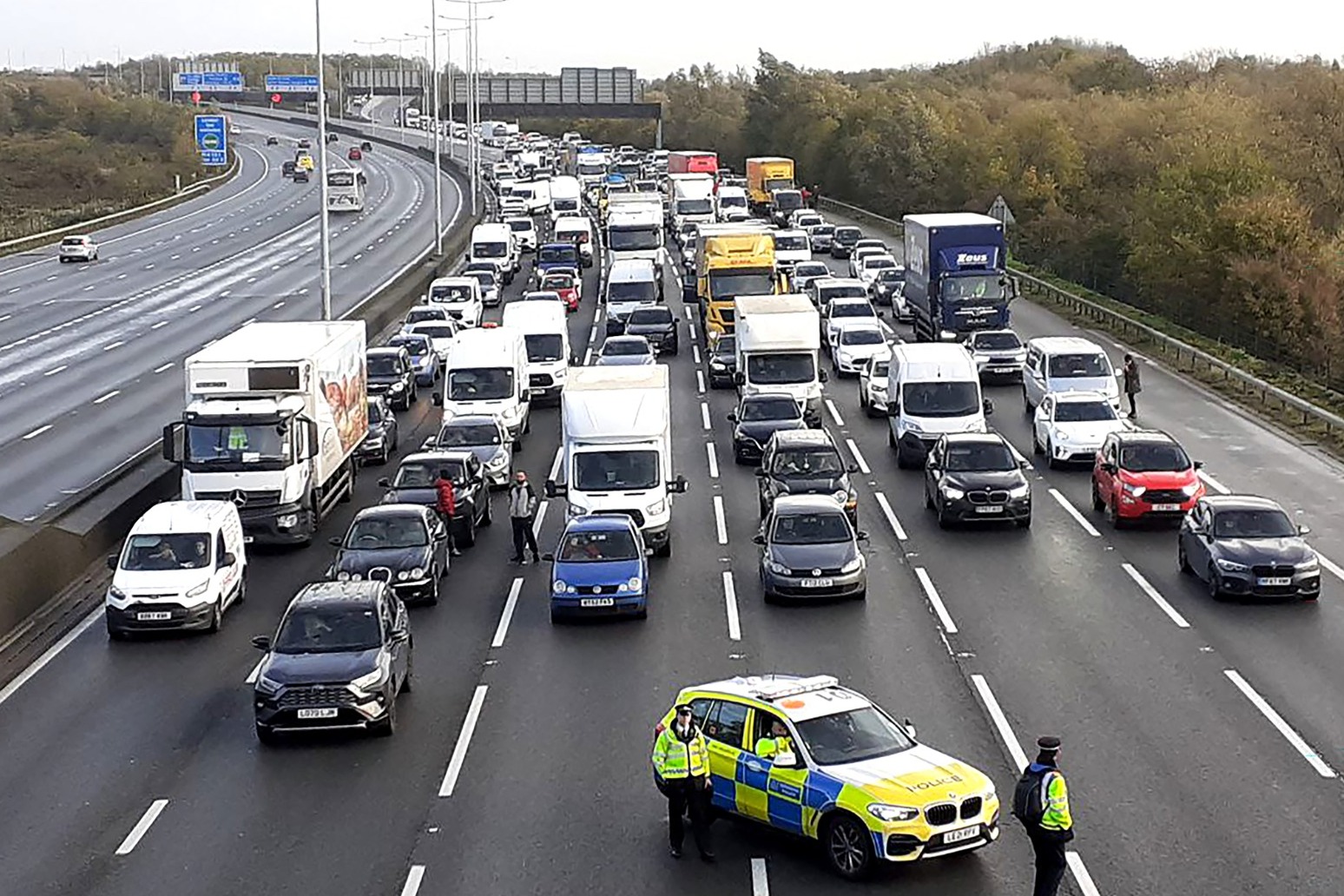 Protesters are causing widespread disruption on the M25 for a second day after several junctions were blocked.

Just Stop Oil said “approximately 15” of its supporters climbed on to overhead gantries in “multiple locations” on the UK’s busiest motorway from 7am on Tuesday, causing police to halt traffic.

The Metropolitan Police said 16 protesters were arrested in a joint operation with neighbouring forces, including Essex Police, Surrey Police and Kent Police.

Meanwhile, eight people charged with conspiracy to cause a public nuisance following protest action on Monday are due to appear at Westminster Magistrates’ Court.

On Tuesday, Essex Police said a protester climbed on to the gantry at junction 31, causing the Dartford Tunnel to be closed.

The force said: “Specialist officers were mobilised quickly and managed to bring the woman down and arrest her within 90 minutes of her being spotted.

“As a result, the tunnels at the crossing were closed but one has since reopened.”

National Highways said there were delays of an hour, with congestion for five miles.

Just Stop Oil also targeted at least six other locations on the M25.

The Met said it deployed “specialist removal teams” to deal with the protesters.

It urged members of the public stuck in traffic to “stay in their cars and refrain from using the hard shoulder”.

Protests took place at 13 locations on the M25 on Monday.

Police believe some of those involved in the demonstrations could have breached a High Court injunction obtained by National Highways.

Just Stop Oil said in a statement: “We will not be intimidated by changes to the law, we will not be stopped by private injunctions sought to silence peaceful people.

“Our supporters understand that these are irrelevant when set against mass starvation, slaughter, the loss of our rights, freedoms and communities.”

The Met is conducting an operation to foil the protests in conjunction with the National Police Coordination Centre.

Just Stop Oil staged 32 days of disruption from the end of September and throughout October, which the Met said resulted in 677 arrests with 111 people charged, and officers working a total of 9,438 additional shifts.

According to the group, Just Stop Oil supporters have been arrested nearly 2,000 times since its campaign began on April 1, and five are currently in prison.

It warned the Government’s refusal to halt North Sea oil and gas extraction will contribute to global warming, which “will result in the collapse of ordered civil society, the loss of our rights and freedoms and the death of countless millions of people”.

Work and Pensions Secretary Mel Stride said Just Stop Oil protesters do have a point “in (a) sense”.

He told Sky News: “I do think there’s a major issue when individuals can go on to motorways or even just outside Parliament, in fact, periodically, at will, just sit down in the middle of the road and disrupt the traffic – sometimes, indeed, emergency services get caught up in that as well.”

But when it was put to him that the environmental activists have a point, he said: “Well, they do in (a) sense. Couple of points… one is, absolutely, we are all determined, and this Government above all else is absolutely determined, to bear down on the use of fossil fuels.

“Second point I would make is that we do have to strike the right balance between the right of individuals to express their opinion and protest, which is absolutely fundamental to a civilised democracy – which is what we have in our country – and, at the other time, making sure that we don’t inconvenience the public or indeed endanger the public in some circumstances.”