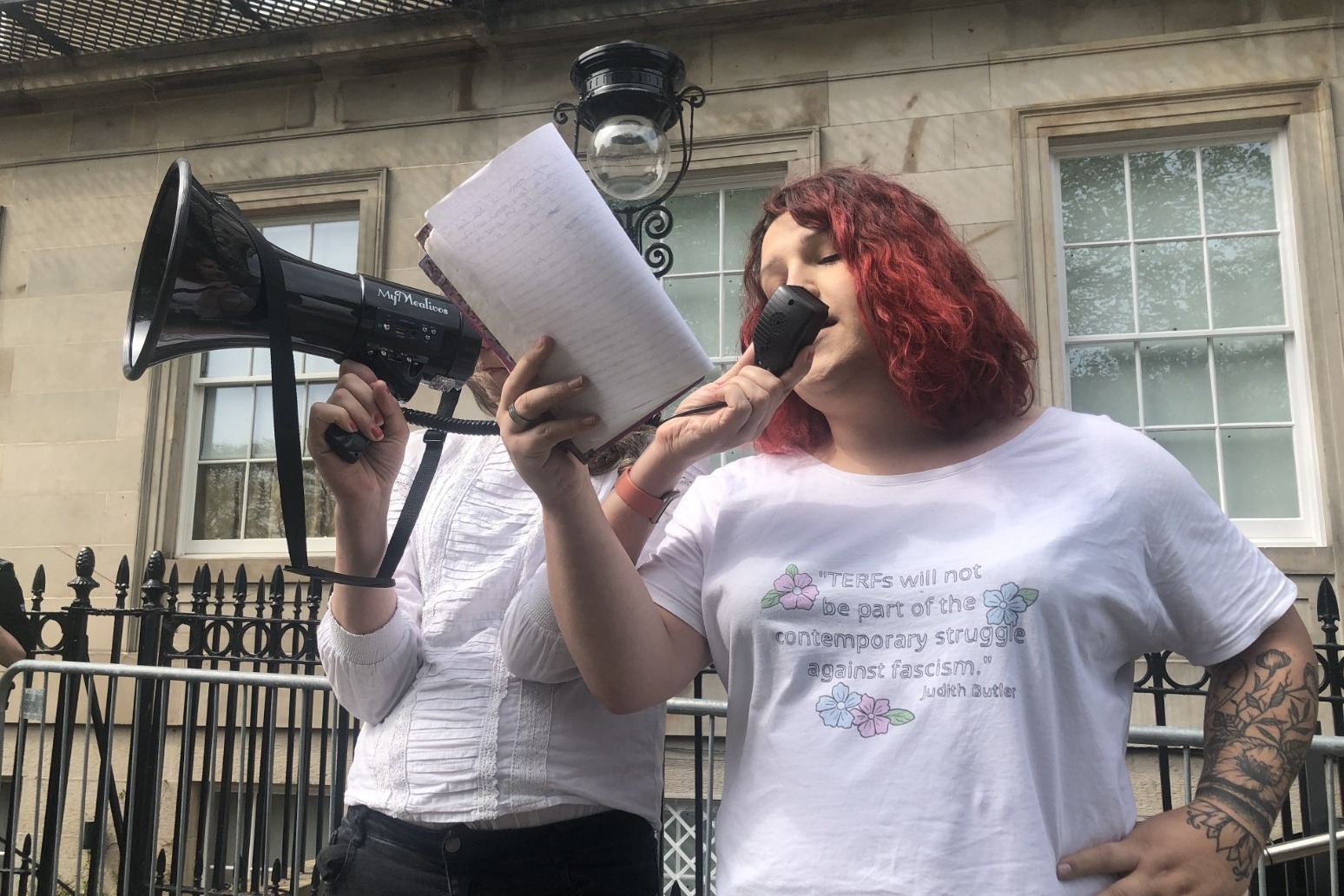 MSPs and reproductive rights campaigners gathered in Edinburgh to show solidarity with their US peers protesting over the Roe vs Wade re-appeal.

The demonstration, outside the US Consulate in the Scottish capital, took place as hundreds of thousands of people across America took to the streets to protest about the US Supreme Court’s looming decision to overturn the 1973 landmark decision which made abortion legal.

Scottish Green MSP Gillian Mackay was one of those in attendance, showing her solidarity with pro-choice campaigners in Scotland and abroad.

She spoke to campaigners about her Member’s Bill on buffer zones in Scotland, which she hopes will launch in a couple of weeks.

Its aim is to set up protection areas around healthcare settings that provide abortion services to make sure people cannot protest against those trying to access services.

Speaking at the demonstration, Ms Mackay said: “We are here in Edinburgh today to stand in solidarity with out sisters in America and those who may be affected by the rolling back of the Roe vs Wade case in America.

“I am also, hopefully, in a couple of weeks, launching my members bill to introduce buffer zones in Scotland to make sure that no one has to continue to face the harassment that we’ve seen here in Scotland.

“There’s definitely been an escalation after the Roe vs Wade judgment was leaked.”

Monica Lennon MSP also showed her support for activists by saying a few words at the protest.

The Labour politician said she stands in solidarity with those fighting for reproductive rights.

She told campaigners: “It’s important that you encourage everyone you know to submit their view because we know that sometimes consultations about abortion rights about women’s rights are hijacked by those who want to own back our rights.”

One of those included Ann Henderson, from Abortion Rights Scotland.

She said “international solidarity is key” in response to the Roe vs Wade re-appeal, adding: “While social media brings its own problems, in this instance it’s wonderful to be able to let women in the United States know instantly that we are here and that we are supporting their campaign.”

One campaigner called Caroline, who preferred to not give her full name, told activists she has been through two abortions.

“I would not be the mother that I am today if it wasn’t for my abortions,” the mother-of-two said.

She compared life in Texas for women, where abortion is illegal once embryonic cardiac activity is detected – typically as early as six weeks of pregnancy, to Margaret Atwood’s The Handmaid’s Tale, a futuristic dystopian novel.

Beth Douglas, from Glasgow, also gave a speech at the protest.

The 28-year-old led an emergency demonstration outside Edinburgh’s US Consulate last week when news broke about the leaked Roe vs Wade re-appeal.

She said: “I am a campaigner for body autonomy – not just for trans people but for the whole LGBT community and for cis-women, cis-sisters, trans brothers and non-binary siblings, because body autonomy matters to all these groups, we need to protect it and we need to be united as much as possible in this.

“What’s happened in America is absolutely disgusting, an absolute horrifying shame that we are in a situation where billions of people are going to lose the right to chose what happens to their own body.

She added: “Sometimes we try and idolise Scotland, but we are far from a shining alternative right now.

“There are people being denied healthcare because of religious bigots outside of our healthcare settings, shaming them, that’s disgusting.

“If body autonomy falls in one area, it will fall in others, if it stops for one group, it will crumble for others.

“Everyone should be able to make decisions over their own bodies, regardless of what that is.”

Ms Douglas, a transwoman, was interrupted during her speech by women from feminist groups including Scottish Feminist Network and Edinburgh Feminists.

They were seen carrying placards saying “no uterus no opinion”, and could be heard saying “this is not relevant” as Ms Douglas spoke about body autonomy.

In response to their comments, Ms Douglas said: “We need to stop fighting between each other and we need to come together, because it’s body autonomy that’s at stake.

Dr Lindsay Jaack, 34, who organised the protest, said: “I am not affiliated with any organisation, I am just an American who lives in Edinburgh who is very distraught and feeling gutted about the Roe vs Wade opinion when it was leaked and just wanted to come together in solidarity.

“I am heartened by the fact that Scotland is reacting to the situation in the US by strengthening the right to a safe, legal, local and free abortion.”