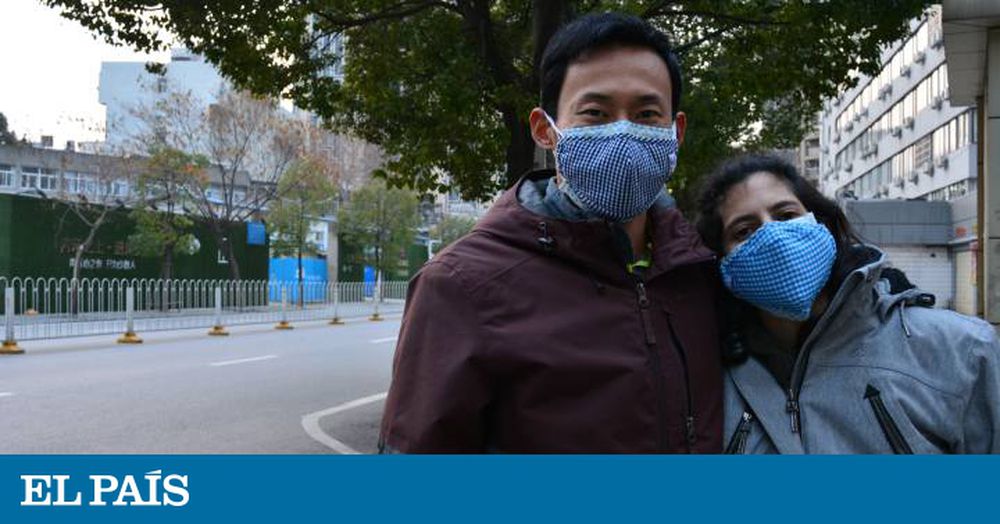 They were still in their pajamas and sipping their morning coffee when Sun Naitian proposed to Dácil Sánchez. It took her a few moments to process the information, and at first she thought it was a joke. But as soon as she realized that it was for real, her answer came spontaneously: yes. Now, after two years of marriage, Dácil is facing a much more complicated choice.

The couple lives in Wuhan, the epicenter of the outbreak of the 2019 novel coronavirus – technically known as 2019-nCoV – that has already caused some 132 deaths and infected more than 6,000 people, according to official figures.

It’s very nice to get out of here, but it’s very tough to leave your family behind

The Spanish government has launched an effort to repatriate citizens trapped in the Chinese city, where residents were quarantined on January 23. Chinese authorities have clearly said that none of their own citizens will be evacuated. This means that Dácil has to make a choice: either flee the heart of this global epidemic, leaving her husband behind without knowing when she will see him again, or stay in Wuhan with him, without knowing when they’ll be able to get out.

“This is the first time in four days that we have gotten out of the house,” they note. The couple lives on the other side of the Yangtze River, in the district of Wuchang, far from the area where the infection started to spread. Maybe that is why there are still a few people out on the streets here. Naitian is 31, Dácil is 26, and it is hard to distinguish their faces through the double masks that each one is wearing – an additional protection measure that many people have adopted in recent days. The couple walks hand in hand as we head for a local restaurant where they share their story. There are no other customers there.

Eight years ago Sun Naitian, a young man from the small city of Chifeng (small by Chinese standards: the population is 4.3 million) in Inner Mongolia, decided to move to Beijing in search of a job. He had a degree in chemical engineering, but was forced to accept all kinds of work in order to make a living: waiter, photographer, radio host… even personal trainer. It was at the gym that he met Dácil Sánchez, a young woman from Santa Cruz de Tenerife who had moved to Beijing with her family in 2014. When her parents returned to Spain, she was forced to choose, and she chose to stay behind “out of love.”

Dácil and Naitian speak with each other in a combination of Chinese, Spanish and English. A couple of years ago they moved to Wuhan, where she ran the only Spanish restaurant in town, named Alioli. That was until a year ago, when the entire street where the restaurant was located was demolished following a local ordinance. Since then, Dácil has been making a living by offering Spanish lessons. “Fortunately,” none of her students are infected, she notes. Sun Naitian is in charge of a restaurant specializing in hot pots. He works 12 hours a day and gets one day off a week. Or rather, this was their life until the outbreak.

The coronavirus caused a large amount of people to quickly leave the city. “Around Monday, January 20, people started to leave, lots of people. The metro was full of suitcases,” recalls Dácil. By Wednesday, a day before the city was quarantined, they bought food just in case. It was a wise move. “If you go to the market now, you won’t find any fruit or vegetables, and that’s if the market is open at all, because most of them are closed.”

“In those days people were lining up to buy face masks, and some places were selling them for €30 [230 yuan, when the regular price is around 30 yuan].” The speculation ended when the government stepped in to guarantee the supply of essential goods as well as price stability.

Chinese authorities are not allowing the evacuation of their own citizens, not even those who are married to foreign nationals or children with dual citizenship

“I was told that the Spanish consulate was searching for Spaniards living in Wuhan, so I got in touch with them and explained our situation,” says Dácil. But as the consulate noted, Chinese authorities are not allowing the evacuation of their own citizens, not even those who are married to foreign nationals or children with dual citizenship, a concept that Chinese legislation does not recognize. Up to six families could be in this situation, although the consulate has not confirmed this figure.

In a message, consulate officials said they were in talks with the relevant authorities in China. “We’re going to keep trying right to the end, I still have hope,” says Dácil. “If we don’t manage it, I will leave by myself, but it will be with bittersweet feelings. It’s very nice to get out of here, but it’s very tough to leave your family behind.”

“Every day I ask myself the same questions and I never find any answers, and it’s very frustrating,” adds the Spaniard. “If I leave and something happens to him, what will we do? I’ll be in Spain and I won’t be able to do anything from there.”

But Naitian is encouraging his wife to go. “Even if they don’t let me leave, she should go in any case. Her family will feel better, knowing she is all right.”

There is another dimension to their dilemma: once they say goodbye, they don’t know when they’ll see each other again. “This outbreak has been going on for over a month, and nobody knows how long it will last,” says Dácil. “If I leave, I will probably have to spend some time in quarantine, and even after that, it’s still unclear when I’ll be able to come back.”

During the SARS outbreak of 2002-2003, it was seven months before the situation stabilized. “We don’t know how long it will be before we see each other, or what will happen after that.”

Over a thousand ETA weapons destroyed in ceremony in Madrid