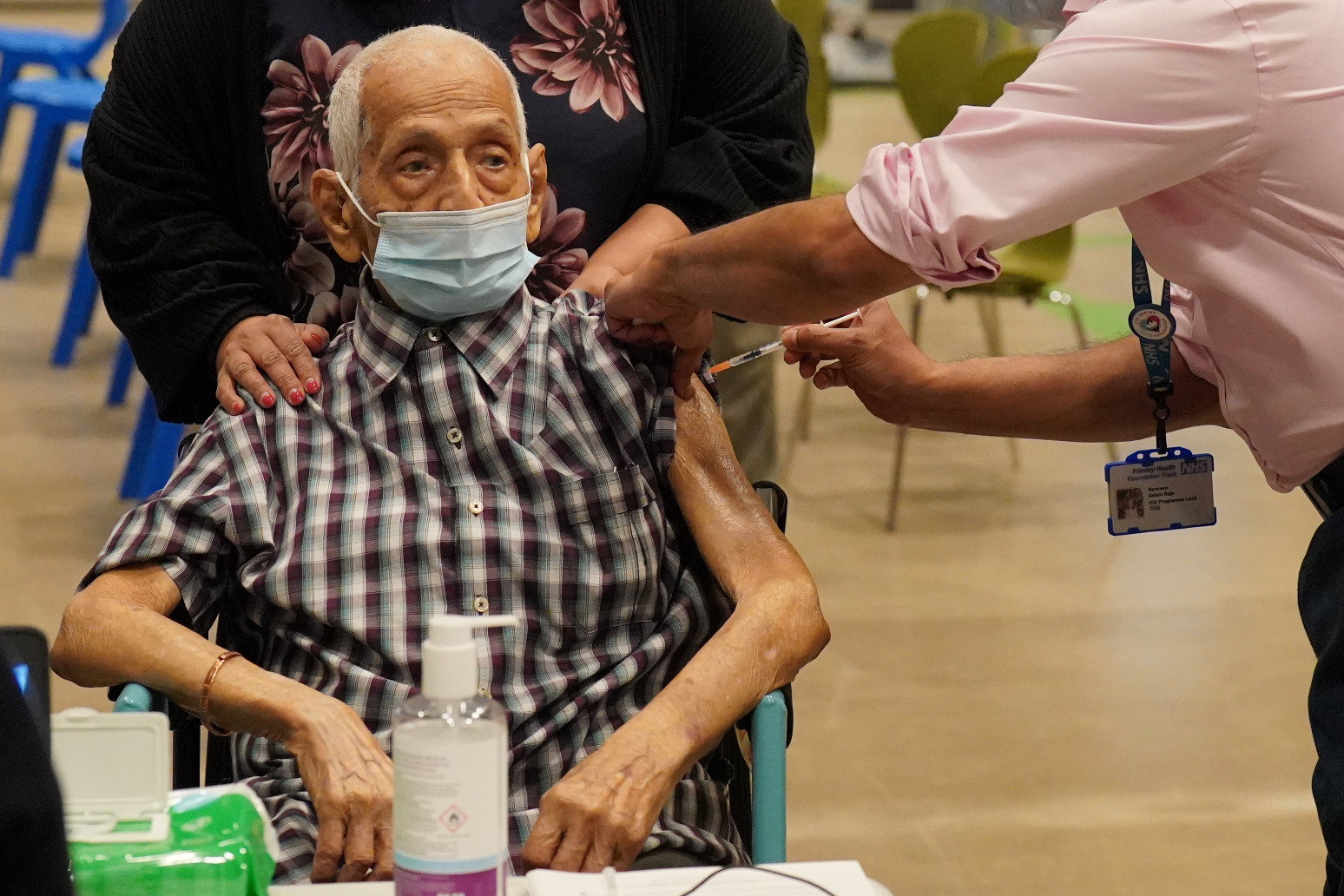 Devraj Jhalam, 95, received his latest injection in Slough as preparations continue for an autumn campaign that could include everyone aged 50 and over

One of the first people in England to get the spring Covid booster has told others offered a fourth Covid jab: “Do not delay.”

Devraj Jhalam, 95, received his latest injection in Slough as preparations continue for an autumn campaign that could include everyone aged 50 and over.

The newest rollout, which began on Monday, is for people aged 75 and over and the vulnerable, with people becoming eligible if they had their last vaccine six months ago.

Retired engineer Mr Jhalam said he was pleased and grateful to be able to get a top-up.

The grandfather-of-two said: “I was really happy to come here because, you know, I am 95 – very, very vulnerable. Fortunately, so far I didn’t get any infection but I hear stories (of others who have).”

Encouraging those who are eligible to come forward for their jab, he said: “Everybody must. In my age group, everybody must have it immediately. Do not delay. Delay means danger. You never know what will happen tomorrow.”

Mr Jhalam, whose GP daughter was with him while he had his jab at Salt Hill Activity Centre, praised the NHS for its success with the vaccine rollout.

He said: “It’s a wonderful thing, really, what’s happened (with the vaccine rollout). There’s only one organisation like the NHS.”

The health service in England is inviting people to arrange a spring jab through the national booking service when it is their turn. This can be accessed online at nhs.uk/covidvaccine or by calling 119.

Rollout of the booster has already started in Wales and Scotland.

Dr Nithya Nanda, clinical director for one of Slough’s primary care networks and a local GP, described the spring campaign as a “timely intervention” amid rising Covid cases.

He said: “What we are seeing at the moment is increasing admissions to the hospital and increasing number of the cases.

“And there is a variant of Omicron that has really made people think again of getting protected from Covid. And I do think and I’m hopeful that this is a timely intervention, especially for our at-risk patients.

“I would urge everybody to come forward to get vaccinated, especially to protect themselves and their family from the increasing cases of Covid.”

Dr Nanda said he is hopeful there will be a “good uptake” of fourth jabs.

England’s chief GP and deputy lead for the NHS Covid Vaccination Programme, Dr Nikki Kanani, said: “The public have come forward time and again – protecting themselves and each other, and around five million people will be eligible to come forward throughout this spring campaign to get another booster.”

It comes as the NHS in England has been told to prepare for a 15-week Covid campaign from September to December.

At a minimum, care home residents and staff, frontline NHS and social care workers, people at risk due to underlying health conditions, and those aged 65 and over would be offered boosters.

A “maximum scenario” would see all those aged 50 and over offered them.

The Joint Committee on Vaccination and Immunisation (JCVI) said an autumn jab campaign will likely be needed to protect those most at risk of severe Covid.

Health Secretary Sajid Javid told BBC Breakfast that the JCVI said “it’s possible there will be an autumn booster campaign, probably for those that are 50 and over, but they haven’t yet made a final recommendation on that”.

He added that, despite rising Covid cases, the Government’s “level of concern hasn’t changed”, with numbers still “way below their peak”.

He said: “And it’s also important for us – when we review this – to understand why they are rising and that is primarily due to the increased social mixing we’re seeing after the country’s opened up, but also the BA.2 sub-variant of Omicron, which we know is, on the one hand, more infectious but, on the other hand, we know that our vaccines work just as well against this sub-variant.

“And so, taking all that into account, of course we keep the data under review, but there’s no particular cause for concern at this point.”

Meanwhile, Cardiff University announced doctors have successfully used vaccination to treat a patient with Covid-19 in what is thought to be the first instance of a jab being used for therapy.

Ian Lester, 37, a dispensing optician from Pontypridd who has a rare genetic immunodeficiency, continued to test positive for Covid for seven and a half months after catching the virus.

Medics from the Immunodeficiency Centre for Wales used two doses of the Pfizer vaccine to treat him and scientists from Cardiff monitored the response as he got the all-clear.