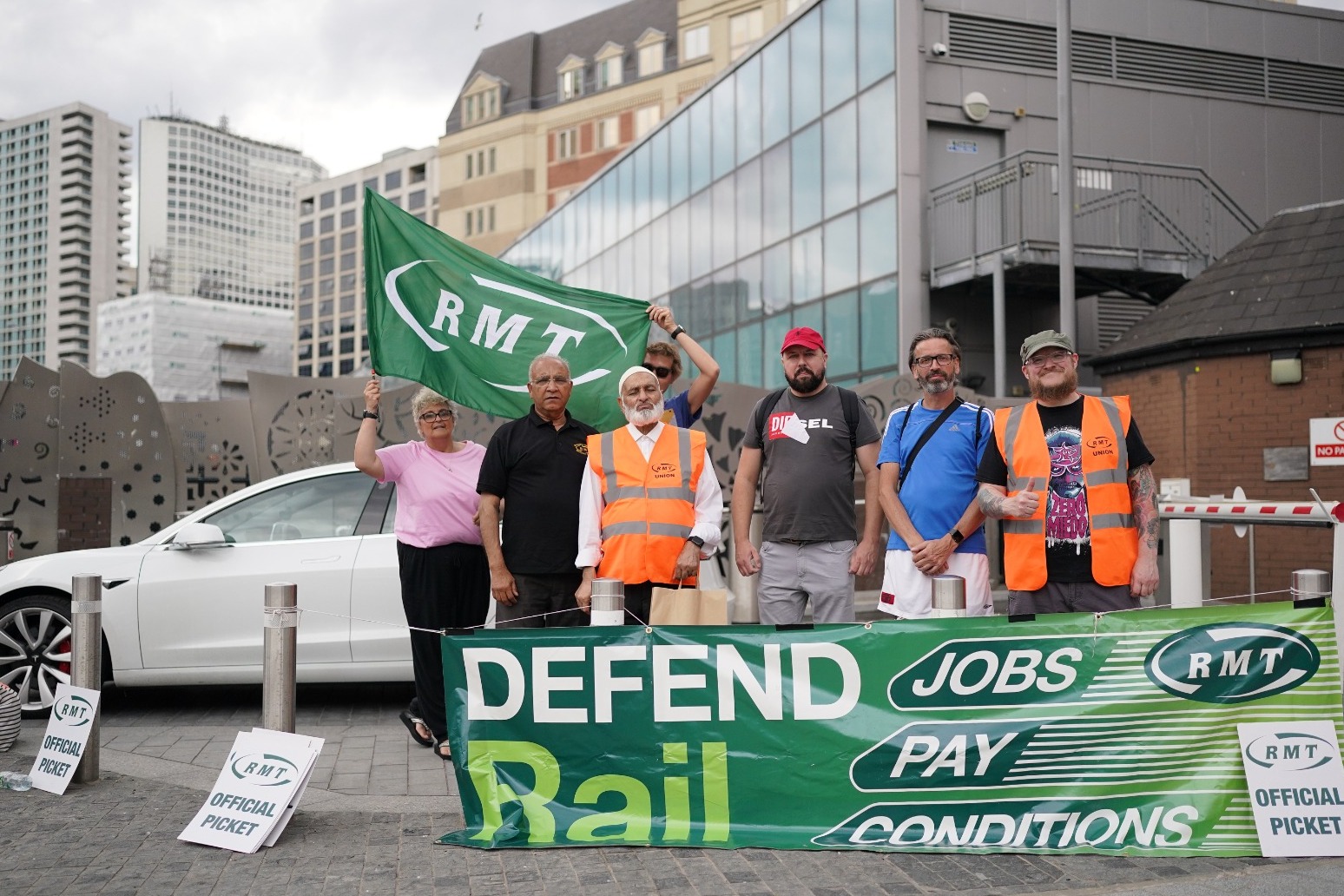 More passengers were attempting to travel despite Wednesday’s rail strike than during last month’s industrial action.

Network Rail said around 15% more people were using its stations than on Thursday June 23, which was the second day members of the Rail, Maritime and Transport (RMT) union had gone on strike in the bitter dispute over jobs, pay, pensions and conditions.

But the total remained around two-thirds down on a normal Wednesday.

Passengers were urged to only travel by train if they had to.

Only around 22% of services were running, with just half of the network open, and services were stopping at 6.30pm, meaning the last trains to many destinations were departing mid-afternoon.

Trains will also be disrupted on Thursday morning with a later start as employees return to duties.

Around 80% of normal services will run across the day as a whole.

Picket lines were mounted outside railway stations as thousands of members of the RMT at Network Rail and 14 train operators went on strike.

More strikes will take place in the coming days, and a wave of industrial action is planned for next month on the railways and London Underground.

Members of the Transport Salaried Staffs’ Association (TSSA) at Avanti West Coast also walked out on Wednesday, while members of the drivers’ union Aslef at seven companies will strike on Saturday.

Many passengers turning up at stations on Wednesday were unaware of the strike.

Fabian Ward sat on the Birmingham New Street concourse, planning how to get home to Telford, 34 miles away.

He said: “I didn’t know about the strikes to be fair, otherwise I would have driven.”

A few dozen protesters were on a picket line at the main entrance to London Waterloo.

Ola, one of the pickets, said: “We have been here since 7am. The support from the public has been particularly good.”

He told ITV’s Good Morning Britain: “If we don’t make a stand today, people’s lives could be lost.”

Asked whether he expects to be sacked by Sir Keir, Mr Tarry said: “I’ve no idea what Keir will decide to do but I know this – if Keir was in government right now, this dispute wouldn’t be happening.”

RMT general secretary Mick Lynch said he does not know when the strikes will end.

Mr Lynch, who spoke to the PA news agency on the picket line at Euston, said: “I don’t know how long they’ll go on. When we get a negotiated settlement that our members support then the strikes will cease.

Asked whether there is any other alternative, he replied: “I could do trial by combat… but I can’t think of (another) way at the moment because we’ve been negotiating for two years.

“But it would be interesting if me and (Transport Secretary) Grant Shapps went head to head, if that’s not too flippant.”

Network Rail chief executive Andrew Haines said: “Despite our best efforts to find a breakthrough, I’m afraid there will be more disruption for passengers this week as the RMT seems hell-bent on continuing their political campaigning, rather than compromising and agreeing a deal for their members.

“I can only apologise for the impact this pointless strike will have on passengers, especially those travelling for holidays or attending events such as the Uefa Women’s Euro 2022 semi-final (on Wednesday) and the opening ceremony of the Commonwealth Games (on Thursday).”

Members of the RMT and TSSA will launch co-ordinated strikes on August 18 and 20, while the RMT announced a strike on London Underground on August 19.