Thousands flock to village with royal connections to welcome King 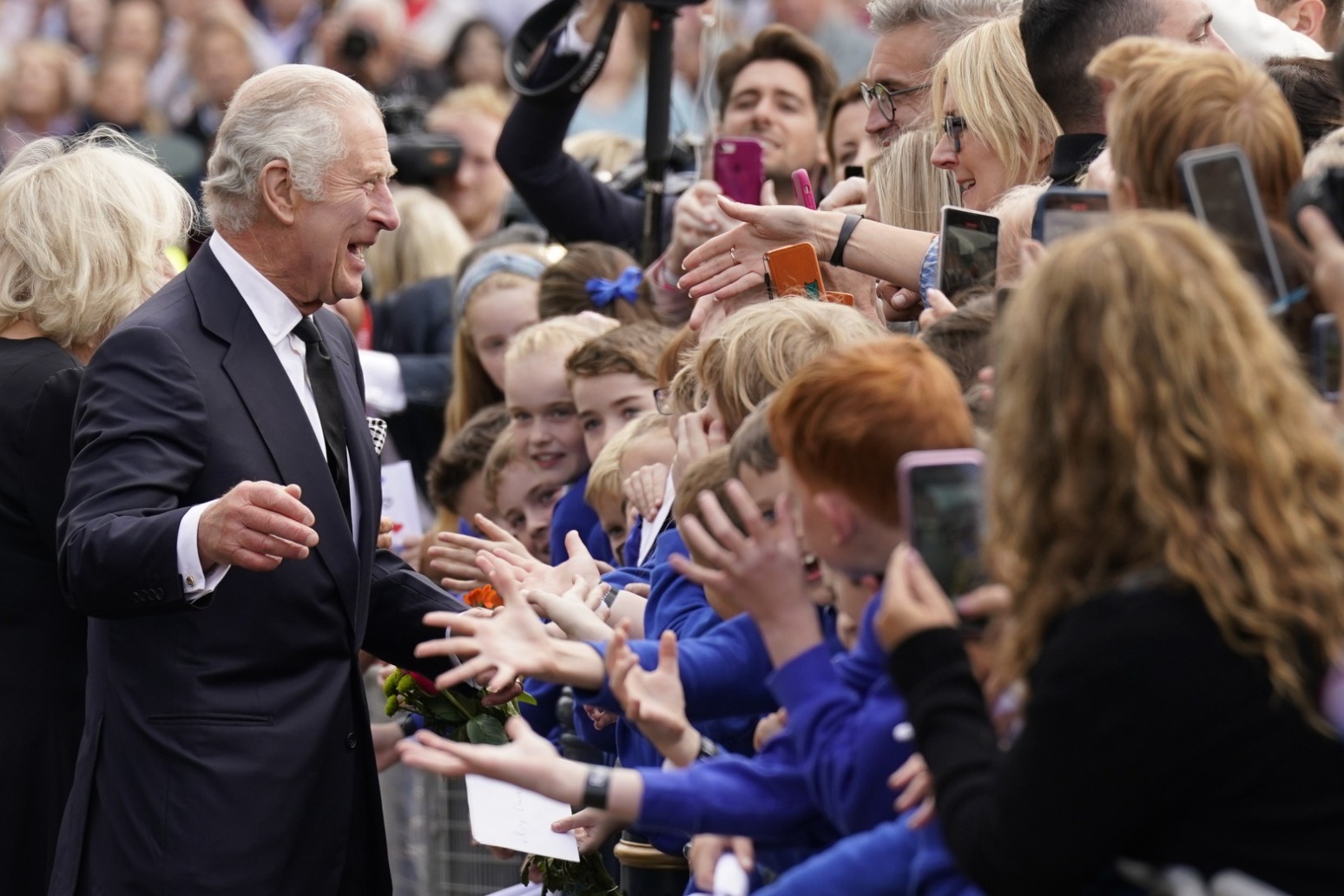 The visit by the King and Queen Consort to Hillsborough, a village where royal connections run deepest in Northern Ireland, was on a scale never witnessed before.

The visit by the King and Queen Consort to Hillsborough, a village where royal connections run deepest in Northern Ireland, was on a scale never witnessed before.

Thousands flocked to the normally quiet Co Down village, some arriving in the early hours of the morning, to get a coveted viewing spot for the arrival of Charles and Camilla.

A massive security operation had been put in place, essentially sealing off most of the village and lining the narrow streets with metal barriers.

In some places, the crowd was at least six-deep. Some waved flags, while others brought chairs, blankets and even picnics.

One of the first to arrive was Hillsborough man Robin Campbell, who had created special posters welcoming the King, which he was erecting from early in the morning.

He told the PA news agency: “Today means so much to me and my family, just to be present in my home village with my children to witness the arrival of the new King is a truly historic moment for us all.

“Although it is also a day tinged with great sadness as we witness a loving son coming to our village while we are all in mourning for the loss of a truly magnificent Queen and his loving mother.

“The royal family has a special place in the hearts of all within our communities.”

Among those who turned out for the King’s visit to Hillsborough Castle – the official residence of the royal family in Northern Ireland – was former boxing world champion Carl Frampton, who said he was honoured to be in attendance.

“It is a momentous occasion,” he said.

“Boris Johnson said it felt like the Queen would always be there.

“Now, we are getting ready to meet and see a new king.

“You can see how momentous it is by the number of people who have turned up here today.”

An hour before the planned arrival of the royal couple, hundreds of local people were given access to the area at the front of the castle, which is now carpeted with floral tributes left since the Queen’s death was announced.

Among them were young people from local schools, who clutched flags and bouquets of flowers.

Michael Poots, principal of Downshire Primary School in the village, said it was a “wonderful day”.

“It is great that as a school we can be part of it. We are so close to (Hillsborough) Castle and the children are greatly looking forward to it,” Mr Poots said.

“We feel as a village very honoured that they have chosen to come here, especially in these very sad times, especially for the King. It means a lot to us all and the close links that we have with the royal family in the village.”

Also at the gates was a woman who had brought her pet corgi, Connie.

There was a political aspect to the day, with Sinn Fein vice president Michelle O’Neill visiting the castle, and DUP leader Sir Jeffrey Donaldson speaking of the influence that the new monarch would have in advancing peace and reconciliation.

The first sign that the royal couple’s arrival was imminent was the presence of two helicopters hovering above the village.

The royal couple spoke to many of the people who had waited hours.

As Charles and Camilla looked at the sea of floral tributes, the crowd broke out into applause and cheers of “God save the King”.

Suzi Pickering was among those in the crowd who got a chance to speak with the royal couple.

Ms Pickering, from the 1st Hillsborough Brownies, attended the event with a number of other associated groups, including the Guides and the Rangers.

“It’s all very exciting. King Charles shook all of the girls’ hands and the Queen Consort as well,” she told the PA news agency.

“He asked the girls if they had escaped from a very important school lesson to be here. They were all very excited. A lot of giggling and ‘yeses’ going on. The Queen Consort Camilla asked which guiding association they were from as well.

“They took a lot of interest in us, particularly Camilla, as she was interested in who they were and where they were from.

“They all got to shake their hands, which is so exciting for them.

“It is a huge honour to be part of history. The last few days is all about history and something they will remember as well.

“They are such lovely people and seem so genuine and want to be amongst everyone and it means a lot to them that everyone is so supportive of them.”

Inside the castle, the King met local political leaders and received a message of condolence on behalf of the people of Northern Ireland from the Speaker of the Stormont Assembly, Alex Maskey.

The King said in return: “It is fitting that we should meet at Hillsborough, which my mother knew so well, and in whose beautiful rose garden she always took such pleasure.”

At the end of the two-hour visit to Hillsborough Castle, thousands of people had remained to cheer and clap as Charles and Camilla left.

The King waved at the crowds as he was driven off.