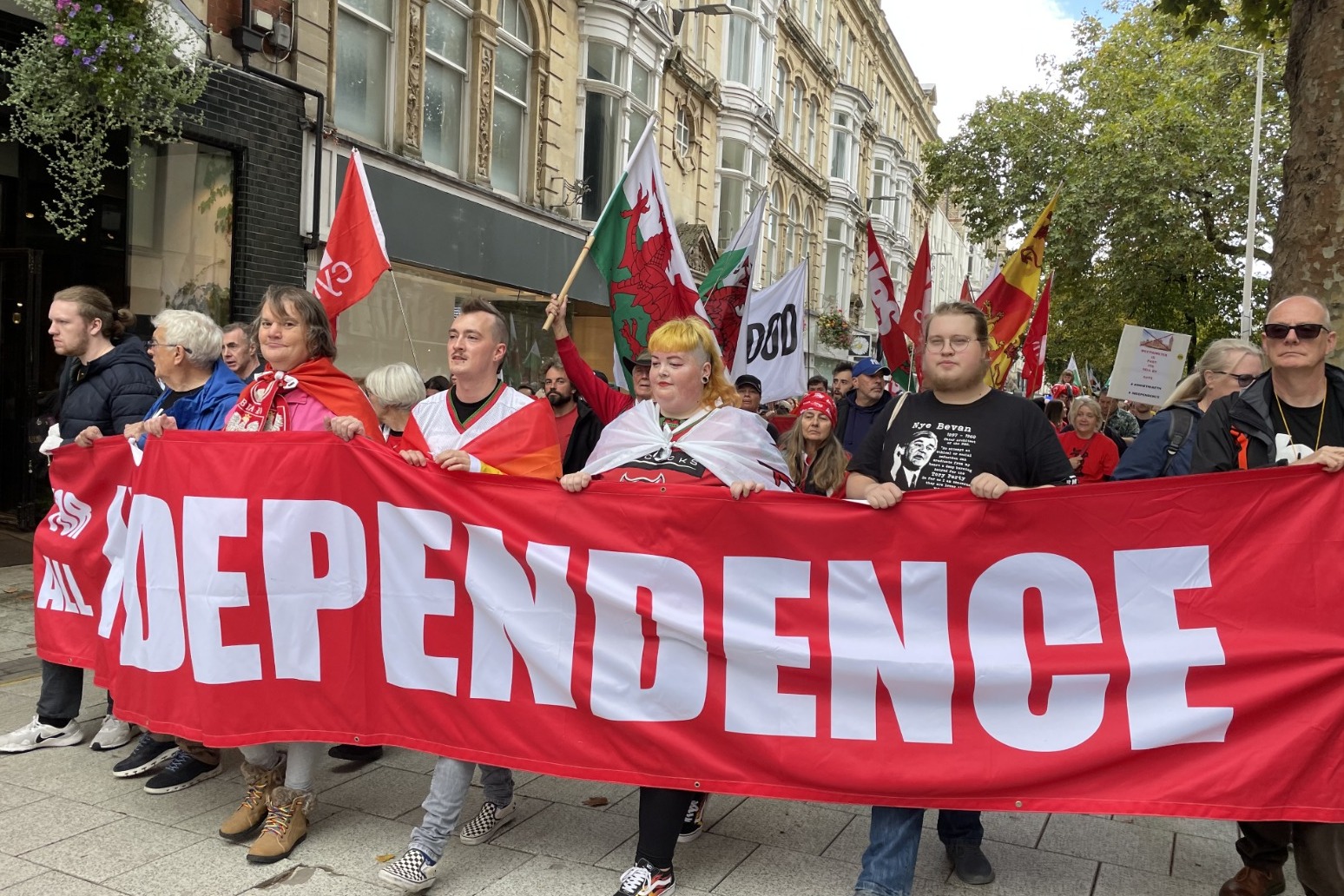 Thousands of people have joined a march in Cardiff in favour of Welsh independence.

The rally was organised by All Under One Banner Cymru (AUOB) and Yes Cymru who claim the UK Government in Westminster no longer has the best interests of Welsh people in mind.

A similar event held in Wrexham, North Wales, in July attracted around 8,000 supporters.

There were concerns about how campaigners would get to Saturday’s march given the effects of this weekend’s national rail strikes but AUOB Cymru were still confident of a large turnout.

At the front of the march, and helping to carry a long sign that says “Annibyniaeth” meaning Independence, was Plaid Cymru leader and Senedd member Adam Price, and ex-Plaid leader Leanne Wood.

Mr Price told the PA news agency he believed marchers were buoyed by a report published on Friday claiming to debunk the idea that Wales is “too small and too poor to thrive as an independent nation”.

Harriet Protheroe-Soltani, from AUOB Cymru, said: “Given the UK Government’s recent tax cuts for the rich and continual erosion of workers’ rights it’s important, now more than ever, that people come along and demonstrate that we do not trust Westminster to look after the interests of Wales.”

The head of YesCymru, Gwern Gwynfil, said he wanted the march to be a “loud and joyful celebration”.

The march began at midday in Windsor Place and travelled in a 1.5-mile loop along Queen Street, St John Street, Working Street, The Hayes, Mill Lane, St Mary’s Street, High Street, and Duke Street before returning to the starting point.

Speeches and performances are expected to take place afterwards.

Fringe events have been organised to take place into the evening including an independence gig which will be held at live music venue The Globe.

A recent YouGov poll on behalf of ITV Wales and Cardiff University found over a fifth (24%) of Welsh voters would back an independent Wales in a hypothetical referendum.

A Cardiff Council worker told PA they believed there around 4,800 people on the march.

Student Mirain Owen, 17, travelled to the march from Swansea with her father and said she believes support for independence is growing among young people.

“I’m here to support independence as a young person that wants to see a better future for Wales,” she said.

“I don’t think that the current situation is working for Wales and I think we definitely need to see some change as recent events in Westminster have shown us so clearly.

“I think young people are more supportive of independence than ever before because everything that is happening is affecting our lives, we can’t do nothing.”

Taking to the stage, Lewis Jones called the UK Government “the worst show on in the West End at the moment”.

“It’s time we stand up as a nation on our own two feet.

“We are big enough. We are strong enough. And we will fight for this.

“Let this day light a fire in all our bellies,” he ended to applause.