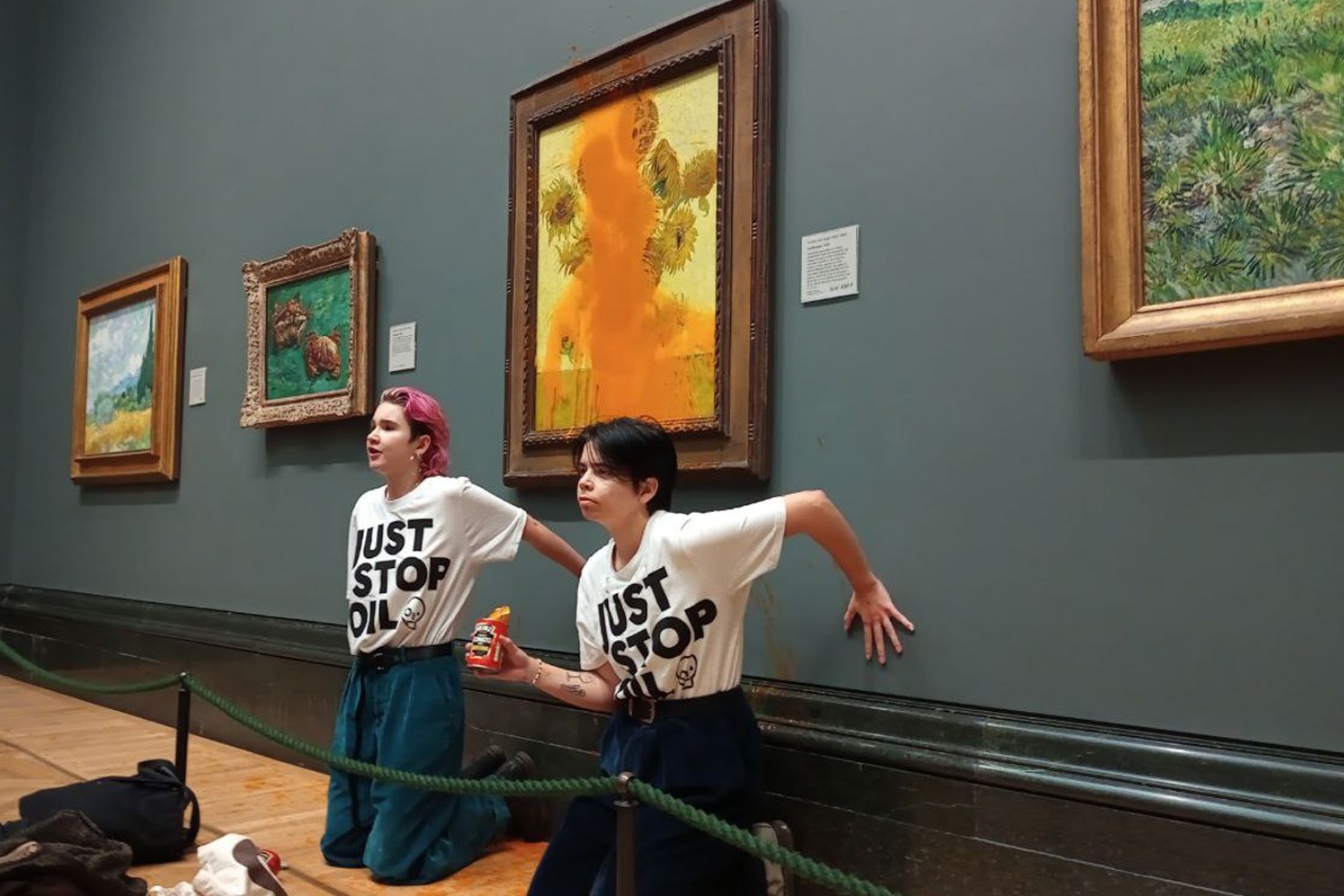 Two women are charged in relation to soup being thrown on the painting at the National Gallery, while a third is charged over paint sprayed on to the rotating New Scotland Yard sign – both during protests in London on Friday.

It comes after Just Stop Oil and Extinction Rebellion demonstrators descended on Westminster, central London, on Friday to protest against the Government’s approach to the environment.

Anna Holland, 20, from Newcastle, and Phoebe Plummer, 21, from Lambeth, south-west London, both pleaded not guilty to criminal damage to the frame of Van Gogh’s painting in a hearing at Westminster Magistrates’ Court on Saturday morning.

Meanwhile, Lora Johnson, 38, from Southwold, Suffolk, pleaded not guilty to charges of criminal damage at the same court after paint was sprayed on to the New Scotland Yard sign.

Appearing in the dock together, Holland and Plummer spoke only to confirm their name, date of birth, addresses and to enter pleas of not guilty to criminal damage to the value of less than £5,000.

Prosecutor Ola Oyedepo said the pair threw the “orange substance” knowing there was a “protective case” over the actual painting, though damage was caused to the frame.

Ms Oyedepo said it is unclear at this stage what the value of the damage is but said it is “significantly below the £5,000 cost threshold”.

Katie McFadden, defending, said: “The prosecution needs to prove that damage has been caused.”

She said the “extent of the damage would be relevant to the proportionality assessment” in weighing up their right to expression.

District judge Tan Irkam released the pair on bail on the condition they do not enter galleries or museums and do not have paint or adhesive substances in a public place.

He set their trial for December 13 at City of London Magistrates’ Court.

Meanwhile, Johnson, who appeared in the dock for a separate hearing, also spoke to confirm her name, address and enter a not guilty plea.

Ms Oyepedo said Johnson was part of a protest group which gathered at the New Scotland Yard building on Friday afternoon.

“They glued themselves to the floor while she went up to spray the sign,” she said.

The prosecutor said £4,750 has been spent trying to remove the paint from the sign and the ground under it.

Mr Irkam released Johnson on bail on the condition she does not have paint or adhesive materials in a public place and set her trial for November 23 at City of London Magistrates’ Court.

“The court will not prevent you from lawfully protesting,” Mr Irkam said.

Some 28 arrests were made in relation to Friday’s protests, the Metropolitan Police said, while 25 others have been bailed pending further enquiries.