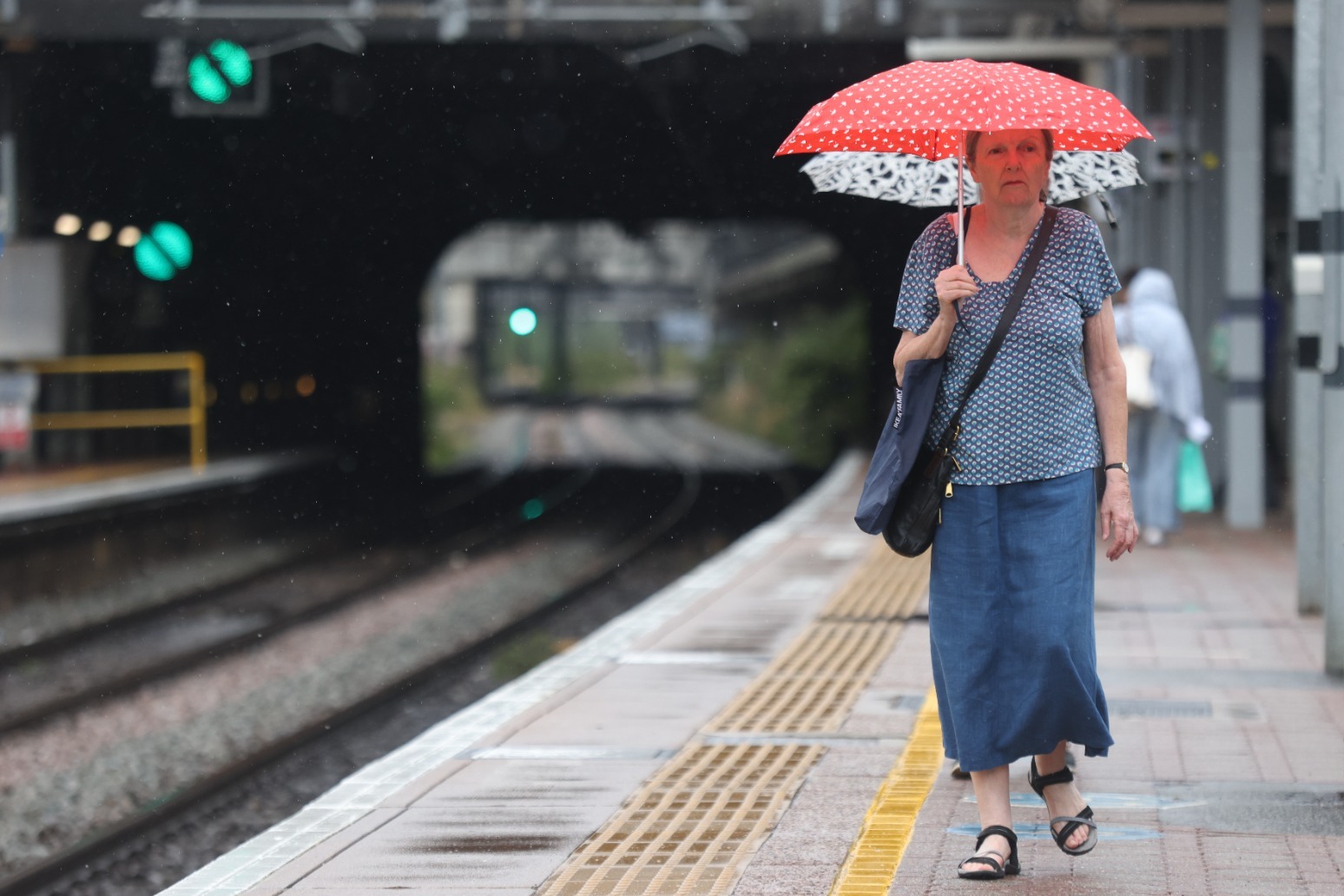 Torrential downpours have battered the UK, with one part of Essex seeing more than an inch of rain in just one hour.

Andrewsfield in Essex reported 1.43 inches (36.4mm) of rain in an hour, rising to 2.2 inches (56mm) in three hours, on Thursday morning as heavy showers and storms swept across the east and south east of England.

A yellow thunderstorm warning is in place for London and the South East, the East of England and the East Midlands until 3pm – with forecasters saying flooding is likely amid “intense downpours”.

Annie Shuttleworth, a meteorologist at the Met Office, said: “We have seen a band of quite heavy and thundery rain push across central and south-eastern parts of England, and it’s going to continue to push into East Anglia through the rest of today.

“Overnight, Andrewsfield received 56mm of rain in three hours, and in six hours, 61.4mm of rain.

“The average rainfall for August for an area in southern England is 67.8mm, so it’s not greater than that but it’s close – so it was a significant amount of rainfall.”

In east London, Dagenham Heathway station was closed on Thursday morning due to flooding caused by heavy rain, while a number of exits were closed at Charing Cross station in central London.

The Met Office has warned of difficult driving conditions and some road closures due to spray and standing water.

Train delays and potential loss of power and other services are also likely.

The Environment Agency has issued nine alerts for areas where “flooding is possible”, including in the south London boroughs of Merton, Sutton, Kingston upon Thames, Richmond upon Thames, Wandsworth, Lewisham, Bromley, Greenwich and Croydon.

The weather warning comes after a period of dry weather which has seen drought declared across swathes of England, with parched grass and struggling crops, streams drying up and river, reservoir and aquifer levels low, and hosepipe bans brought in for millions as heatwaves pushed up demand for water.

As of Wednesday, the UK as a whole had had only 46% of the average total rainfall for August.

The bank holiday is expected to be largely dry with warm sunny spells, though possibly wetter in the North West.

Temperatures could climb to 30C or into the mid-20s depending on how the high pressure builds, the Met Office said.

Spokesman Grahame Madge said: “We’ve definitely switched from the hot and dry regime to something that has rain in the forecast.”

While the downpours will mean this month will “catch up a bit” with rainfall totals, he said: “It’s certainly going to be a dry August for the whole of the UK.”

And he said some areas had gone without any significant rainfall from the middle of June until last week.

“We’ve had below average rainfall for such a long time, it’s going to take a period of above average rain to make it up,” he warned.

Whether that period of above average rainfall is looming remains to be seen, with the Met Office set to bring out its seasonal forecast for the likely conditions over the next few months next week.

It is possible for the weather to turn around: the severely dry summer of 1976 was followed by rain that meant that rainfall levels had caught up with the average by the end of autumn.