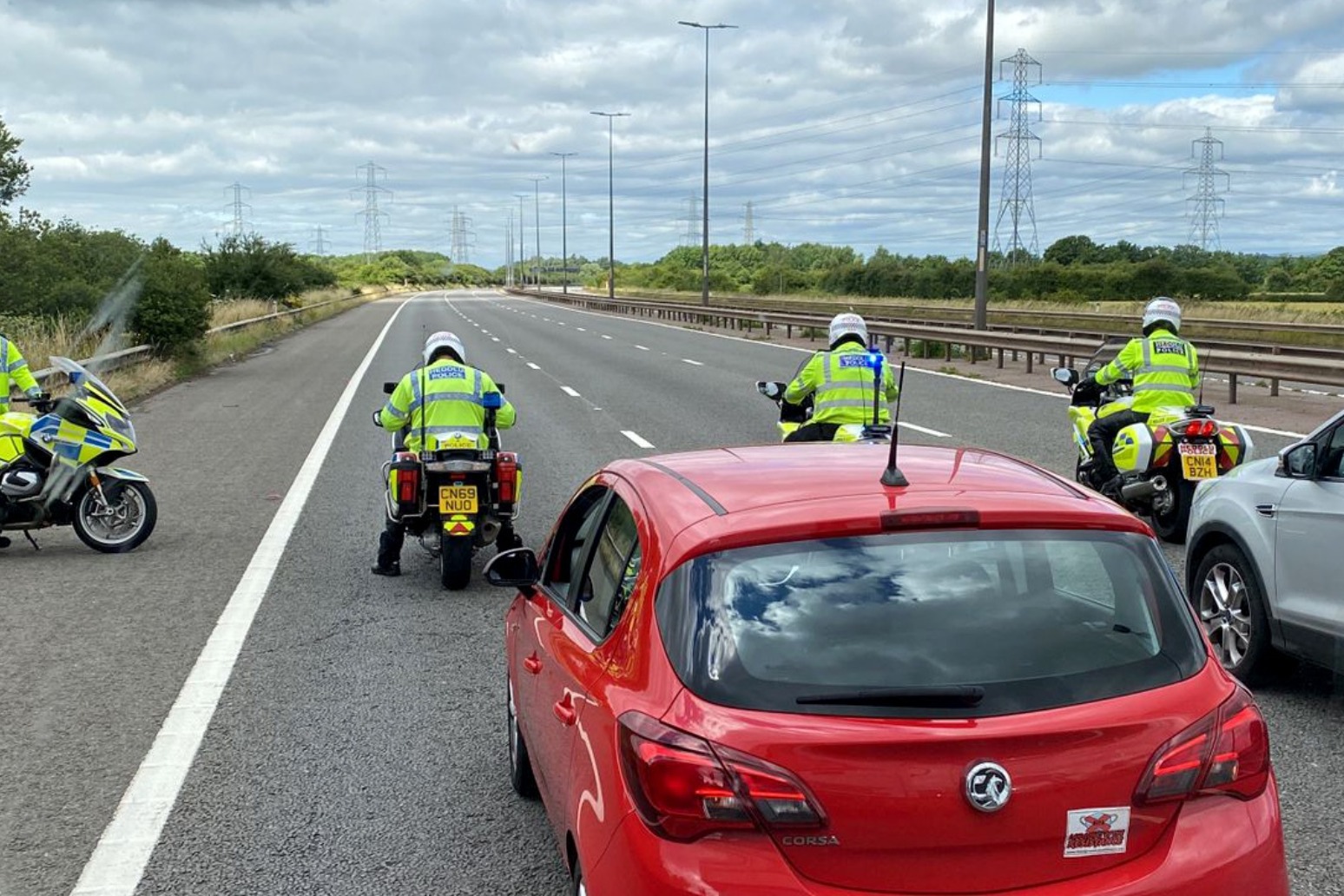 Police have arrested 12 people during the M4 protest over fuel prices for driving too slow, saying the demonstration was putting emergency services “at risk”.

Fuel protests have been taking place across the UK as drivers call for a cut in fuel duty, gridlocking motorways and major A-routes with a series of rolling go-slow roadblocks.

Those who took part in a roadblock across the Prince of Wales Bridge, between South Wales and Somerset, on Monday morning were stopped and told they were being detained for driving below the agreed 30mph speed for a prolonged period of time.

“Over the last two weeks, we have been working jointly with a number of partners to ensure that emergency and critical services could continue and to prevent serious disruption to both road users and local communities,” Chief Supt Harding said.

“The right to protest under UK law must be balanced with the rights of the wider community who may be affected.

“Along with partners, we identified that failing to comply with the legal notice requirements would lead to emergency and critical services being restricted therefore posing a risk to local communities, action was taken when I deemed these risks existed.

“We are aware of other driving offences, not connected to the protest, such as the use of a mobile phone whilst driving. These offences will be dealt with appropriately.”

The protests, which started at around 7am, are understood to have been organised via social media under the banner Fuel Price Stand Against Tax, although police said their discussions were held with the organiser of the M4 ‘stand up to fuel prices’ protest.

Rolling protests started simultaneously on the M4 from Magor services in South Wales and the junction 20 Almondsbury interchange near Bristol, with police telling demonstrators they could not stop and must drive no slower than 30mph.

Police escorted the two blockades as they crossed the River Severn but prevented them from completing the return journey by halting the convoys and arresting the drivers.

The Prince of Wales Bridge was closed for over an hour in both directions.

They were loaded into a police van and taken to Newport Central police station, according to eyewitnesses.

Their cars were seized and passengers were conveyed back to Magor service station, near Caldicot.

Some of the passengers said those arrested have been “unfairly” targeted by officers.

Among those arrested was former HGV driver from Cwmbran Vicky Stamper.

The 41-year-old said she and her partner Darren had to give up jobs in Bristol because they could no longer afford the fuel.

She said: “We had to leave those jobs because it was costing us £380 a week just to get to and from work.

“I then lost a job two weeks ago because the company couldn’t afford to put fuel in that many lorries so last in, first out.”

She said the situation has taken an emotional toll on her and her family.

Talking before the protest about the disruption it will cause to drivers, Ms Stamper added: “We’re doing this for us and for them. If they want to have a moan, they should join us instead.”

Asked what she would ask Prime Minister Boris Johnson to do, she said: “Resign.”

He said before the protest that it was costing him hundreds of pounds in fuel to get to work every week due to price hikes.

“My only option soon will be to put the welding gear in the shed and call it a day, maybe go on the dole.

Sharon Downs, 46, from Pontypridd was also taken in after taking her HGV on the protest.

Ms Downs, a saddle fitter, told the PA news agency: “I’m fed up of putting so much fuel in my car. I’m self-employed and people rather not get their saddles fitted now than cover the travel cost because of the fuel hikes.

“It means I’m losing business but also it means the horses are suffering.”

“I’m disappointed more people haven’t come with us today but I think the price of fuel is sadly exactly why there’s not more here. And needing to be at work,” she added.

“But something needs to be done about it, we need the tax on fuel to be brought down before this country is on its knees.

“We need more protests and we need more people to join in so our voices are heard, and the Government know we won’t stand for it any more.”

There were also protests on the A38 in Devon and at a Tesco petrol station in Shepton Mallet.

Further afield, there were demonstrations on the M54 in Shropshire, near the Ferrybridge services in West Yorkshire, on the A64 in the York area, on the M180 near Scunthorpe, and on the A12 in Essex.