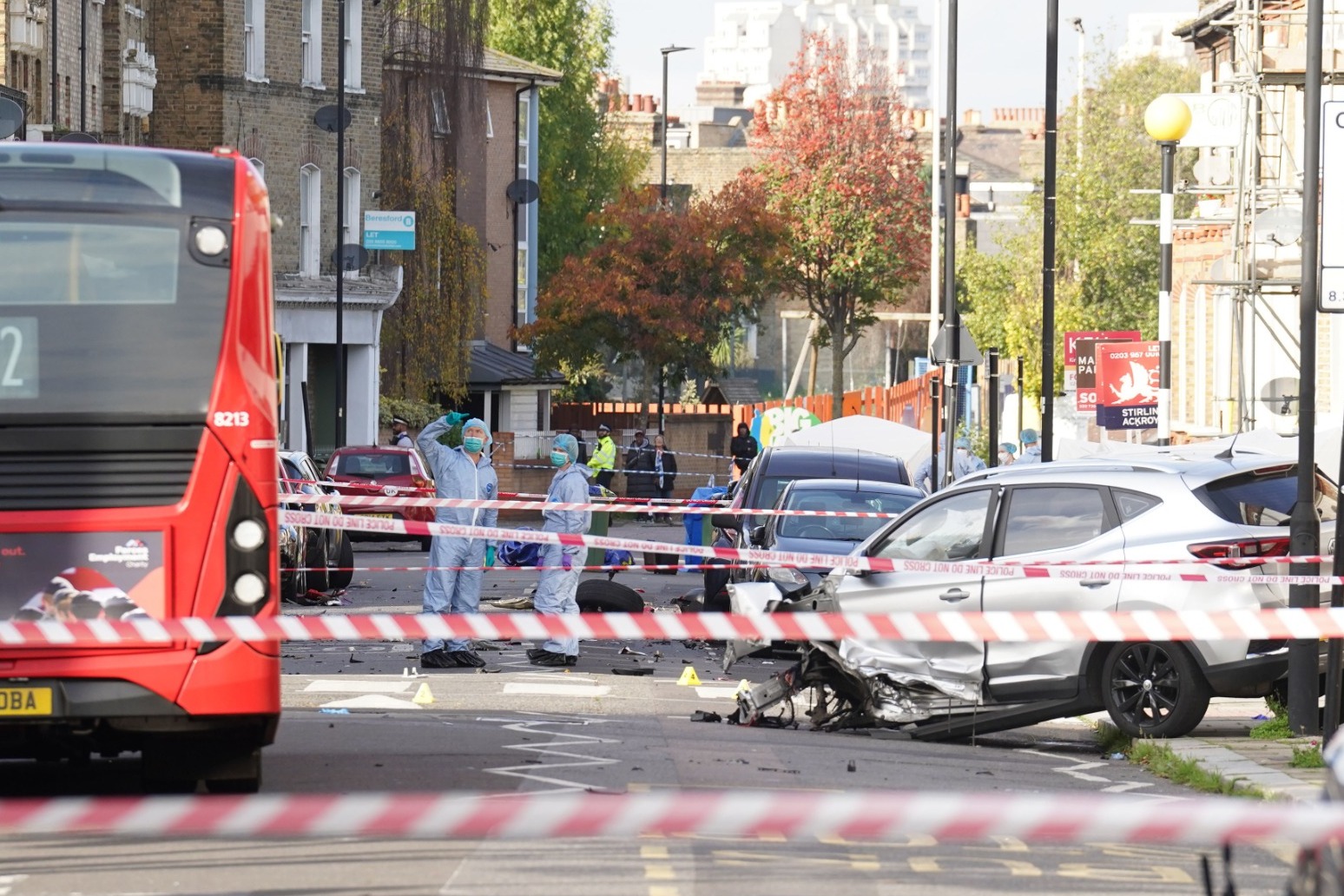 Two men have died after a car chase that ended with a Deliveroo driver being knocked off his moped and another man fatally shot.

The victims, both aged in their 20s, were killed in Railton Road, Brixton, shortly before 8pm on Sunday after locals heard shots ring out and vehicles crashing.

Police said two cars were involved in a chase when one hit a moped and a number of parked cars.

A man then got out of the crashed car and was chased and shot dead by a gunman from the second car.

On Monday, a Deliveroo driver working near the scene said he knew one of the victims, who had been making his last delivery of the day when he died.

Paulo Silva, 42, described him as a “good boy” and “young” and said he had been planning to go to Brazil in December.

Reports on social media suggested that the shot man was a drill rapper.

Haani Samuels, a 30-year-old electrician, who has lived on Railton Road with his girlfriend for six months, said he initially thought the noise was fireworks.

He said: “My girlfriend said, ‘oh, is that gunshots?’ And I initially thought, well, obviously not. But then it was followed by a big crash.”

Mr Samuels added: “I kind of came out and saw that there was shells from a bullet on the floor. We thought ‘bloody hell’.

“We saw the ambulance delivering CPR on someone for quite a while, my girlfriend was quite upset. It’s not something you want to see anywhere, but especially on your doorstep.”

The Metropolitan Police have not yet confirmed the identities of either of the victims but said that work was continuing to inform their families.

Chief Superintendent Colin Wingrove said: “I am shocked and saddened by this incident. Our thoughts are with the families and friends of the two young men who have tragically lost their lives.

“This incident will cause a great deal of concern throughout the local community and across London.

“We are supporting Specialist Crime detectives, who are working at pace to confirm the specific sequence of events and identify and arrest those responsible.

“Local officers are on the scene and patrolling the local area to speak to local residents, seek witnesses and provide visible reassurance.

“I would urge anyone with any information, however small, to come forward to help bring whoever is responsible to justice.”

White forensic tents had been put up at the scene on Monday, where debris could be seen strewn across the road.

There were two crashed vehicles – a silver car which had lost one of its tyres and a moped.

A 322 bus was left parked within the police cordon.

The latest violence means four people have been killed in two shootings in five days in the English capital, after a separate incident in Ilford, east London, on Tuesday that left two men dead and a third injured.

This follows a spate of shootings in July in which three men died in separate attacks in six days.

Before these killings, up until July 19 this year, there had been no firearms deaths in the English capital since October 31 2021.

In the whole of 2021, there were 12 fatal shootings among a total of 134 homicides recorded by the Metropolitan Police.