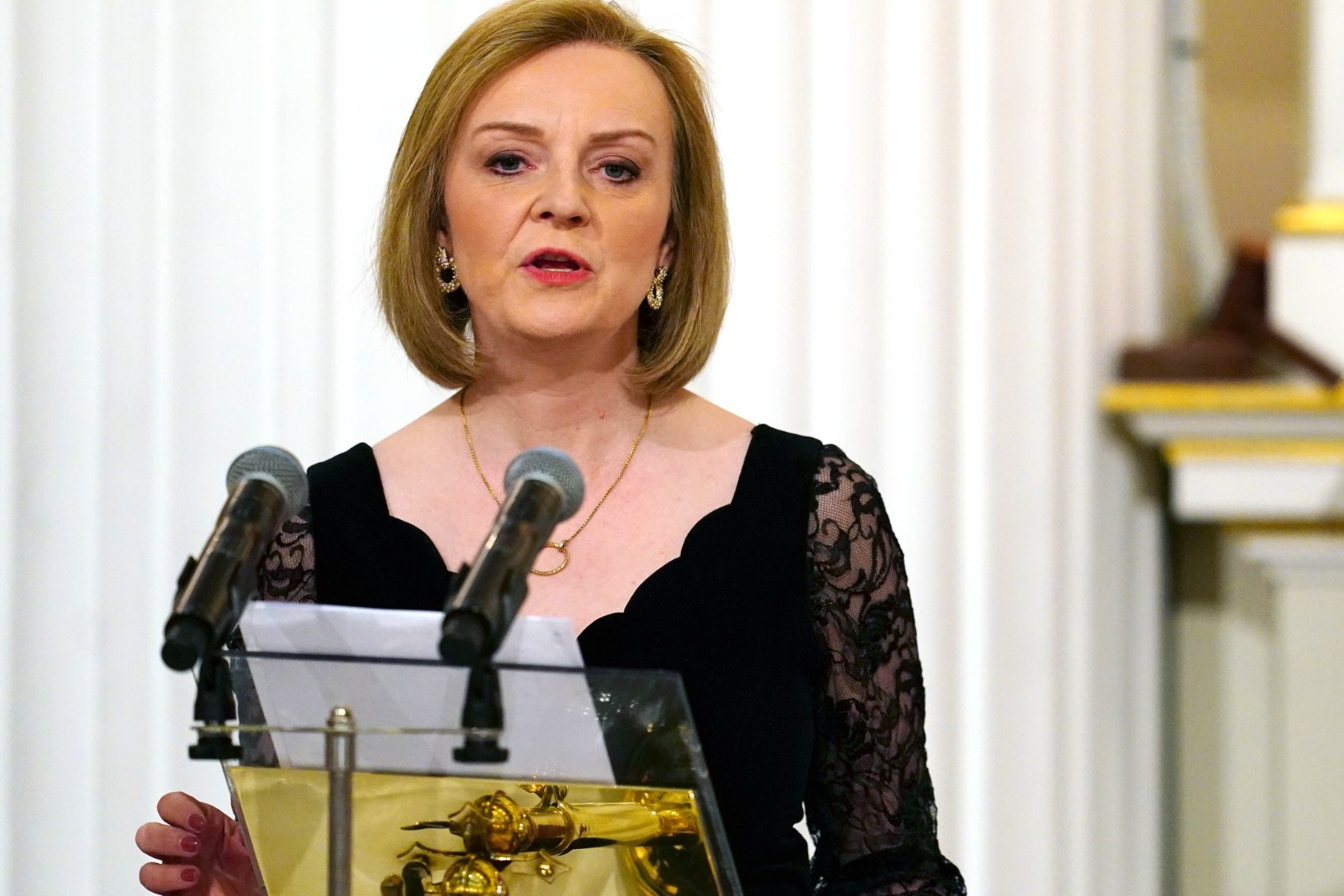 The UK will not “shy away” from taking action on the Northern Ireland Protocol, the Foreign Secretary has said in a push for treaty reform.

Liz Truss said some proposals put forward by the European Union during months of discussions on the post-Brexit treaty would “take us backwards” as she argued against introducing “more checks, paperwork and disruption”.

The Foreign, Commonwealth and Development Office (FCDO) said that, under EU proposals suggested in October, trading arrangements could worsen and everyday items could disappear from shop shelves in Northern Ireland.

It comes as the Democratic Unionist Party (DUP), which came second in last week’s Assembly elections in Northern Ireland, warned the Prime Minister it would not nominate a deputy first minister to form an Executive until “decisive action is taken on the protocol”.

The Foreign Secretary said: “The current EU proposals fail to properly address the real issues affecting Northern Ireland and in some cases would take us backward.

“Prices have risen, trade is being badly disrupted, and the people of Northern Ireland are subject to different laws and taxes than those over the Irish Sea, which has left them without an executive and poses a threat to peace and stability.

“The answer cannot be more checks, paperwork and disruption.

“Our preference has always been for a negotiated solution but will not shy away from taking action to stabilise the situation in Northern Ireland if solutions cannot be found.”

In a move to highlight the impact full implementation of the protocol could have, Foreign Office officials said that if grace periods in the so-called “sausage wars” were not in place then Lincolnshire sausages and other chilled meats from Great Britain would need a veterinary certificate to enter Northern Ireland.

The department cited figures suggesting that at least 200 retailers in Great Britain have stopped delivering to customers in Northern Ireland amid increased trade friction.

The FCDO said full protocol controls would also provide powers to search people’s bags for food, such as ham sandwiches, on departure from the ferry to Northern Ireland.

Pet owners would meanwhile need to pay up to £280 for certificates and jabs for their pets to go on holiday in the UK, the department added.

The UK Government has also lamented that some VAT cuts cannot be applied to Northern Ireland as the protocol means EU rates still apply there for goods.

Ms Truss’ latest comments follow reports that she is set to move to discard large portions of the protocol after giving up on Brexit negotiations with the EU.

The FCDO, in a release on Tuesday, said European Commission vice-president Maros Sefcovic had “made clear” in a call to the Foreign Secretary last week that the EU “did not have, and in his view would never have, a mandate to renegotiate the protocol” or to go beyond the existing proposals.

The Times reported that officials working for Ms Truss have drawn up draft legislation to unilaterally remove the need for checks on all goods being sent from Britain for use in Northern Ireland – a breach of the treaty negotiated by Mr Johnson in 2019.

The move has reportedly triggered an internal row among senior ministers, but Commons Leader Mark Spencer said the UK Government could not rule out needing to unilaterally suspend parts of the protocol if reform talks are not entered into by the bloc.

Asked on BBC Radio 4’s PM programme whether the UK would not “act unilaterally” on the protocol, Mr Spencer replied: “I’m certainly not ruling that out.

“I think at some point in the future, if the EU won’t come to the table and won’t help us solve the challenges that Northern Ireland is facing, then we will have to look at what we can do as a UK government.”

The EU’s Mr Sefcovic, in a statement, said: “The protocol, as a cornerstone of the Withdrawal Agreement, is an international agreement.

“Its renegotiation is not an option. The European Union is united in this position.”

Sinn Fein vice president Michelle O’Neill on Tuesday said that the protocol is “here to stay” and called on the DUP to join an executive at Stormont.

Now Playing
Kylie Minogue - I Should Be So Lucky