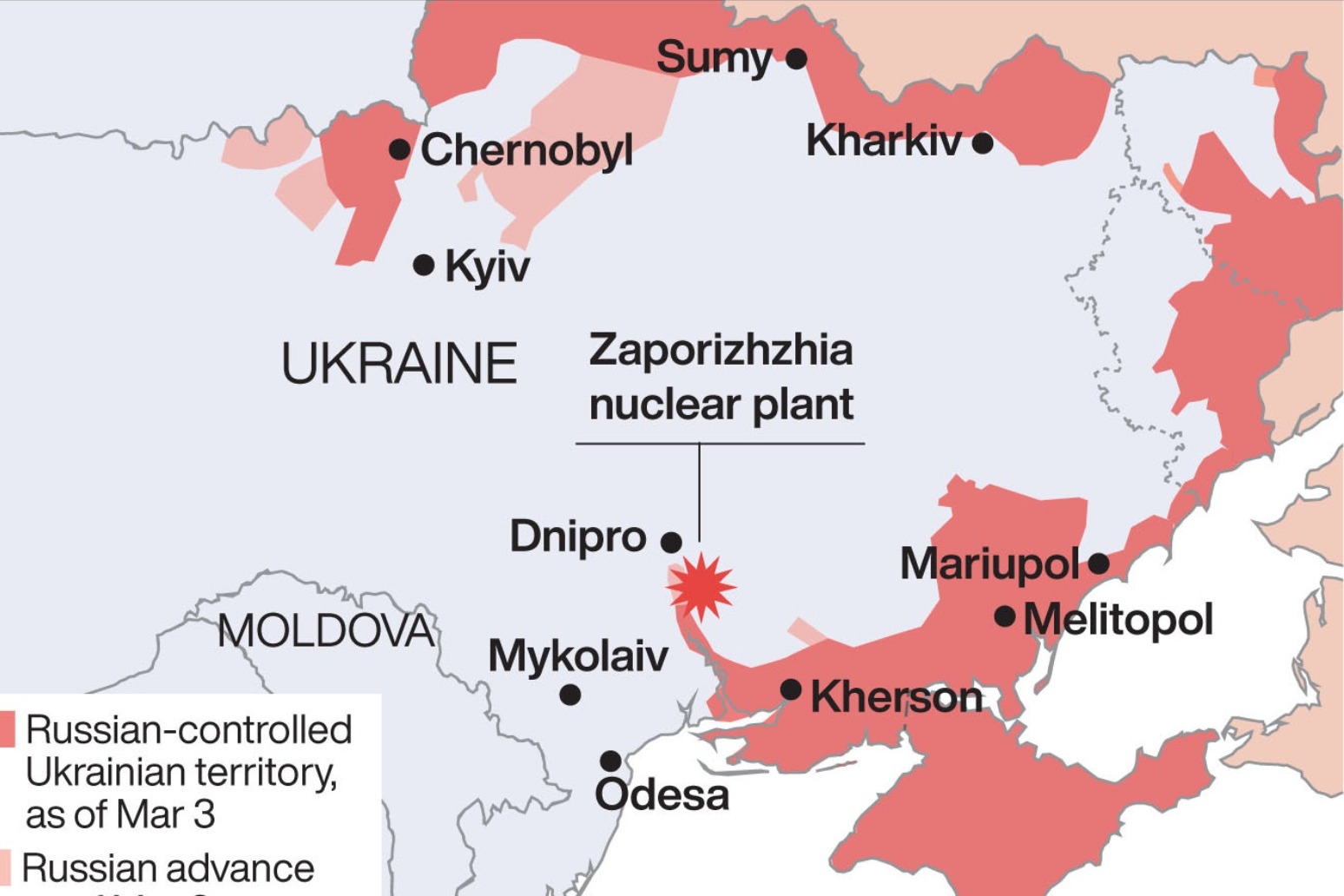 A UN inspection team has arrived at Ukraine’s Zaporizhzhia nuclear power plant on a mission to safeguard it from catastrophe, reaching the site amid fighting between Russian and Ukrainian forces that prompted the shutdown of one reactor and underscored the urgency of the task.

The visit from the 14-member expert delegation from the International Atomic Energy Agency (IAEA) came after months of negotiations to get inside Europe’s biggest nuclear plant.

Arriving in a convoy of SUVs and vans, the inspectors were led by IAEA director Rafael Grossi.

Later in the day, Mr Grossi reported that the group had collected important information at the plant and would continue its assessment. The visit was expected to continue until Saturday.

“The key things that I wanted to see, I saw,” Mr Grossi said.

“Despite a difficult situation and circumstances, (the staff at Zaporizhzhia) are very professional in their work.”

As the experts made their way through the war zone towards the complex, Russia and Ukraine accused each other of shelling the area and trying to derail the visit. The heavy shelling delayed the team’s progress towards the plant.

Energoatom, Ukraine’s state nuclear power company, said Russian mortar shelling had led to the shutdown of one of its reactors by its emergency protection system and had damaged a backup power supply line used for in-house needs. One of the plant’s reactors that was not operating was switched to diesel generators, Energoatom added.

“There has been increased military activity, including this morning until very recently,” Mr Grossi said during the journey, adding that after being briefed by the Ukrainian military he had decided to keep moving despite the risks.

“Weighing the pros and cons and having come so far, we are not stopping.”

Mr Grossi, who personally negotiated with Ukrainian authorities to allow the team’s passage, noted earlier that the risks were “very, very high” in the so-called grey zone between Ukrainian and Russian positions, but “we consider that we have the minimum conditions to move”.

“We are taking all the necessary measures to ensure that the plant is secure, that it functions safely and that the mission accomplishes all of its plans there,” he said.

The Zaporizhzhia plant has been occupied by Russian forces but run by Ukrainian engineers since the early days of the six-month-old war.

Ukraine alleges Russia is using the plant as a shield, storing weapons there and launching attacks from around it, while Moscow accuses Ukraine of recklessly firing on the area.

Fighting in early March caused a brief fire at its training complex, and in recent days, the plant was briefly knocked offline because of damage, heightening fears of a radiation leak or a reactor meltdown.

Officials have begun distributing anti-radiation iodine tablets to nearby residents.

“We have a very important mission to accomplish,” Mr Grossi said, adding that “we are going to start immediately an assessment of the security and the safety situation at the plant”.

“I am going to consider the possibility of establishing a continued presence of the IAEA at the plant, which we believe is indispensable to stabilise the situation and to get regular, reliable, impartial, neutral updates of what the situation is there,” he said.

IAEA spokesperson Michael Amdi Madsen said earlier in the week that the team would assess damage to the plant, determine the state of its main and backup safety systems and “evaluate the working conditions of the control room staff”.

Experts have expressed concern that the staff are overworked and stressed out from the occupation of the plant by Russian forces.

Ahead of the visit, Russia’s defence ministry reported that Ukrainian forces had unleashed an artillery barrage on the area and then sent a group of up to 60 scouts to try to seize the plant on the Dnieper River.

It said that the Ukrainian troops arrived in seven speedboats but that Russian forces “took steps to destroy the enemy”, using warplanes.

Russia said some of the Ukrainian shells had landed 400 metres from the plant’s No. 1 reactor.

The Russian-installed administration in the city where the plant is situated, Enerhodar, reported that at least three residents had been killed early on Thursday by Ukrainian shelling.

Meanwhile, Ukrainian officials accused Russian forces of shelling Enerhodar and a corridor that the IAEA team was set to go through.

Neither side’s version of events could immediately be independently verified.