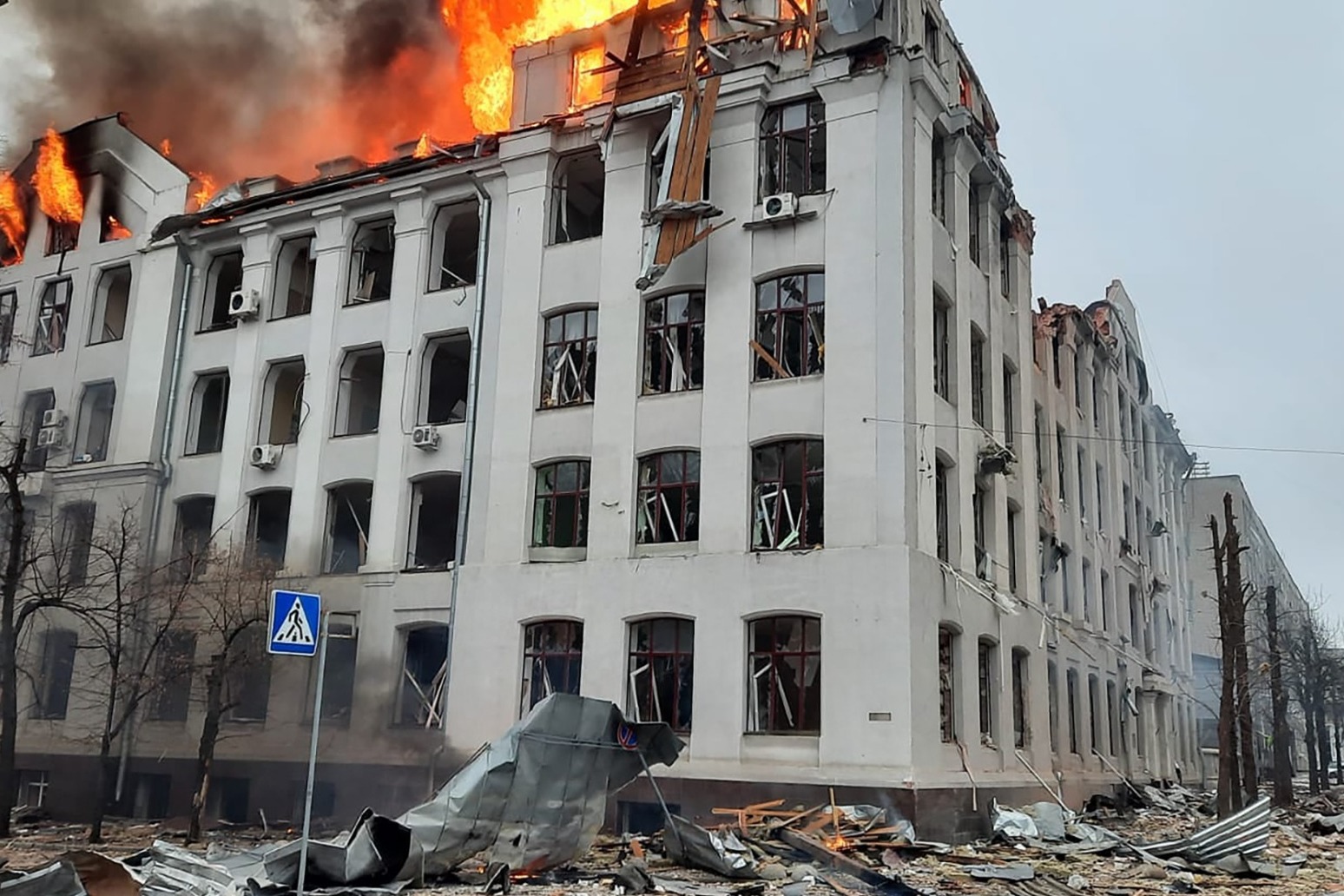 A war crimes investigation has begun after Boris Johnson accused Vladimir Putin of committing atrocities by bombarding cities in his invasion of Ukraine.

The International Criminal Court (ICC) opened an investigation on Wednesday night after Britain and 37 allies referred Russia over what the Prime Minister described as “abhorrent” attacks.

The move came as Ukraine’s capital Kyiv braced for a siege, its second-largest city Kharkiv reeled from further strikes and the control of port city Kherson was contested by the Russian military.

While according to the UN refugee agency, one million people have now fled Ukraine – making it the swiftest exodus of refugees this century.

The tally from UNHCR amounts to more than 2% of Ukraine’s population on the move in under a week. The World Bank counted the country’s population at 44 million at the end of 2020.

ICC prosecutor Karim Khan said work would begin “immediately”, with his team already collecting evidence, after the co-ordinated referral freed him to get to work without the need for judicial approval.

A second round of talks aimed at ending the fighting was expected on Thursday, but there were little hopes of a breakthrough.

Foreign Secretary Liz Truss will meet counterparts from the Baltic states of Estonia, Latvia and Lithuania as part of the UK’s effort to demonstrate support for eastern Nato allies.

The Prime Minister had spoken to Ukraine’s President Volodymyr Zelensky on Wednesday, promising further support and weapons for the forces resisting Russia’s military and sharing his “disgust” at the Kremlin’s attacks.

Strikes that damaged the Babi Yar Holocaust memorial in Kyiv and the central square in Kharkiv have caused revulsion, and Western allies fear it is a sign of a shift in Russian tactics further towards the indiscriminate targeting of urban areas.

Moscow’s international isolation was further displayed when the UN General Assembly voted overwhelmingly to demand it immediately withdraws its military from Ukraine, with 141 nations backing the motion and only five, including alleged co-aggressor Belarus, opposing it.

For the first time the UK explicitly accused Mr Putin of war crimes, with Downing Street claiming “horrific acts” were occurring on an almost hourly basis as population centres are targeted.

At Prime Minister’s Questions, Mr Johnson said: “Putin has gravely miscalculated; in his abhorrent assault on a sovereign nation, he has underestimated the extraordinary fortitude of the Ukrainian people and the unity and resolve of the free world in standing up to his barbarism.”

He added: “What we have seen already from Vladimir Putin’s regime in the use of the munitions that they have already been dropping on innocent civilians, in my view, already fully qualifies as a war crime.”

More than 2,000 civilians have died since the invasion began, Ukraine’s state emergency service said, although that figure has not been independently verified.

On Monday, Mr Khan said he planned to open an investigation into events in Ukraine “as rapidly as possible”, but the referral from the 38 nations also including Ireland, Germany and Spain allowed him to launch “active investigations”.

They will look for possible war crimes, crimes against humanity or genocide committed by any person on the territory of Ukraine.

“The UK will work closely with allies to ensure justice is done.”

Justice Secretary Dominic Raab, a former lawyer who has prosecuted war crimes, said the UK will assist the ICC in hunting down suspected Russian war criminals.

The deputy prime minister told The Daily Telegraph that Britain could house Russian commanders suspected of atrocities in its prisons – in addition to proving a safe haven for witnesses who testified against them.

He added that “few countries around the world” had the UK’s “lead information” which would likely prove “absolutely critical” to the ICC.

At PMQS, Mr Johnson promised to publish a list of people associated with Mr Putin who could be liable for sanctions, as he said “the vice is tightening on the Putin regime” through the restrictions imposed by the West.

But he was urged by Labour leader Sir Keir Starmer to immediately ramp up the measures against allies of the Russian leader.

Sir Keir, who called for Chelsea owner Roman Abramovich to face sanctions, said: “Now is the time to sanction every oligarch and crack open every shell company so we can prove Putin wrong.”

The Russian-Israeli billionaire later announced he will sell the club, with the “net proceeds” going to a charity supporting victims of the war in Ukraine.

UK officials have said more sanctions are coming, against oligarchs, Russian National Security Council members and banks, and that they believe the economic shock of the moves has been more significant than Mr Putin was expecting.

They said they wanted sanctions to go further, including the Swift payment system ban being applied to all Russian banks.

– The European Union announced that seven Russian banks were being excluded from the Swift system which allows fast and efficient interbank transactions.

– Ukrainian ambassador to the UK Vadym Prystaiko was given a standing ovation by MPs in the Commons.

The Russian defence ministry claimed that Kherson, in the south of Ukraine near the Crimean peninsula annexed by Russia in 2014, was under the “complete control” of Russian soldiers – but the Ukrainian military disputed this.

The lack of progress in meeting the aims of the invasion had led to a change in tactics, focusing on aerial and artillery bombardment of cities rather than the kind of lightning military advances originally envisaged by the Kremlin, Western analysts believe.